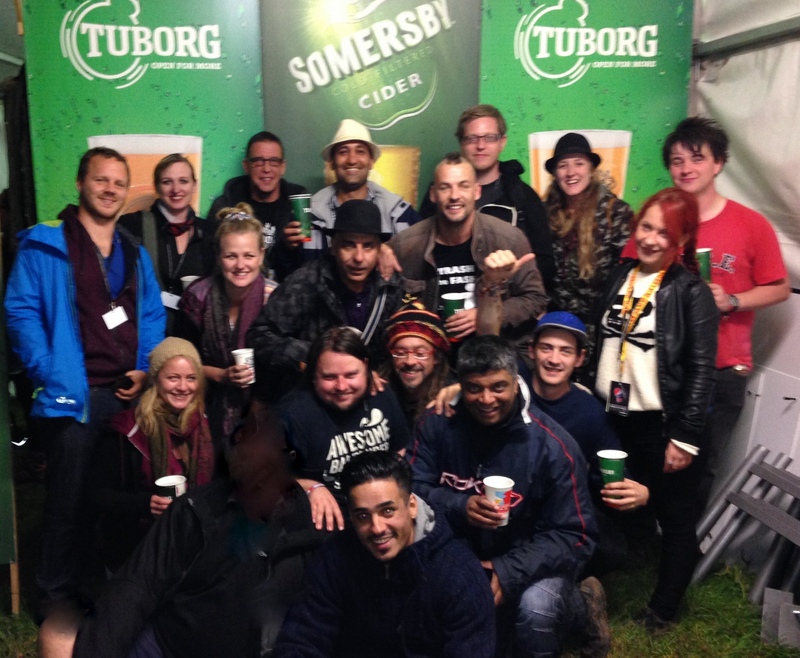 Wolverhampton, Bilston & District Trades Union Council organises teams of local trade unionists to work on bars at music festivals to raise our funds for our campaigning work. Over 20 summers at festivals at around sixty festivals; our volunteers  raised £38,700.

We only recruit local trade unionists prepared to support our aims and campaigns.

YOU MUST SUPPLY the following info:

if you have already worked for us then just send any updated details you have.

The sooner you reply, the more chance there is of getting a place.

We will be fined the industry standard £225 penalty fee on behalf of any volunteer who is found to be involved in a breach of the Code of Conduct (this includes failure to report for duty).
Dropouts, less than 7 days before festival, and no-shows at event will result in a reduction in our allocation for future events and you being dropped by us for future work.

What is the Workers’ Beer Company?

The WBC was set up by Wandsworth and Battersea Trades Union Council. They started at Glastonbury in 1986 running the beer tents and bars and organise and promote music festivals. They have paid over £7million directly to grassroots organisations such as trades union branches, campaigning groups, solidarity organisations and voluntary groups  for the work of the hundreds of volunteer workers they provide each summer.  The Beer Company uses the excess funds to continue to fund the Organising Centre for BWTUC which has led the fight in Wandsworth against the cuts and specifically the sale of school playing fields in Putney to pay for a free school in Battersea. It is also able to continue to support the TUC’s Tolpuddle festival in Dorset.

The Company grew up in the harsh years of Thatcher, building partnerships with organisations of the left, but also with commercial organisations, in order to generate the funds needed to campaign for a better quality of life for working people. Thousands of volunteers work in Workers Beer Company bars, pouring and serving drinks to fund the activities of their groups.
The Company’s unique blend of commerce, fun and fundraising has captured the imagination of the many people who have come into contact with it, and WBC banners are now a common site at some of the largest music events in the UK and beyond. Glastonbury, Leeds & Reading, Latitude etc
Apart from the large events, the Company is also involved in smaller trades union and community events, offering its expertise to unions, local authorities and voluntary groups to ensure their events go smoothly.
The Bread & Roses in Clapham is the Company’s first pub, an award-winning free house in Clapham, where the ethos of the Company continues throughout the year. Staff in the pub are not volunteers like those on site, but are covered by a model union agreement for pub staff, negotiated with UNITE, offering staff proper sick pay, holiday pay and perhaps the best wage rate in the country.
For further information about the Workers Beer Company, CLICK HERE It now also uses EBC name.

March 2018 – a postponed meeting of Battersea and Wandsworth TUC with the Workers Beer Company discussed our complaint and agreed to raise the rate of renumeration for volunteer-hours from £7 to £8 for this year and to increase regularly in future.

Feb 2018 –We had discussions at our delegate meetings and decided not to continue working with the Workers Beer Company/EBC while they were paying below national minimum wage for the hours worked by our volunteers.

The rate paid was £7/hour and we have made complaints to the Wandsworth and Battersea TUC who own the Workers Beer Company previously and formally last November.

After 19 years of our trades union council sending teams to festivals via WBC we took the decision that we would no longer be working for the Workers Beer Company while the rate paid for volunteer work remained below the National Minimum Wage.

The income that have we received from our volunteers’ work at festivals has been the main source of our income for the last two decades, over £38k. We do not have any alternative funding other than the affiliation fees which we receive and this decision will severely affect our future work; so it is not a decision that we have taken lightly.

Our work as a trades union council involves promoting trade union membership and highlighting illegal employment practices. We are not prepared to be involved in an industry that relies on illegal pay rates

9 November 2017 – letter we sent to Battersea and Wandsworth TUC

This was the 19th year that our trades union council has sent teams to festivals via WBC and we have been lucky to raise £38k over those years. I have personally volunteered for WBC for 26 years.

Our Delegate Meeting has discussed the hourly server rates paid by WBC/EBC, which your trades union council owns and asked me to raise the question in relation to the NMW.

When the National Minimum Wage was introduced in 1999 after campaigning by the trade union movement, including yourselves, at £3.60 /hour, the WBC paid £5.25/hr to organisations for server volunteers.

For the last two years the rate has been below NMW rate.

We understand that the NMW laws are being bypassed since the servers are volunteers, but payment has always been linked to hourly wage rates paid to organisations.

When bids are put in for festival bars WBC/EBC is presumably competing against companies that employ and so are obliged to pay at least NMW rates. Is operating at below NMW wage rate for staff costs not unethical?

We queried the rate last year with WBC/EBC and noticed subsequently their Terms and Conditions were altered for 2017 to:

“WBC offers a valuable package to the registered organisations to facilitate their fundraising – for each hour the volunteers work the value to organisations is £10.50,(this includes transport to/from the event, two meals per day and to drinks when their shift has ended and £7.00 directly back to the organisation”.

The deal for volunteers has always been the same and I presume there would be problems with recruiting and onsite logistics if that were not the case.

We feel that this is underhand terminology to circumvent accusations of paying at below NMW.

The WBC used to pride itself on paying above industry rates for servers, there is no pride now in the current rate.

Incidentally, as we are outside London we have had to provide our own transport for all festivals we have ever worked at, except for Glastonbury festival when all servers are expected to use WBC coaches as part of its green credentials, presumably linked to the contract with WBC.

Would you agree that the current rates are inadequate and please raise the issue with the WBC/EBC?.