Abdullah Ӧcalan is the imprisoned leader of the Kurdish liberation movement and the campaign is in solidarity with both his and the Kurdish people’s struggle for freedom from over a century of brutal repression and genocide.

The campaign is supported by the Wolverhampton, Bilston & District TUC, the TUC, UNITE, GMB, FBU, NEU, ASLEF, RMT, CWU, PCS, MU and others including UNISON branches

Nelson Mandela had agreed to provide asylum to Ocalan in 1999. The Kurdish leader was travelling to South Africa when he was abducted in Nairobi, Kenya, by Turkish and Western security agencies.

He was sentenced to death for treason, a sentence that was later commuted to life in prison. He has been serving his sentence under harsh conditions on Imrali Island, off the coast of Istanbul. A peace process initiated in Turkey in 2012 collapsed two years later. In recent years, the Kurdish liberation forces have played a leading role in the battles against the Islamic State group.

Ӧcalan has now passed his 20th year in a Turkish prison as the regime of President Erdogan ramps up its repression. The Freedom for Ӧcalan campaign’s central goal is to secure his release so that he can take his rightful and central place as the builder of peace in the region.

The brave Kurdish fighters, inspired by Ocalan, have been on the frontline in the fight against ISIS and are now threatened by Erdogan’s government. Turkey’s invasion of the region is causing a humanitarian catastrophe and the resurgence of ISIS.

The need for solidarity from the trade union movement couldn’t be more urgent.

Yesterday Mandela, Today Ocalan – abducted en route to asylum offered by Mandela, and imprisoned since 1999 by Turkey for “treason and separatism”, using a unique judicial process. Abdullah Ӧcalan is leader of the Kurdish liberation movement and the campaign is in solidarity with both his and the Kurdish people’s struggle for freedom from over a century of brutal repression and genocide, since they were left stateless after redrawing of colonial borders post WW1 and now separated over Turkey, Syria, Iraq and Iran.

Largest group of Kurds is in East Turkey, about 20% of the Turkish population; they follow the philosophy of Ocalan as are Kurds in Syria, with female autonomy and more women in leadership than the UK & US combined, after 100s years of oppression in the region.

In recent years, Turkey has invaded Syria to attack Kurds and assisted ISIS in their attacks on the Kurds who defeated ISIS.

3,000 Kurdish hunger-strikers around Europe resulted in legal visits after 700 lawyer requests were denied; held as single prisoner on island prison for most of term, now commuted to life, from death. Turkey is trying to isolate his ideas and his call for peace. Turkish Embassy blocked the Freedom for Ocalan campaign through pressure on Facebook.

Unanimous support for the campaign at 2019 TUC Congress.

Jan 2020 – The Court of Cassation of Belgium ratified the lower court’s judgement and ruled that Turkey’s Kurdistan Workers’ Party PKK is not a terrorist organization. PKK calling for peace not war.

Around 2,000 Kurds in Wolverhampton, though mostly Iraqi origin and not linked to Turkish Kurds.

The Kurds have more friends than just the mountains, they have international solidarity from the trade union movement.

I was called a terrorist yesterday, but when I came out of jail, many people embraced me, including my enemies, and that is what I normally tell other people who say those who are struggling for liberation in their country are terrorists. Nelson Mandela

Freedom for Öcalan: The UK Trade Union Campaign – In 2014 the UK trade union campaign movement were appalled at the manner in which the Turkish government prevented support for the Kurds crossing their borders during the battle for Kobani against the genocidal intent of ISIS.

Then in 2015 Erdogan failed to gain the absolute majority he wanted in the elections and proceeded to react in an aggressive manner and relaunched the brutal war against the Kurds.

In the aftermath of these events the trade union campaign – Freedom for Öcalan – was launched in 2016 in the UK parliament by UNITE and the GMB. Since then it has grown to have 14 major unions affiliated and is supported by the TUC. 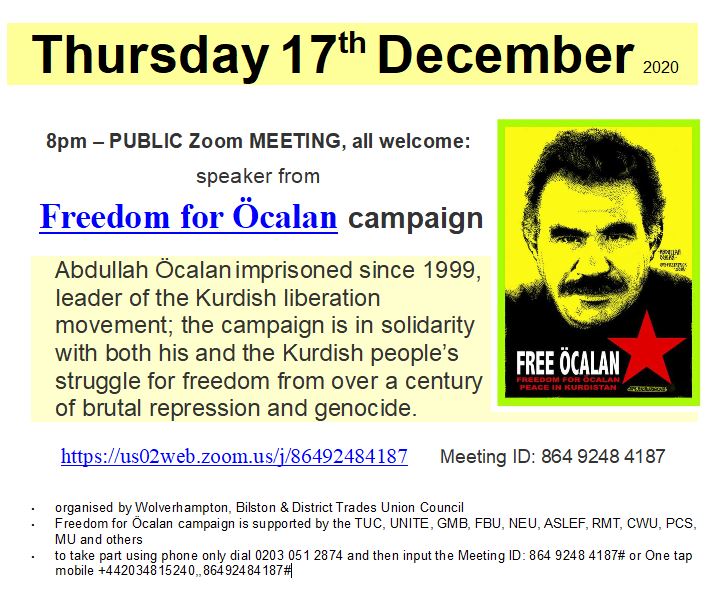