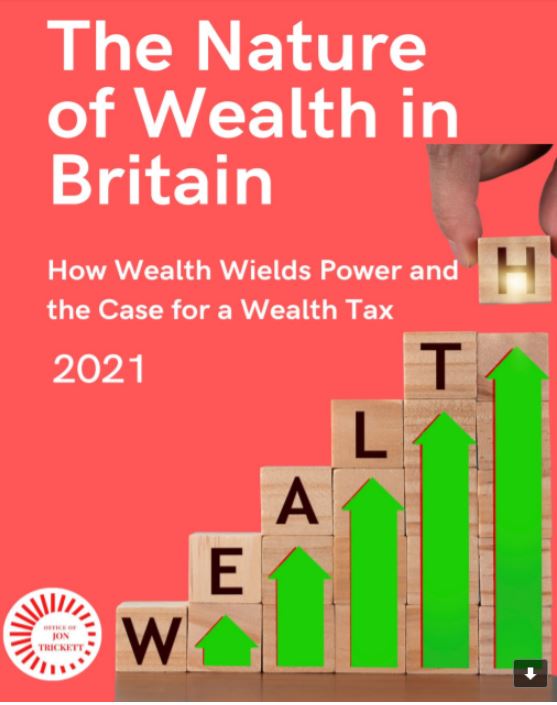 The Nature of Wealth in Britain:

a report by John Trickett MP that proposes a radical overhaul of our tax system.

The report includes four different options for a wealth tax, including a one off tax, an annual tax and a hybrid tax targeting increases in wealth.

The report shows that the median revenue of the four wealth tax options would come to £218.4 billion over the course of a 5 year parliament. Another option is to bring dividends and Capital Gains taxes into line with income tax, which would raise £37 billion and £90 billion respectively. Closing tax avoidance loopholes and tackling tax evasion would raise a total of £145.5 billion.

Approximately £490.9 billion in additional tax revenue could be raised over a period of 5 years and these are conservative estimates that take account of behavioural changes and administration costs.

This is money that could be spent on our neglected public services and vital national infrastructure. We could afford to plug the social care funding gap and to give our key workers a pay rise. We could reverse local government and education cuts. We could rebuild Britain into a dynamic Green economy that can compete with the best in the world.

In addition, these measures would also reduce extreme wealth inequality. Our political system has been rigged in favour of global corporations and the super-rich. The Pandora Papers have shown they play by a different set of rules to the rest of us. The next Labour government must put an end to this racket. The public expects nothing less.