No Pasaran! They did not pass. Mobilised at 18 hours notice, a sizable counter demonstration in Wolverhampton's Queen Square prevented the English Defence League's attempt to march though the city to the Cenotaph.

Once we raised our placards "Hope not hate", "We are all Wulfunians", "One city one community" and with chants of "racist scum off our streets", the police asked us to move from the central square out of public view into a side street. We argued that we should remain where we were and not allow the EDL to further intimidate shoppers and occupy our town centre. The police accepted this and we remained. They imposed an order under Section 14 of the Public Order Act 1986 to hold us behind a police line, this was extended after we continued our protest until the racists had all scurried away.

To our chant of "Not in OUR city", the police moved the 100 EDL supporters, many masked, around our peaceful counter protest, to wait for their coach. The EDL did not get anywhere near the Cenotaph.

500 Hope not Hate leaflets were distributed to onlookers. Bystanders joined in the counter protest but none joined the EDL.

Nick Kelleher, Secretary Wolverhampton Trades Union Council said that ”Our presence prevented EDL violence. This is our city not their city. We are the people who live here. We want to keep this place decent, diverse and happy.
We have not had a bad history in recent years of racial violence or disputes and we don’t want it started now. We have enough problems here already with unemployment, the cause of that is the capitalist system and the ConDem government and our ConDem council, the sooner we get rid of all them, the better for all of us working people, black and white.”

The police held them away from the public, while they waited for their West Bromwich coach which got most of those remaining back in time to end their afternoon in further unhappiness as the Potters gave the Baggies a hammering. the handful remaining were escorted away by police. 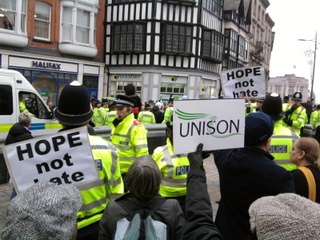 Read the Express and Star's coverage and video

watch the latest Hope Not Hate video explaining who the EDL are and read a briefing on the EDL.

22-11-10 Wolverhampton’s "Express &Star deputy editor KEITH HARRISON was distinctly unimpressed by those who took part in the EDL march:

Ugly morons who shame our streets with their ignorance

So what is the collective noun for a gathering of the EDL? A tribe of tripe? A muster of morons? What­ever, the wasted seed of the bulldog breed brought its snarling igno­rance to Wolverhampton – and ugly doesn't begin to describe it.

Not so much their 'protest' – a laughable 'look-at-me' effort akin to the Grange Hill uniform stand-off circa 1983 – but the people them­selves. Ninety-nine per cent male (I'm not sure about the other one, but it could have been a girl), universally thick and dressed in naff Jeremy Kyle chic.

Yet for all their sense of 'history', not one had the decency to wear a brown shirt. Come on boys, know your culture eh?

Still, they all loved the attention of Saturday morning shoppers who looked on with a mixture of bemuse­ment and amusement. "What a bunch of prats" chuckled an old dear, summing things up perfectly before head­ing into Marks and Sparks.

"We're the famous EDC', they chanted, like lower league football fans on a day trip to Old Trafford, along with such gems as "Poppy burners, off our streets! Whose streets? Our streets!".

At one point, as a rubber-necker stood on a bench to snatch a photo of the muster, 50 grubby index fingers pointed in unison as the cry went up "You're not English anymore!".

Poor lad. I suppose that was it for him then; stripped of his citizenship for taking a picture of 'the famous EDL'.

I'm pretty sure that's not the free­dom our boys fought for in two world wars, but trying to argue the point with these knuckle-draggers would be like talking to the (Berlin) wall.

After 20 minutes standing around, hiding their faces, huddling against the cold and making eye contact only among themselves, a big fat pasty bloke crackled an invitation over a megaphone for 'anyone who wants to join us, step forward now'.

He would have had more joy selling tickets for a Gary Glitter comeback show.

Eventually, the 'O.B' (Old Bill, geddit?) moved in to surround the tripe and scuttle them down within sight of Queen Square, before the lunchtime Sky match kicked off and the mob moved on to more pressing matters.

It all went fairly smoothly apart from one potential security flashpoint when the police cordon missed the entire 'EDL Lanesfield Division' lurking behind their lines.

Not to worry though, he caught up soon enough."

Labour leader Councillor Roger Lawrence said he be­came aware of the event on Friday evening and had "no time to clarify with the po­lice what they were doing".

He said: "They didn't have a permit to meet or to march and they should not have been allowed to do it.

"I will be writing to Wolverhampton police and the police authority to see what we can do to prevent this sort of thing happening again. 1 am not happy with the way it has been dealt with from the beginning.

"We need to send a clear message that these people are not welcome in our city."

Some officers are believed to have had rest days can­celled. John Grant, treas­urer of Wolverhampton and Bilston Trades Union Coun­cil, protested against the EDL with a 40-strongpoup taking a stand against a "vile attitude."

He said: "We were there to say these people were not welcome in our city – they were peddling hate."