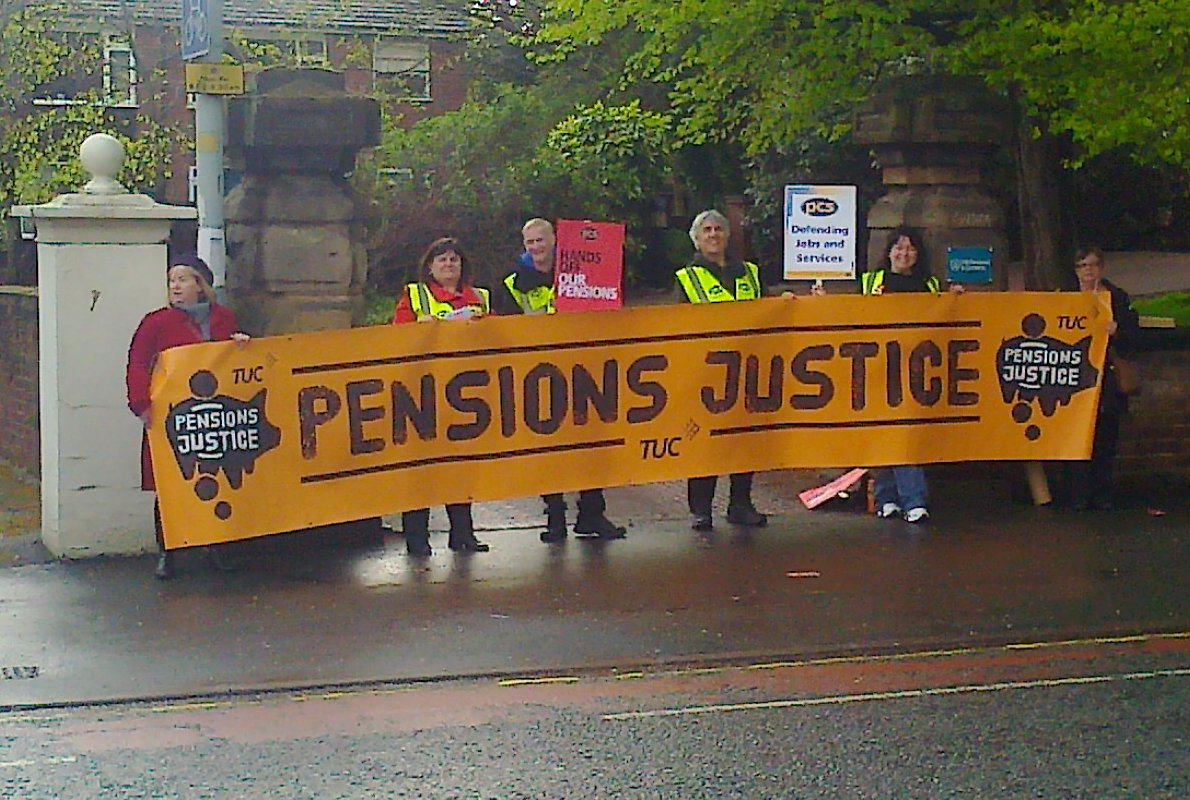 PCS, UCU & UNITE Health national strike with other unions across the civil service, health and education

took strike action locally & nationally on 10 May, followed by more action at the end of June 2012.
UNISON Local Government settled their pensions dispute after improvements were won and 90% accepted in a ballot, September 2012. 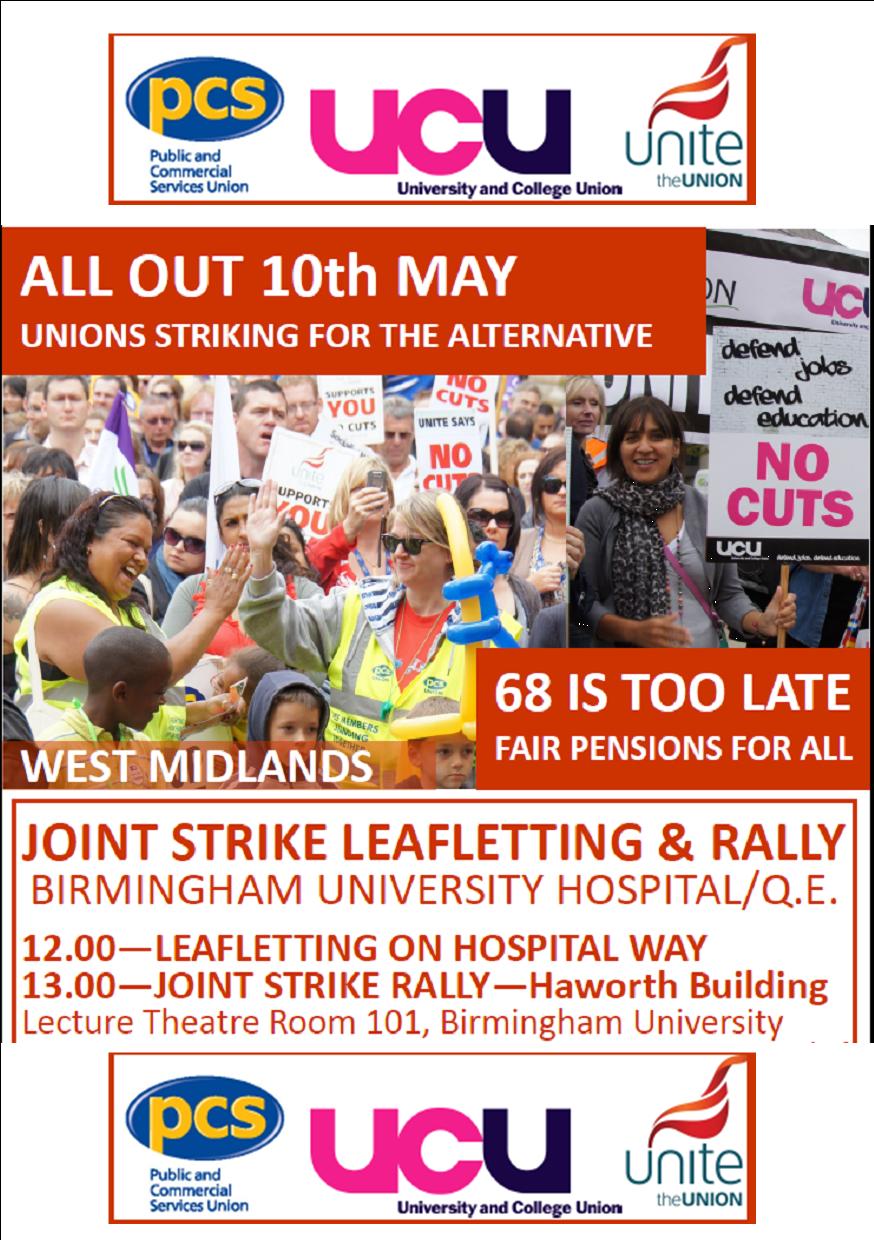 Thursday 10th May
PCS pickets from 6.45am @ Deansgate off Tettenhall Road
and @ Crown House

As well as this there will be national, regional and local protests; political lobbying; and co-ordinated, targeted action in employer groups and sectors.

More information about this on  www.pcs.org.uk/nec17apr

Plans are designed to help build the maximum possible level of co-ordination between unions, to press the government for more meaningful negotiations.

The e-petition ‘Public & Private Pension Increases – change from RPI to CPI’  recently reached over 100,000 signatures and created a debate  on 1 March 2012 in the House of Commons to consider its suitability for debate when Parliament returns in September.
West Midlands Pension Fund has hit back at claims that local authorities across the UK ‘had a combined pension deficit of £54 billion in 2010 to 11.’

The claims were published by the Taxpayers’ Alliance  (April 12 2012). In reply, Mark Crutchley, Head of Communication, Marketing and Business Support at Wolverhampton-based West Midlands Pension Fund told City People: “The Local Government Pension Scheme (LGPS) is one of the very few public sector pension schemes with funds set aside to meet liabilities.

“The LGPS nationally shows a strong cash flow that reflects a pattern that has been the historical position and one that will be repeated for many years into the future. There are no problems such as ‘black holes’ or ‘deficits’ in meeting the current commitments. Current cash flows are positive and expected to be so well into the future – the next 10 to 15 years.

Did you know that only Cyprus, Latvia and Estonia pay their pensioners less than in the UK?

Did you know that two and a half million pensioners in the UK live below pensioner poverty level. 3.5 million live in fuel poverty?

Did you know that the value of the state pension has been in decline for 30 years. From being worth 25% of average male earnings, it is now worth just 15%

Did you know that just over a decade ago nearly half of all private sector workers were in a workplace pension scheme; today it is only a third?

On 30th November we witnessed the biggest strike this country has seen since the General Strike of 1926. Over 2.5 million people walked out. It was the biggest blow yet against the Government’s austerity plans.
The Government have attempted to divide unions by offering minor improvements to their original proposals.
This deal still retains the Government’s key attacks on our pensions.
The offer still means we have to work longer, pay more and get less.
From the unions:

Labour ‘not speaking’ for workers
Mark Serwotka speaking to Hardtalk’s Stephen Sackur explains why they won’t be contributing a single penny to the Labour: http://bbc.in/yNJG8Z

Unite unanimously rejects NHS pensions offer and teachers are not happy either
The government’s latest proposals on NHS pension ‘reform’ – the ‘Heads of Agreement’ document – have been unanimously rejected by Unite, the largest union in the country. Unite’s health sector national industrial committee (HSNIC) rejected the ‘Heads of Agreement’ as a basis for a satisfactory outcome. http://bit.ly/A2Uys1. The NUT challenges the Coalition offer: http://bit.ly/A1DJnO and NASUWT is also opposed to the proposed settlement: http://bit.ly/xXyR0A

Thousands protest over tax dodgers
More than 31,000 people have written to Revenue and Customs to demand that big businesses are chased for all the tax they owe. The action has been co-ordinated by the 38 Degrees online campaign group. http://bit.ly/wcj5at

BMA considering industrial action over pensions
Doctors and medical students are being urged to complete a survey on whether the government’s final offer on the NHS pension scheme is acceptable and, if not, what action they would be prepared to take. A formal ballot on industrial action could follow. http://bit.ly/zlu6Xg

More than 12 members of the power workers’ union GENOP/DEI, including the President, were arrested in November for protesting against part of the Greek austerity measures – the cutting off of power to people unable to pay a new property tax, levied regardless of income or wealth and added to all electricity bills They could be jailed for up to five years. Send in your messages of support .http://bit.ly/wwpbRZ