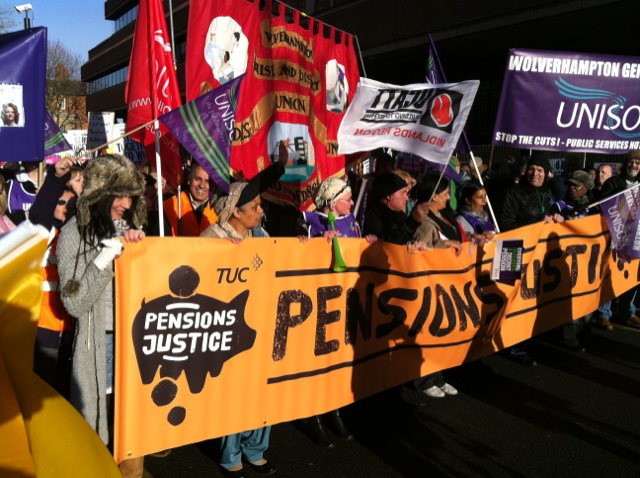 The proposed national strike in continued defence of pensions is now regional with NUT and UCU striking in London but not this area, on Wednesday 28 March.

PCS- Civil and public servants have rejected by a massive margin the government’s attempts to make them pay more and work longer for a worse pension, and given the go ahead for further industrial action.

In a consultation ballot held by the union – representing more than half of all staff in the civil service and its related agencies – 90.5% of respondents rejected the government’s proposals for a new pension scheme.

In what is the largest vote for action in any national ballot the union has held, 72.1% said they supported continuing the campaign, including with further industrial action alongside other unions. The turnout was 32.8%.

The union says this overwhelming rejection should bring the government back to the negotiating table to talk about the key issues over which ministers have consistently refused to move:

·       Increasing contributions from 1 April, with the money raised going to the Treasury to pay off the deficit

·       Linking the normal pension age with the state pension age, set to rise to 68 and possibly beyond

·       Devaluing pensions through the imposed switch in inflation indexation, which is still subject to a legal appeal in the High Court

The union’s national executive committee will meet on Monday 19 March to consider the results alongside the latest positions of the other unions, and make a decision on the way forward.

PCS general secretary Mark Serwotka said: “Civil and public servants can see that this government simply wants to make them pay for the mistakes of bankers and politicians, and have rejected by a massive margin this attack on their pensions.

“Ministers must now seriously engage in negotiations on the core issues if they want a settlement.

“The vote shows we remain committed to resisting this government’s attacks on pensions, jobs and pay, and to working with other unions to build further co-ordinated industrial action.”