Every year more people are killed at work than in wars. Most don`t die of mystery ailments, or in tragic `accidents`. They die because an employer decided their safety just wasn`t that important a priority.

Worker`s Memorial Day takes place every April 28th – as an international day of remembrance and action for workers killed, disabled, injured or made unwell by their work.

Supported by both the TUC and the government`s Health & Safety Commission and has been marked annually since 1992 by Wolverhampton, Bilston & District Trades Union Council and the Black Country Urban Industrial Mission.

The slogan for the day is:

“Remember the Dead,   Fight for the Living“

The trade union movement `remembers the dead`, by organising memorial events all over Britain.

We must also `fight for the living` by ensuring that such tragedies are not repeated:

highlight the preventable nature of most workplace accidents and ill health and promote campaigns and union organisation in the fight for improvements in workplace safety. 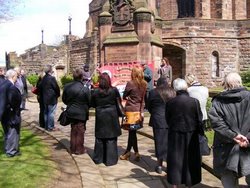 Workers Memorial Day is on the 28th April every year.

28th April – It is our day, workers and our families and our trade unions, to focus on health and safety at work, both in our workplaces, and at events locally, nationally and worldwide.

Every year there are thousands of events across the world on WMD attended by millions of people. There are hundreds in the UK.

The point of the Day is two fold:
to Remember the Dead and also
to Fight for the Living

For free posters – A3 & A4 – send your postal address and No of each size you want to mail@gmhazards.org.uk , to see a picture of current poster go to http://www.gmhazards.org.uk/2009%20poster.JPG

Events
There are events all over the UK see http://www.hazards.org
And http://www.tuc.org.uk

The real figures for deaths due to work are below as the HSE official figures understate the case very badly! Below an article published in Safety and Health Practitioner in December 2009 -The Whole Truth- http://www.shponline.co.uk/article.asp?article_id=8265&viewcomment=1

Although IOSH, the HSE, and others are working hard to debunk the many myths surrounding health and safety, the biggest ‘untruth’ is the claim that only ‘200-odd’ people are killed in the UK by work each year. Hilda Palmer, of the Hazards Campaign, argues that the true figures for work-related deaths, injuries, and ill health are many, many times higher.

Every year, on Workers’ Memorial Day (28 April), the Hazards Campaign makes the case that the evidence supports a figure of up to seven times as many deaths caused by work incidents as that officially cited by the HSE. The regulator’s headline figure is limited to those deaths reported to it and to local authorities. It does not include those from other enforcement agencies, such as the Maritime and Coastguard Agency, and excludes members of the public and also those killed by occupational illness.

A more realistic estimate, which includes work-related road-traffic deaths and suicides attributed to work-related stress, is 1500-1600 a year. (For more than ten years, the Hazards Campaign has demanded that work-related road-traffic deaths are reported under RIDDOR, added to the official death-at-work statistics, and brought under the protocol for investigating work-related deaths. In recent years we have been joined in this call by the TUC, trades unions, the Centre for Corporate Accountability, RoSPA, and IOSH.)
But even that figure is the tip of the iceberg; if we include the many thousands who die from illnesses caused by their working conditions the total could be as high as 50,000 a year!

Using the evidence-based estimates of work-related harm provided by various researchers would ensure the appropriate policy development and allocation of resources. Failing to expose the impact of employers’ non-compliance and criminal negligence on our health and our lives serves only to support the Treasury in capping and cutting funding to the enforcement agencies. It also adds fuel to the deregulators at the Department for Business, Enterprise and Regulatory Reform (BERR), who view health and safety as an unnecessary burden on employers, and gives support to the media ‘conkers bonkers’ hype about health and safety law and enforcement being excessive.

More importantly, it underestimates the actual risk workers face, and wrongly suggests we can safely rely solely on employers, when the reality is that far more workers suffer appalling working conditions that put them at risk of injury, death or illness, at huge cost to themselves, their families, and the economy. Far from being complacent about the health and safety record in this country, we need to be honest and open, and examine what is really going on.

As the chair of the HSE branch of the Prospect union, Neil Hope-Collins, put it: “Until the government and society acknowledge the true impact of failing to manage and regulate occupational health and safety, our members working in the enforcing authorities will struggle for the recognition, funding, and support needed to help save workers’ lives.”

Earlier this year, the HSE released the provisional fatal injury figures for 2007/08, which claimed 229 workers lost their lives as a result of accidents/incidents at work in 2007/08, compared with 247 in 2006/07, and that four people die at work every week in Great Britain.1 This implies the figure is a total for all those killed in work-related incidents, but we would argue that the true figure is nearer to four people killed a day. The HSE fails to mention that not all workers killed in all workplaces are included here, nor that those dying from work-related illness are excluded but it is at least honest about the fact that the figures don’t include road-traffic accidents involving at-work drivers that resulted in deaths, nor deaths from industrial diseases, which is an improvement on previous years.

But the HSE figures also exclude another important group – non-workers killed by work activities. The Hazards Campaign argues that the figures should include members of the public killed by a work activity, such as a scaffold collapse, train crashes, and work-related road-traffic accidents. Such incidents should be included as part of measuring the overall state of health and safety, and the risk work activities pose to the general public.

In 2007/08, the HSE recorded 358 deaths of members of the public. More than two thirds of these (263) were due to suicide, or trespass on to railways. Even taking these out of the equation, this would leave 95 deaths to be added to the 229 worker deaths, giving a sub-total of 324. To this should be added the number killed in road-traffic accidents involving ‘at work’ vehicles recorded by the Police, which the HSE, Department for Transport, and RoSPA estimate as 1000 a year.2 This brings the running total to 1324.

To that should be added deaths in coastal waters investigated by the Marine Accident Investigation Board- such as in fishing, tug work – and those reported to the Civil Aviation Authority, which, from press reports, we estimate to be about 30 a year. Furthermore, there are approximately 5000 suicides among working-age people in the UK each year, and a number of those involve workers driven to despair by work-related stress. In Japan, where work-related suicides are officially recognised and compensated, they estimate 5 per cent of suicides to be work-related, which, if applied to the UK, would be about 250. An analysis in Australia of suicide causes over the decade to 2000 would suggest a UK figure in excess of 100 work-related suicides a year.3

Accounting for work-related suicides and adding them to the running total gives a rounded-up estimate of 1500 to 1600 work-related deaths a year, which is six to seven times the HSE headline figure and more than the annual total of murders.4

Turning to deaths due to occupational illness, the HSE does not report a figure for such deaths but the latest health and safety statistics (for 2007/08) state that “every year, thousands of people die from work-related diseases”.5 These are itemised as: work-related cancer deaths in excess of 6000, of which about 4000 are due to asbestos; 111 deaths from asbestosis; 182 from pneumoconiosis; and around 4000 from Chronic Obstructive Pulmonary Disease (COPD). Adding these together gives an HSE estimate of deaths from work-related diseases of 10,293.

For many years, the HSE has claimed that a 1981 paper, ‘Causes of cancer’, by Richard Doll and Richard Peto,6 is the ‘best available estimate’ of work-related cancer. This report claims 4 per cent of all total cancer deaths can be attributed to work-related causes, and this is behind the figure of 6000 deaths a year in Great Britain. Prolonged campaigning by Hazards magazine, and by trades unions, based on research by some of the world’s leading epidemiology experts that a much higher proportion of cancers are work-related, has resulted in the HSE commissioning epidemiologist Dr Lesley Rushton to carry out a review of the burden of occupational cancer. Although not yet complete, her work has already revealed ‘4 per cent’ as a significant underestimate.7

Evidence suggests that the annual death rate could be more than twice that of even the larger of the HSE‘s figures. Dr Richard Clapp, the author of a 2005 review of the causes of occupational and environmental cancer, estimates that the probable range of occupational cancer deaths is 8-16 per cent.8 Applying the mid-range of 12 per cent to all cancer deaths in Great Britain therefore gives an estimate of 18,000 work-related cancer deaths a year.

A 2005 paper in the journal Occupational and Environmental Medicine suggests that 15-20 per cent of COPD deaths could be work-related,9 which equates to around 6000 deaths. Meanwhile, Hazards magazine estimates that up to 20 per cent of all heart-disease deaths have a work-related cause – for example, stress, long hours, shift work – which is about 20,000 a year.10

For all those diseases to which work can be a contributory cause, such as Parkinson’s, Alzheimer’s, Motor-Neurone Disease, rheumatoid arthritis, chemical neurotoxicity, auto-immune conditions, and restrictive lung diseases, a further conservative estimate of about 6000 deaths a year can be made. All of this adds up to an overall Hazards estimate of deaths from work-related illness of up to 50,000 a year, or more than four times the official HSE figure.

It could be argued that the occupational-disease deaths are based on the working conditions of up to 40 years ago, as cancers such as mesothelioma have up to 40-year latency periods, but many cancers and most other occupational illnesses have a much shorter latency. Our contention is that the HSE figures grossly underestimate the number of workers whose current working conditions expose them to both the well-known and the newer risk factors, which will produce the worker deaths of the future.

For example, for Great Britain, the European Union’s CAREX database of occupational exposure to carcinogens estimated that, in the early 1990s, about 5 million workers (22 per cent of the employed) were exposed to carcinogens.11 These days, we also have an ever-increasing number of workers subjected to long hours, bullying and harassment, and shift work. About 20 per cent of workers are in precarious work, which is known to cause stress, heart and circulatory diseases, while far too many workers are still routinely exposed to dusts and chemicals that cause respiratory illnesses and contribute to heart disease.

It is therefore essential that we use the best evidence-based picture of the real state of work and its effects on workers’ lives and health in order to target resources and harness political will to tackle all the causes of injury and ill health. The lessons currently being learnt in the financial sector about acknowledging the scale of the problem and the inadequacy of ‘light touch’ and ‘limited’ regulation need to be applied in all places where there is a likelihood of people becoming ill, injured, or worse.

4 Tombs, Prof S and Whyte, Dr D (2008): ‘A crisis of enforcement: the decriminalisation of death and injury at work’ – Centre for Criminal Justice Briefing, 6 June 2008

9 Meldrum, M and others: ‘The role of occupation in the development of chronic obstructive pulmonary disease (COPD)’, in Occupational and Environmental Medicine, Vol.62, pp212-214

11 Kauppinen, T and others (2000): ‘ Occupational exposure to carcinogens in the European Union’, in Occupational and Environmental Medicine, Vol.57, pp10-18