Wolverhampton and Bilston District Trades Union Council organised a public meeting on 17th March 2011 Against the Cuts; at the Dunstall Hill Community Centre. 2,200 homes in the surrounding areas were leafleted with details of the meeting.

it was organised in the build up to the historic March 26th demonstration in London. Most of the audience signed up for the coaches or for our email list.

Are the government’s cuts necessary?

In the weeks following the TUC demonstration for jobs, growth and justice on 26 March, campaigners in Wolverhampton will hold a series of public events to highlight the damage already caused by spending cuts and to reinforce the message that the Con-Dem government can be made to back down by the force of popular opposition.

The meeting, convened by Wolverhampton Trades Union Council, had been intended as a debate between local Tory MP Paul Uppal and former Labour MP Rob Marris. But Trades Council President Marie Taylor reported that Paul Uppal had declined the invitation to address his constituents and listen to their concerns. He declined the invitation to debate with his revered predecessor and his constituents. Despite having 30 councillors, the Conservative and Lib Dem coalition in Wolverhampton could not find a single spokesperson to attend to defend the government’s policy.

In his speech, Rob Marris described the government’s public sector cuts as ‘unfair, unsafe and unnecessary’. He exposed the myths peddled by the government, pointing out that deep cuts could not be made without affecting services, that private providers are not more efficient and that the cuts will not impact equally on everyone. Only those unfamiliar with the real world, he said, could believe that ‘frontline staff’ in a hospital could do their jobs effectively without the ‘backroom’ colleagues who work in the laboratory or maintain the patients’ records. The Private Finance Initiative had shown how costly and inflexible private providers could be and the government’s cuts would hit the poorest hardest and hurt women more than men.

Rather than cuts being necessary to avoid economic meltdown as the Con-Dems claim, Mr Marris said that the opposite was true. He advocated investment in manufacturing industry and a fairer system of taxation that is properly enforced.

“We need a debate on the cuts proposed by the Coalition Government” said Jas, a union member and charity worker. “The people of Wolverhampton deserve straight answers from those in power about these cuts.”  Jas went on to say “The people my charity helps will bear the brunt of these savage cuts in welfare, health and social care spending. They’ve done nothing to deserve it, yet they’ll take the rap for these ideologically driven policies which favour the rich. The people of Wolverhampton aren’t stupid, they can make their own minds up about this government, and I really hope loads of them come to the meeting to join the debate.”

Marie Taylor, the President of Wolverhampton, Bilston & District Trades Union Council said “Does this mean the Conservative and Lib Dems in Wolverhampton have finally realised they cannot openly support the government’s cuts programme? They need to explain themselves. We are disappointed that the local Con-Dem coalition has refused to listen to their community, many of whom will be made redundant as a result of their policies. “ 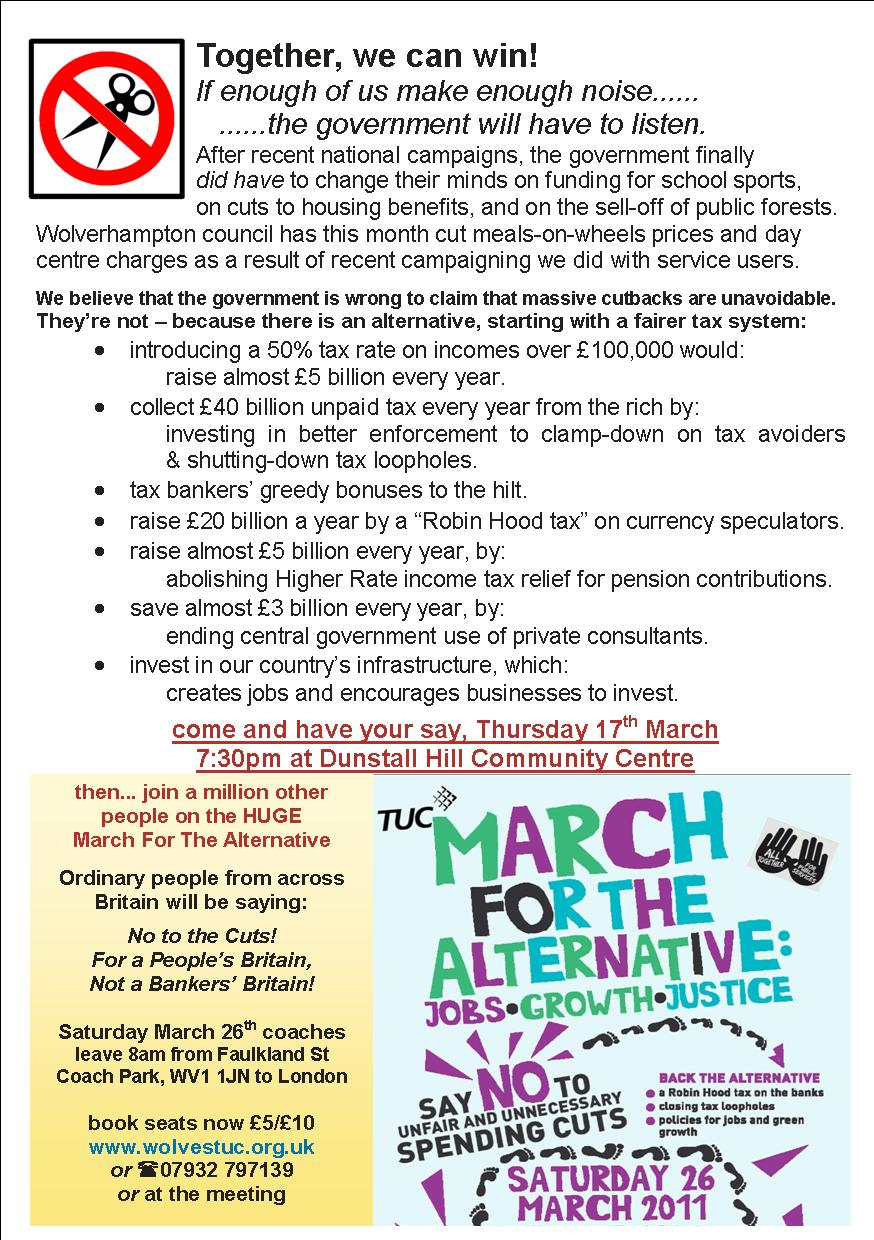 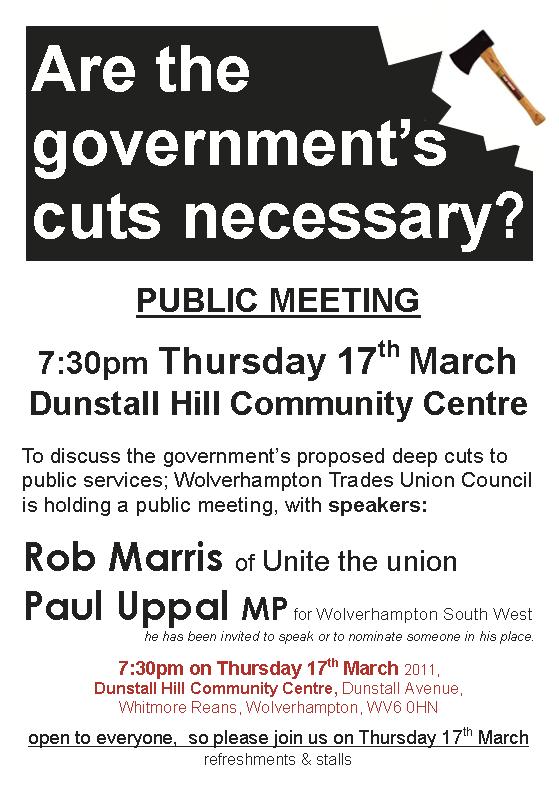