PCS members in the Universal Credit Service Centres in Wolverhampton and Walsall took two day strike 28/29 May 2019, in their campaign for more staff and improved working conditions. 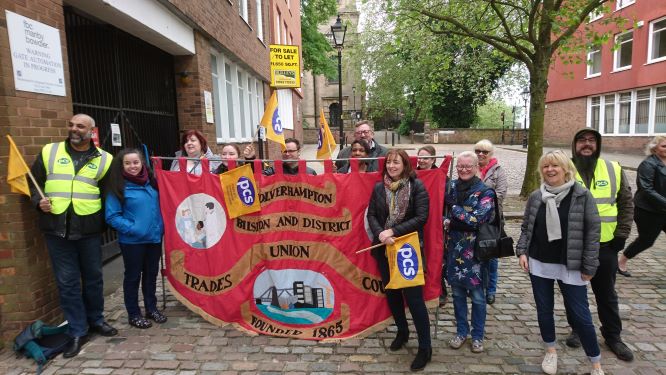 Members of the Public and Commercial Services union (PCS) based in Walsall and Wolverhampton will walk out on May 28 and 29, claiming they face “intolerable” workloads and insufficient staff recruitment.
The union said it had made repeated warnings that Universal Credit should be scrapped and replaced.
PCS general secretary Mark Serwotka said: “Instead of trying to solve this ongoing dispute over workloads and recruitment, ministers are spending thousands on a propaganda campaign to promote a failed Universal Credit system.  It is shameful that the minds of minsters are not focused on claimants or staff but instead on covering up for their own abject failures.  This strike will send a message that we as a union will not stand idly by while our members are treated with contempt and ministers run Universal Credit into the ground.”
Around 250 workers are involved in the dispute.

Both sites reported strong support for the dispute, with the vast majority of members taking strike action. There were two separate picket lines at each site and up to 40 pickets in total, about 20 at each, during the course of the morning. Many ordinary members joined the picket lines, and they were supported by Full Time Officers and Fran Heathcote the DWP Group President and acting National President. Members in Walsall were also joined by Gill Ogilvie, the Labour Party Prospective Parliamentary Candidate for Walsall North.

Other UC sites have held car park meetings and demands have been made for extra staffing across the whole network. Unless DWP takes action to increase staffing in UC, and reduce the pressure that our members are working under, it is likely that we will see more sites calling for strike action.

The beleaguered service has faced severe under investment, staff shortages and criticism from claimants on how they are treated.

PCS General Secretary Mark Serwotka said: “The message from our members is clear – changes need to be made otherwise they will walkout for two consecutive days. The union has tried to negotiate for months but to no avail. Ministers have stuck their heads in the sand and our members are now sending them a very loud wakeup call.

“PCS members have not taken the decision to strike lightly but the fact is industrial relations have broken down because ministers seem intent on running this service into the ground while treating staff with utter contempt.”

274 staff were balloted for strike action at Wolverhampton and Walsall service centres with over 90 pc voting ‘YES.”

The 5 key demands from Universal Credit workers are: