2014 event: Hundreds turn out for Chainmakers’ Festival despite downpour on Friday 6th June Friday night at the Chainmakers @ Leftfield Marquee in Bearmore Park 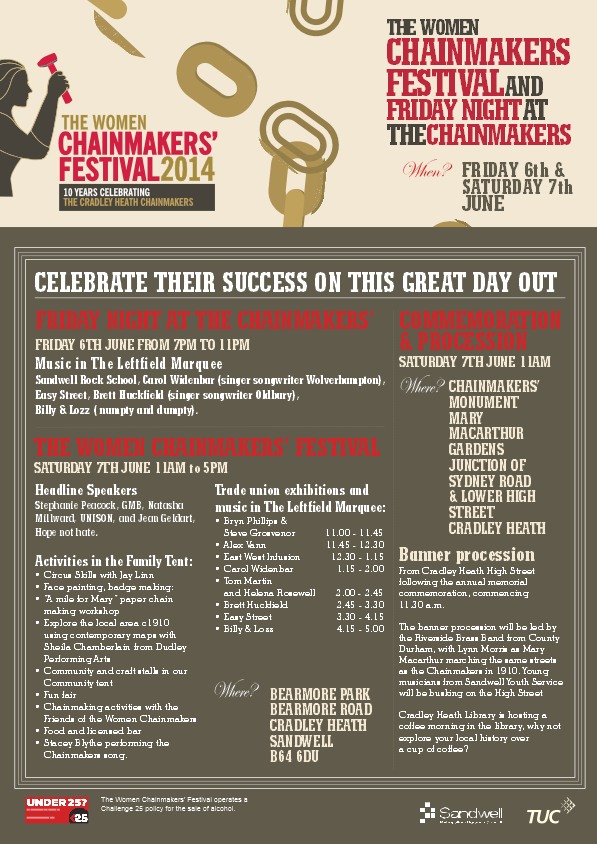 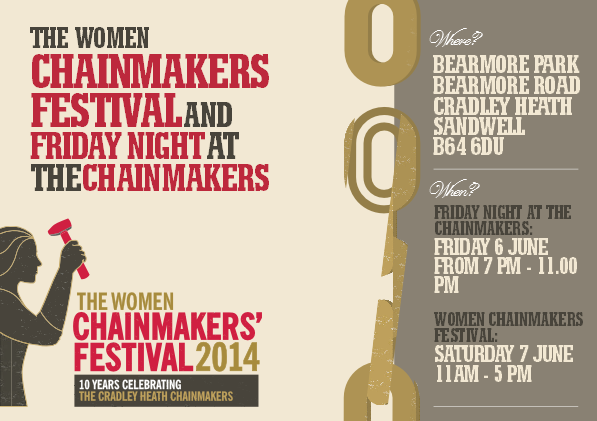 The Midlands TUC maintains this event as the largest celebration of womens‘ history in Britain. 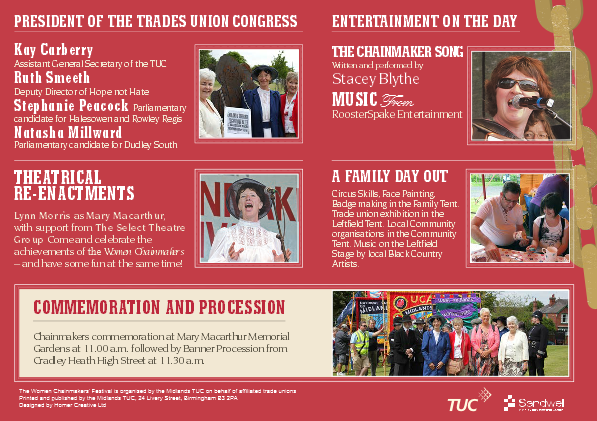 ‘The group is being set up to promote the story of the women chainmakers and to encourage more local people to become involved in activities and hopefully therefore to engage with the festival.’
Statement from their constitution:
To preserve and provide a focus for the industrial heritage of the Black Country and celebrate the role that women have played in that local history, traditions and culture. Written accounts, oral histories, records and memorabilia will be made visible for the benefit of the general public via festivals, meetings, seminars, workshops, exhibitions by any other means to achieve the objects.
The thinking behind this is that we need the Friends group to be a distinct group themselves separate from the festival / TUs for a number of reasons
–  to encourage community involvement / engagement
– to ensure year round engagement
– to promote the history of the chainmakers
– to enable access to new funding streams

at the Midlands TUC meeting in October the following motion from Wolverhampton & Bilston TUC was passed:

We congratulate Midlands TUC employees and those involved with the organisation of the 2013 Chainmakers’ Festival in Cradley Heath.
The increased turnout, particularly of local people , was testament to their good work and confirms the correct decision to bring the festival back to Cradely Heath, the home of chain making. To improve on this year’s efforts we suggest for 2014 for example:
(i) A local organising committee to assist the current work done. To involve local community groups, schools and Sandwell Council as well as trade unions and trade union councils.
(ii) Increased involvement with Sandwell Council in advance to utilise their publicity systems.
(iii) Co-ordination with national TUC to send out publicity along the lines of their Tolpuddle festival publicity for South West TUC, reminding affiliates and members that this is a flagship celebration of women’s magnificent contribution to trade union struggles. Publicity should be along the lines of the only women’s national festival.

The 2013 ninth FREE TUC Chainmakers’ festival in Bearmore Mound Playing Fields, Cradley Heath, B64 6DU had a much bigger turnout and was a very successful day. 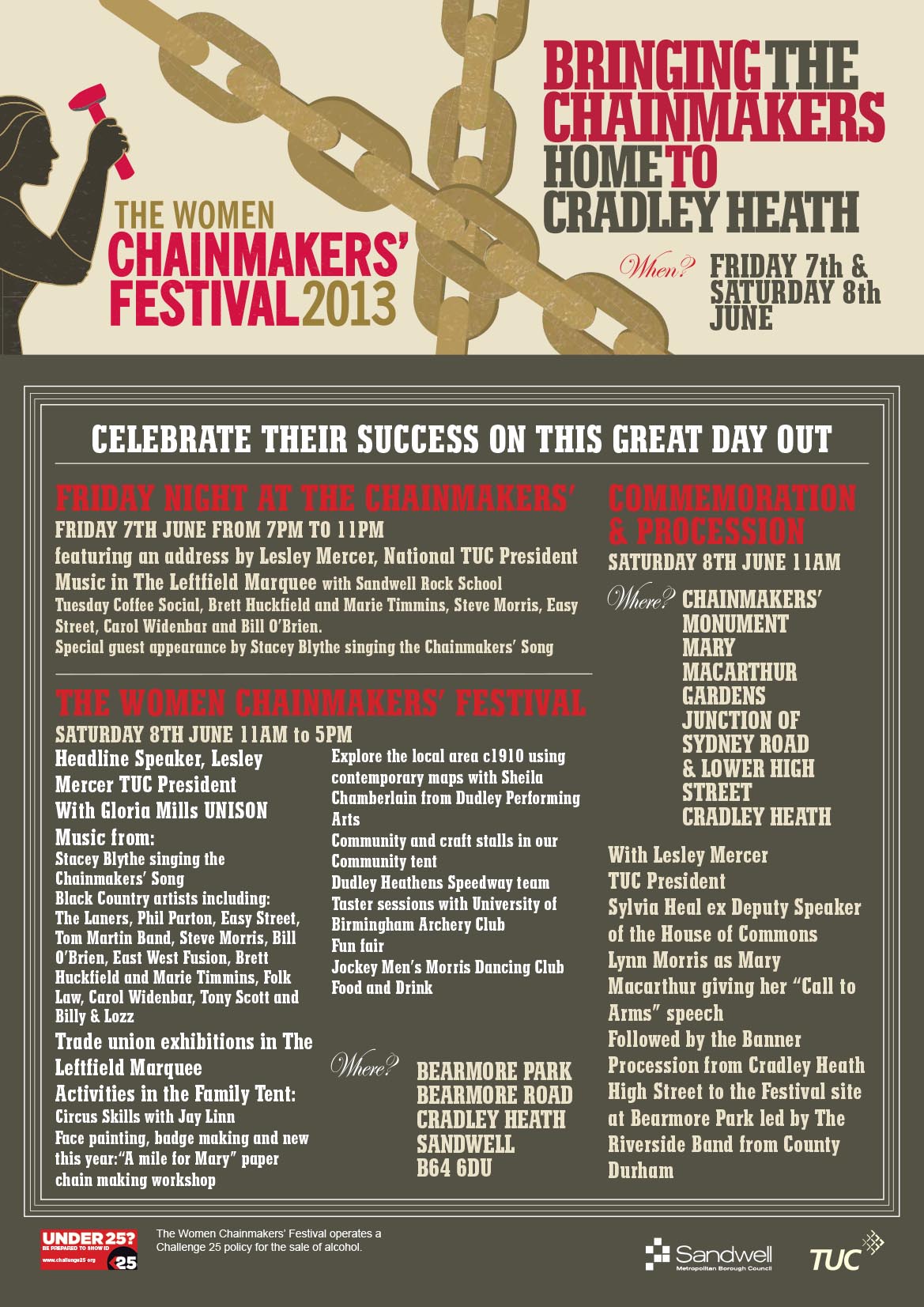 11am @ Chainmakers Monument, to right of Cradley Heath railway station in Mary Macarthur Gardens people gathered for a commemeration at Mary Macarthur’s statue, followed by banner procession up Cradley High Street led by local children, to Bearmore Park for the Chainmakers festival which then continued until 5pm.

display from Cradley Heathens Speedway Team and archery
Wolverhampton TUC had a stall in the Leftfield tent along with union and campaigning stalls and a craft tent with 15 stalls.
It is the same venue as last year, in the heart of the Cradley Heath community where the Chainmakers worked and lived – and fought their successful ten week dispute to secure a minimum wage for their sector. 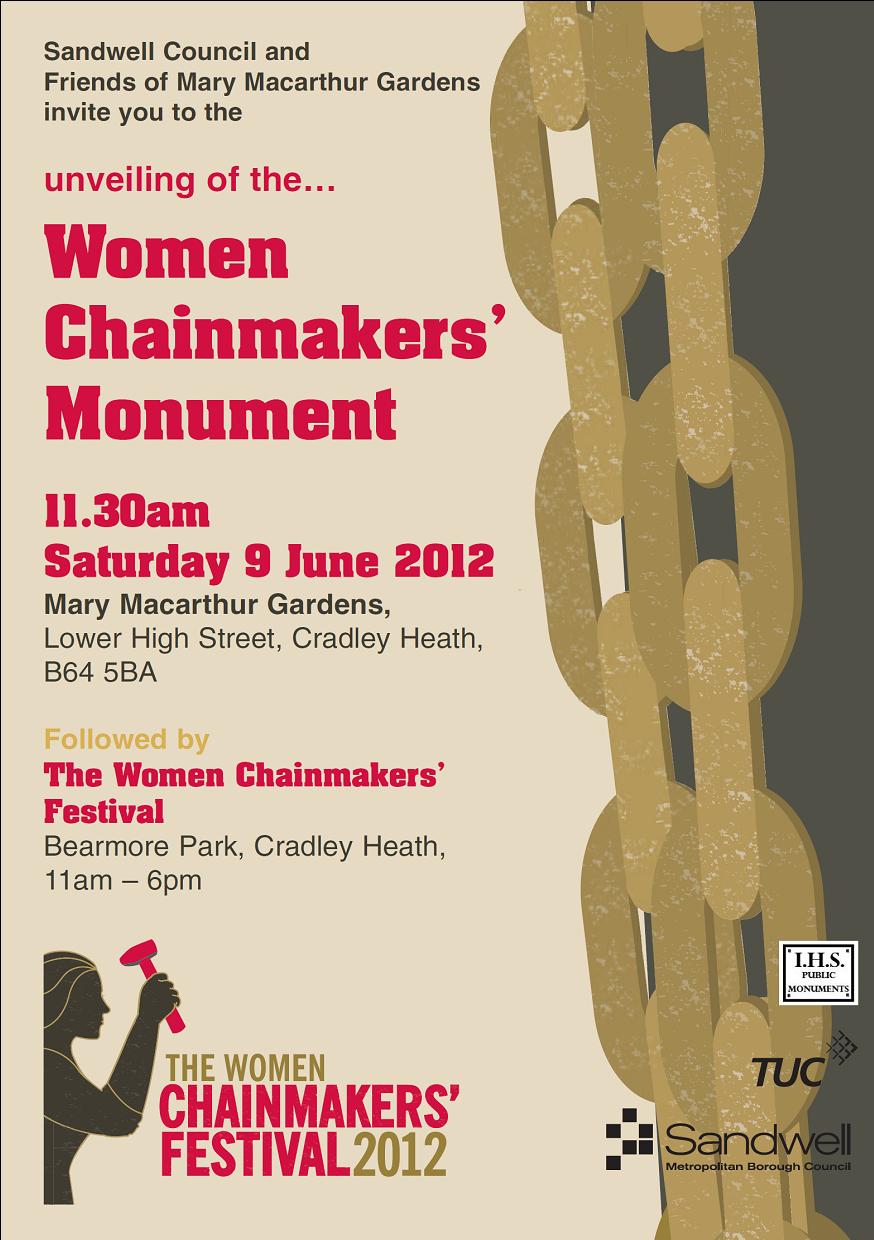 The event this year coincided with the unveiling of a Chainmaker statue in the nearby Mary Macarthur Memorial Gardens. The statue unveiling took place at 11.30am with a banner procession from the Memorial Park to the festival site following on the centenary of the opening of the Workers Institute.

Local sculpter Luke Perry‘s monument in Mary Macarthur Gardens (opposite Lidl) to the women chainmakers of Cradley Heath, their famous strike of 1910 and Mary Macarthur who roused them. 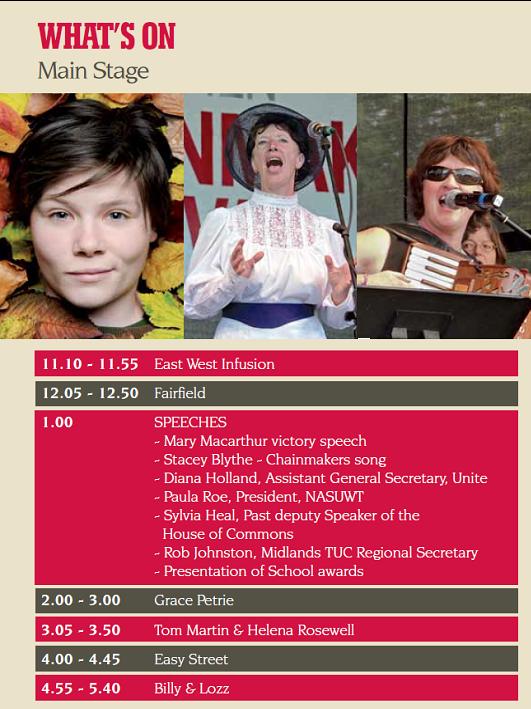 Midlands TUC Regional Secretary Rob Johnston said: “We are delighted to bring the Chainmakers back to Cradley Heath.

“This places our joint celebration of Mary Macarthur, who led the strike, back in the heart of the community where the women fought for their rights to a minimum wage.
“It was a great achievement and we are indebted to Sandwell Council for their support in helping us continue to celebrate this important event.
“We are looking to make this festival an integral part of Cradley Heath for the foreseeable future and look forward to a long and successful partnership with the council to make this happen.”
Sandwell Council Leader Councillor Darren Cooper said: “We are very pleased the TUC is again prepared to organise the festival in conjunction with the council.
“This is an event which celebrates our local history and marks one of the most important events to take place anywhere in the country – and it is here on our patch in Cradley Heath.”
The festival has been moved forward to June to coincide with the unveiling of a statue of a woman chainmaker at Mary Macarthur Park in Cradley Heath, organised by the council and the Friends of Mary Macarthur Gardens Group.
————————————————————————————— 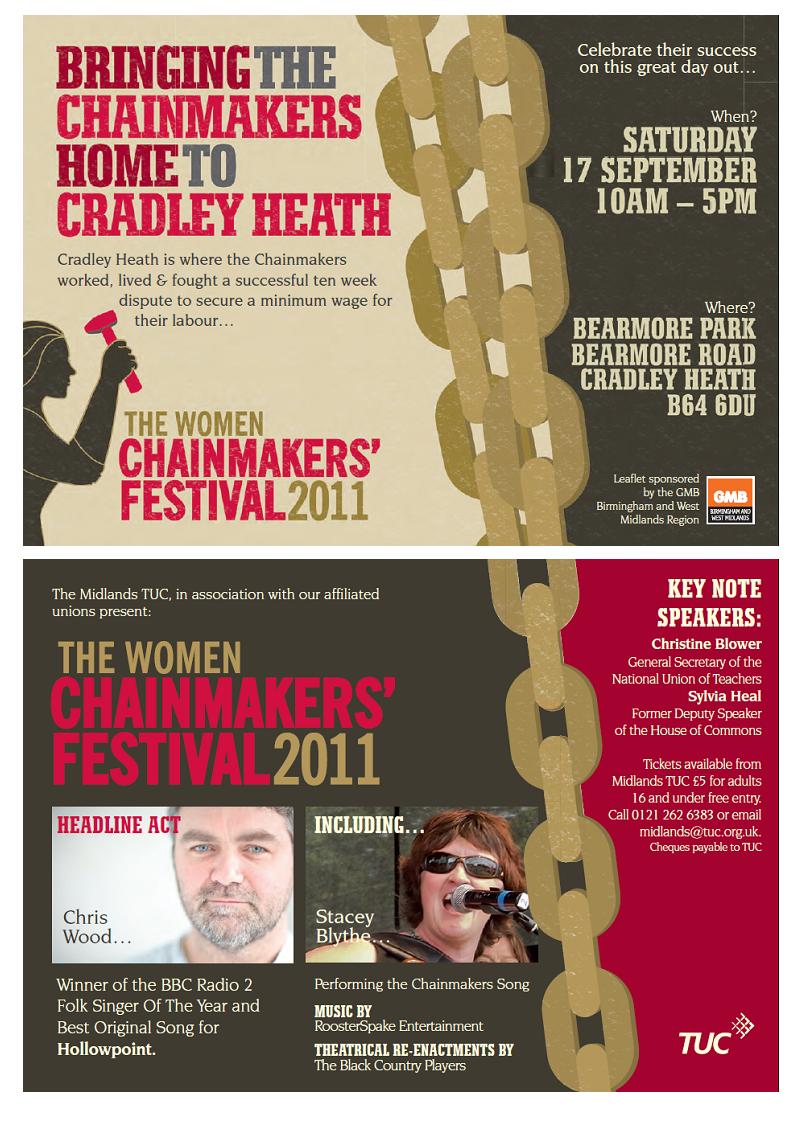 The Midlands TUC brought the Chainmakers‘ festival back to Cradley Heath – the heart of the chainmaking industry – to celebrate the landmark victory for better pay.  The 1910 chainmakers’ strike, led by trade unionist Mary Macarthur, won a battle to establish the right to a fair wage following a 10 week strike.
The TUC-organised event backed by Sandwell CouncilSeptember 17th2011at Bearmore Mound Playing Fields, Cradley Heath, B64 6DU.
The Midlands TUC aims to maintain this event as the largest celebration of womens‘ history in Britain.
The new venue, Bearmore Mound, in the heart of the Cradley Heath community where the Chainmakers worked and lived – and fought their successful ten week dispute to secure a minimum wage for their sector.
Regular participants, such as the Black Country Players, were back this year.

Festival organiser Alan Weaver said, “Bringing the Chainmakers’ festival back to the heart of the community where the women fought for their rights is a great achievement and we are indebted to Sandwell Council for their support in helping us do so. We are looking to make this festival an integral part of Cradley Heath for the foreseeable future and look forward to a long and successful partnership with the council to make this happen.”

Sandwell Council Leader Councillor Darren Cooper said: “Mary Macarthur is one of the giants of Sandwell’s past.  Her role as leader of the Cradley Heath chainmakers‘ strike last century has rightly earned her a place in the history of the borough and trade unionism.
The TUC has asked us to help with this year’s celebrations of her life and we are delighted to be able to bring them back home to Cradley Heath by making Bearmore Mound available. We very much hope this year’s festival will continue the success of the past few years.”

The festival celebrates the achievements of 800 or so women Chainmakers who fought to establish a minimum wage for their labour. The local employers sought to deny them their rights but were met with forceful opposition, led by Mary Macarthur, who founded the National Federation of Women Workers and later Parliament as a Labour candidate.

Last  year’s event, which marked the centenary of the strike and attracted 4,000 trade unionists from across the country.
The festival celebrating the achievement of the women had been held for the last six years at the Black Country Living museum, home to the Mary Macarthur Institute, following its move from Cradley Heath.  The Museum informed the Midlands TUC that they are no longer prepared to allow the festival to be staged, after taking trade uniion money for the last 6 years.  The museum’s view was quoted as having pronounced the festival as ‘too political‘!. The festival celebrated the centenary of the women’s strike which won a minimum wage has been held jointly with the Midlands TUC since 2005. The festival won the prestigious Black Country Tourism Award for Best Festival in 2007.  The museum complained about trade unionists last year raising the issues of “demonstrations about cuts in public spending and the privatisation of the post office.”
sponsoring unions: UNISON, Unite, GMB, CWU, USDAW, PCS, NASUWT, NUT, FBU, POA
The women chainmakers dispute was a victorious local political campaign for a minimum wage.
The Museum has THEIR Workers’ Institute, rebuilt in the museum, partly funded with trade union money.
Unions have brought thousands of local people into the museum, at each event, many for the first of many times, and spent much funding the events.
“too political?”   What is history if it is not political?  “History is past politics; and politics present history” John Seeley English historian 1834-95 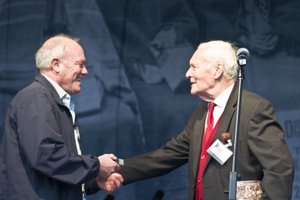 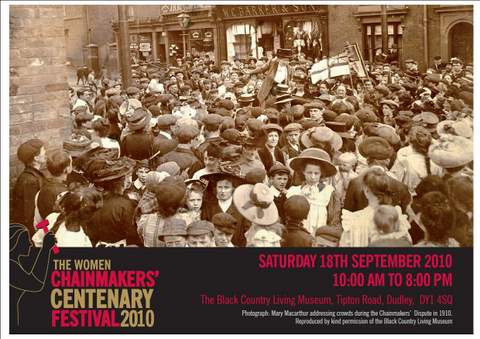 The Museum’s major labour history event recalls the fight of the Cradley Heath Women Chainmakers, who in 1910 went on strike for ten weeks and were successful in winning the first ever minimum wage. The TUC organised event, hosted by the Black Country Living Museum, will celebrate the importance of Trade Union History and women at work.

The Chainmakers‘ strike ended on 22nd October 1910. There was a day of celebration for the anniversary on 23rd October.

Headline Act: Robb and the Irregulars

Midlands TUC Regional Secretary Roger McKenzie said, ‘Last year’s festival proved to be a fantastic day out for trade unionists from all over the country. This year we aim to provide an even better day of entertainment as a fitting celebration of the historic achievements of the Cradley Heath Women Chainmakers who suffered a ten-week lockout in their struggle for a minimum wage.

Museum Director Ian Walden said, ‘This festival is one of the highlights of the Museum’s year, and gives us the opportunity to celebrate one of the most significant events in the history of the Black Country. Our newest building on site, The Workers Institute, was built from the surplus in the Women Chainmakers strike fund and gives a new focus for our interpretation of Black Country history and culture’

Click HERE to view 3 short films of the festival and Black Country museum taken by one of our supporters at 2009 festival.

The 2008 festival started at 10am and ran throughout the day with speeches commencing at 1pm, followed by the now traditional procession of trade union banners around the Museum site.  Speakers were: Mary Davis, TUC & Margaret Prosser, Deputy Chair of the Equalities and Human Rights Commission.  Chumbawamba, who recently celebrated twenty-five years of playing radical, political folk music, headlined.

WolverhamptonTUC again joined the procession with our much photographed banner. We distributed hundreds of postcards urging onlookers to join a trade union themselves.

Mr McKenzie continued, ‘This is the premier trade union festival in the Midlands and we are proud to hold it in conjunction with our friends at the Black Country Living Museum.’

The festival is supported and funded by the TUC, the Midlands Trade Union movement, and legal firms involved with local trade unions.