April 2014 Express and Star poll revealed over 80% of Wolverhampton people believe that the Bedroom Tax should be scrapped now.

full refund of Bedroom Tax loophole – Who is affected?

Social housing tenants affected by the bedroom tax who have been living at the same address and entitled to claim housing benefit continuously since 1996.

Bedroom Tax loophole – Who is affected?

Social housing tenants affected by the bedroom tax who have been living at the same address and entitled to claim housing benefit continuously since 1 January 1996.

Are there any exceptions?

Tenants who were not entitled to claim housing benefit for a period of less than four weeks (or 52 weeks if the claimant is a welfare to work beneficiary) but otherwise claimed continuously will also qualify as exempt.

Tenants who were unable to live in their property during that period because of damage caused by fires, flooding, explosions or a natural catastrophe will also be exempted.

How many tenants affected by the bedroom tax are eligible?

Early council estimates range from 4% to 15% of the 660,000 tenants already affected by the bedroom tax.

What are they entitled to?

A refund of housing benefit reductions caused by the bedroom tax since it was implemented in April 2013, and an exemption from future reductions.

How much can they expect to receive?

The bedroom tax has cost affected tenants £16 a week on average and has run for 40 weeks. Affected claimants eligible for a refund would be credited around £640 if it were awarded today.

Are tenants who qualify for this exempted from the bedroom tax permanently?

This is unlikely. While tenants are entitled to have their previous bedroom tax reductions refunded and are exempt from future reductions for now, guidance issued by the DWP to councils on 8 January 2014 said the department will be taking steps to close the loophole shortly.

What if tenants have already qualified for council crisis payments to cover the shortfall?

Residents who have already been awarded money from a council’s discretionary housing payment fund to cover their bedroom tax reductions will still be eligible for a full refund. Residents are also under no obligation to return these crisis fund payments.

I’m a tenant who meets the criteria. What do I do now?

You can wait for your council’s housing benefit department to contact you or you can appeal directly to it.

Housing blogger Joe Halewood has produced this template letter you can fill in and send to your landlord here:

I would be grateful if you could reassess my entitlement to Housing Benefit from 4th April 2013 to remove the reduction in their entitlement due to their award being assessed under the social sector size criteria.

I believe that you have not used the correct Housing Benefit Regulations when assessing my eligible rent and that as this is an official error there is no time limit for you to revise your decision, and that anyone can point out this error to you.

I believe that because I have been on Housing Benefit continuously since 1st January 1996 (with certain gaps allowed) my eligible rent should be assessed in accordance with paragraph 4 of Schedule 3 to the Consequential Provisions Regulations 1996. This is because Housing Benefit Regulation 2 defines ‘eligible rent’ as follows:

I believe that, because I as the tenant meet the conditions, the correct Regulation to be applied when assessing their eligible rent is paragraph (b) ie regulations 12 (rent) and 13 (restrictions on unreasonable payments) as set out in paragraph 5 of Schedule 3 to the Consequential Provisions Regulations in a case to which paragraph 4 of that Schedule applies.

I believe that I as this tenant am entitled to this protection and am therefore excluded from the social sector size criteria.

Wolverhampton is the worst area in the Midlands

According to a Freedom of Information Request:

Number of Wolverhampton tenants pushed into arrears since 1 April 2013   1,153

Join up to the new Wolverhampton Against the Bedroom Tax Facebook campaign.

– More information about False Economy is available at www.falseeconomy.org.uk

– The TUC’s campaign plan can be downloaded from www.tuc.org.uk/campaignplan

Wolverhampton Bedroom Tax protest – up to 150 turned up or joined in on Saturday 30th March 2013 in a great first turnout. A dozen people spoke from the crowd, many for the first time showing the feeling of people against the government’s attack on the poorest in society. For the second time in a fortnight, protests took part in more than 50 British towns

The protest  got good coverage(Mon Ex&Star), front page and 2 pages inside with several pictures http://www.expressandstar.com/news/2013/04/01/backlash-begins-over-bedroom-tax-as-mps-stand-firm/?utm_source=twitterfeed&utm_medium=twitter 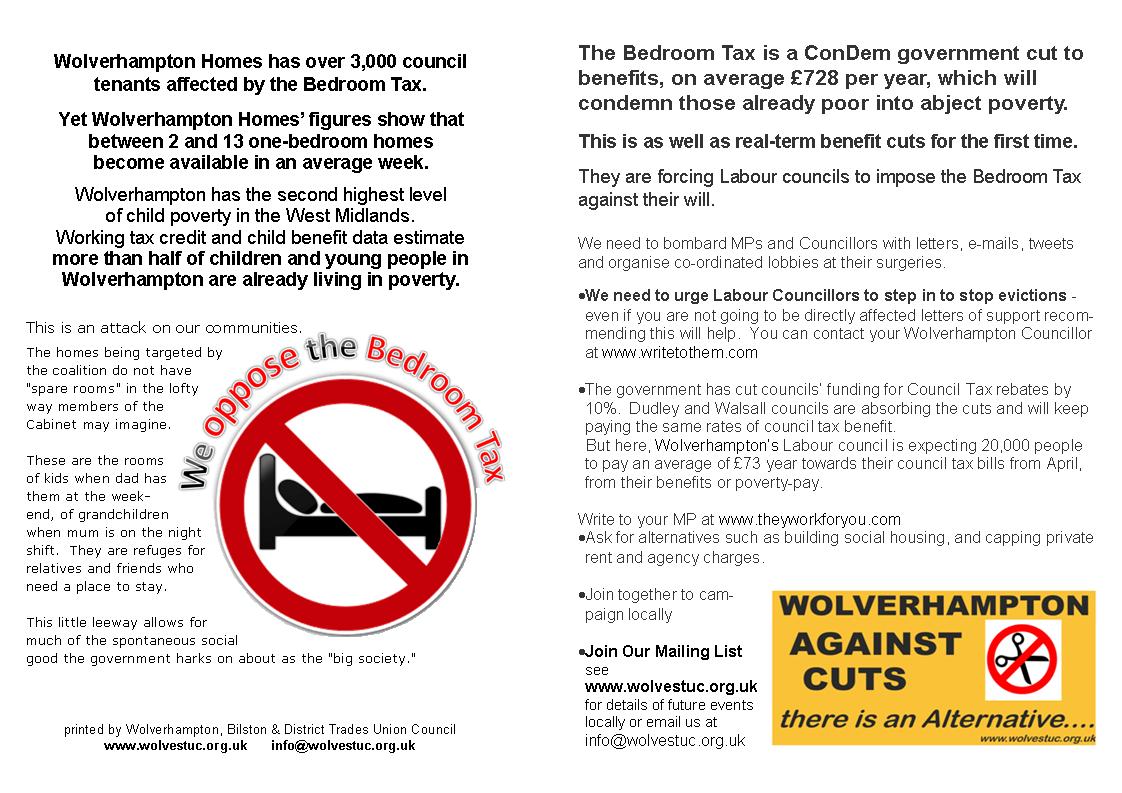 Council Leader Cllr Roger Lawrence has made the following comments to us:

The Government has replaced the national scheme of council tax benefit with locally-administered schemes which will receive a 10% cut in Government grant, in practice the council estimates that it is a cut of around 12% of current council tax benefit expenditure in Wolverhampton.   To recover the full amount, as pensioners (which are 42% of benefit claimants) are protected from paying any charge, we would need to charge at least 20% of those of working age.

The cut has presented the council with an unpalatable dilemma.  Given the overall projected budget shortfall over the next five years of nearly £70 million, we simply cannot afford the £3.2 million cost of making up the cut in Government support for council tax benefit by continuing the old scheme.

In these impossible circumstances the scheme we have proposed feels as fair as possible and the majority of Wolverhampton residents who responded to a public consultation (57%), which included sending a questionnaire to every household in the city, supported this approach.

It is the Government that has forced this Council into a position where it has no choice but to levy a charge from everyone including the most vulnerable in our community.  If we did not take this course of action the cuts would need to be made by taking money from front line services.

It is also worth noting that the Council has established a free and confidential advice helpline for anyone affected by national reforms to the welfare system.

The helpline number is 01902 572006 and it is staffed by officers from the CAB and the city council’s Welfare Rights team.

Bedroom Tax – those in receipt of Housing Benefit being subjected to benefit cuts April 2013:

The proposal will affect an estimated 660,000 working-age social tenants

– 31% of existing working-age housing benefit claimants in the social sector.

The majority of these people have only one extra bedroom

How much will people lose?  – Even the ConDems say those affected will lose an average of £14 a week from the very basic benefit currently deemed the minimum needed to live off.

All claimants who are deemed to have at least one spare bedroom will be affected.

Additionally, Wolverhampton council is making people pay 8.5% of Council Tax out of their benefits. 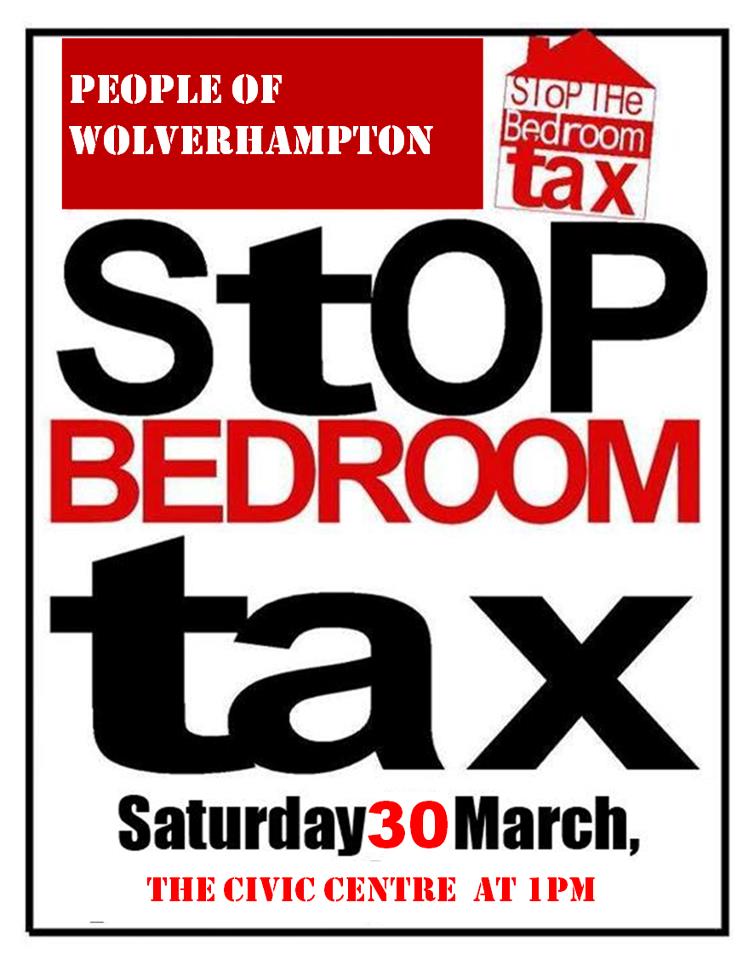 What the tax is and who is affected: http://www.housing.org.uk/policy/welfare_reform/‘under-occupation’_penalty.aspx

Rallies in over 50 cities took place on March 16th 2013 including Birmingham http://100milesfromthesea.wordpress.com/2013/03/18/birmingham-bedroomtax-organise-lobby-demonstrate-resist/

Birmingham against the cuts: http://birminghamagainstthecuts.wordpress.com/2013/03/12/more-concessions-show-we-can-defeat-the-bedroom-tax/ 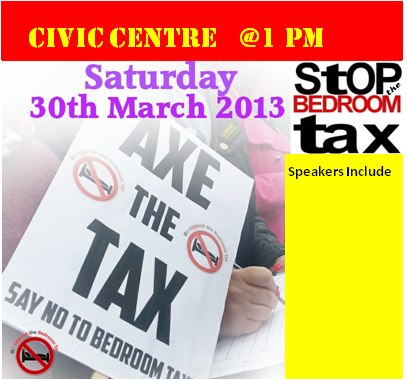 Councillor Leader Roger Lawrence, Labour leader of Wolverhampton City Council, said: “There are all sorts of problems with this.

“If parents have only one child and move house to downsize then that child may have to move schools, which disrupts their education.

“Under-occupancy is an issue that needs to be addressed but it needs to be done properly and to take account of people’s circumstances.This has not been properly thought out. Some civil servant in Whitehall has sat down and thought this is a good idea and hasn’t thought about the consequences.”

Figures supplied by Wolverhampton Homes show that between two and 13 one-bedroom homes become available in an average week.

Wolverhampton Homes has 3,000-plus council tenants affected by the housing benefit changes.

1) Organising: The subject of our next meeting in Wolverhampton on March 21st is the Bedroom tax – all welcome. Tell people you know it is happening and encourage them to come along.

2) Lobbying: We need to bombard MPs and Councillors with letters, e-mails and tweets, and organise co-ordinated lobbies at surgeries.

3) Join the National Demonstrations on March 30th which will be taking place in London and Glasgow.

4) Resisting: For resistance to be effective, it needs to be co-ordinated and it needs lots of support. Hopefully one outcome from the public meeting will be a beginning of a network to physically stand with those being affected by the tax from eviction/bailifs, spreading information, and helping people access information and support. Along with physical resistance, another way to combat the tax is in blocking the system with challenges and appeals.

It appears that Birmingham residents are not intending to comply with the planned rehousing program, and this site here gives lots of information about how to go about doing this in terms of using the official systems.

Lots of people involved in the campaign so far are grassroots activists with links to other anti-austerity movements; but for the movement to be effective it needs to fully engage and involve first time activists, and there needs to be lots of work on keeping the momentum, and making campaigning inclusive and accessible for all. When we fight together, we win.

How will the bedroom tax operate under Universal Credit?

There are some differences between how the bedroom tax will operate under housing benefit (from April 2013) and under Universal Credit when it is introduced.

From April 2013 lodgers will count as occupying a room under the size criteria rules. Any income from a lodger will be taken into account and deducted pound for pound from benefit apart from the first £20.

Taking in a lodger will also have an impact on many home contents insurance policies, potentially invalidating a policy or raising the premiums.

The proposal will affect an estimated 660,000 working-age social tenants (plus their families) – 31% of existing working-age housing benefit claimants in the social sector. The majority of these people have only one extra bedroom.

The Government’s view is that it is for landlords to specify the size of the property and this ought to match what is on any tenancy agreement and reflect the level of rent charged. The bedroom tax will not take account of whether a room is a single or a double bedroom. A room either is a bedroom or is not a bedroom.

Knowlsey Housing Trust has reclassified over 500 homes so that tenants are not affected financially. The National Housing Federation thinks that only about 1 in 10 landlords are likely to follow suit.

Households where there is a room kept for a student studying away from home will not be deemed to be under-occupying if the student is away for less than 52 weeks (under housing benefit) or 6 months (under Universal Credit).