Victory for UNISON’s 280 members who had been in dispute with Birmingham City Council , taking strike actoion over 17 months. They will keep their original jobs!

Why is this dispute so important?

We have to win this dispute – if we let a rogue Labour Cabinet act without Labour values, then we will have other councils tempted to act in this way. Rogue Labour councils are not just bad for council workers, they are bad for the working class communities, that we as a wider labour movement seek to serve.

If a workforce of predominately low paid women is allowed to be starved back to work after a year in dispute then it will damage the whole of the union movement as members of all unions will start to lose confidence. If however, we can show that the union movement will always come together, then we give all of our members confidence for future battles.
I hope to see you on Saturday.

UNISON have now had several days of strike action over the past eight months and more dates are planned.

strike rallies have been held in September 2018 latest news https://www.unison.org.uk/news/2018/09/birmingham-city-council-cutting-care-workers-hours-expense-local-people/ 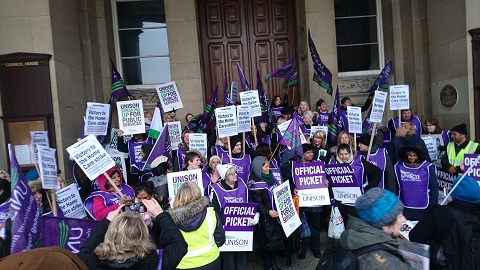 The mood among UNISON Home Care Workers, who took strike action on Saturday 20th Jan and Tuesday 6th February 2018, their Birmingham UNISON stewards, and officers, was confident that the council leadership would withdraw their proposals to impose unacceptable changes to their terms and conditions; changes that would directly affect their family and home life commitments and create even more financial hardship for many.

Birmingham Home Care workers are still in dispute with the City Council over plans to make all the in-house enablement jobs part-time, with the 286 Home Care workers being told that they would now only be working 22 hours a week. With 60% of the mainly women home care workers currently working 30 hours a week, they will either lose hours and pay, have to move to another job or take redundancy.

Birmingham UNISON Senior Steward and enablement home care worker, Mandy Buckley, said “These latest proposals by the council are completely unacceptable. Most of the staff have been with the Service for many years, caring for the most vulnerable people in our city.”

Mandy Buckley emphasised “We don’t earn high wages but we love the job we do. We are fighting for the very future of our Service and we know the public support us as it’s their Service being cut.” 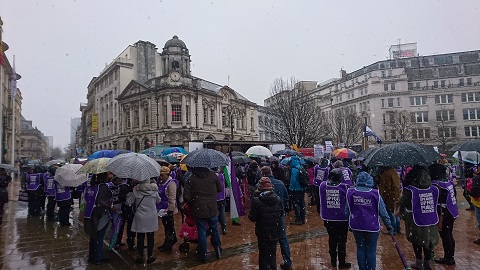 Birmingham UNISON: Home Care strike rally report As there were no workplaces to picket Birmingham Unison held a strike rally in Victoria Square in the city centre. Banner Theatre  played at the rally and there were speakers and a march in the snow.  Estimates of 350 people turned up in awful cold sleeting weather to show support and solidarity with Home Care workers who went on strike on Saturday 20th January. Speeches were made by Birmingham …Read this article…

Birmingham UNISON: Home carers strike background.  How we got to this situation: Councils have been forced to impose steep cuts on adult social care because the money they receive from Central Government has fallen substantially. Unlike other… Read this article…

Dispute about proposed working rotas and 150 redundancies threatened from 350 Home Care workers has led to a 99% vote for strike action with a 54% turnout.

Birmingham branch’s Secretary Caroline Johnson said “This would force many carers to work three split shifts in a working day. With too little time to return home between shifts, it is claimed they could be out from home for 15 hours a day. Our Home carers are dedicated to their jobs and the vulnerable clients they work with. They work on 365 days a year, in all weathers and from early morning to late at night. It is this dedication that a cynical management seeks to exploit.”

Care worker Lisa, said that due to the public sector pay cap and the loss of weekend overtime she has had to take a second job just to pay the mortgage.

“The changes mean I will have to give up one of the jobs and face the stress of facing losing my home. We haven’t had a proper pay rise since 2010. I can’t afford to strike, but I can’t afford not to. It’s not just about me, but the service we provide is being destroyed. We all grow old and want a good Homecare service to be there if we need it.”

Solidarity message that was sent from WB&DTUC:

We are all workers, all human beings, all have friends and families. We have a right to a life as workers not to be servants of the rich and powerful to be at their beck and call.
The collapse of Carillon this week is a further demonstration of the failure of privatisation and outsourcing policies pursued by successive governments.
We all hope the victory that your strike action will achieve in saving your jobs and protecting  your working life balance will also be another nail in the coffin of privatisation.
Keep public services public
People before profit “ 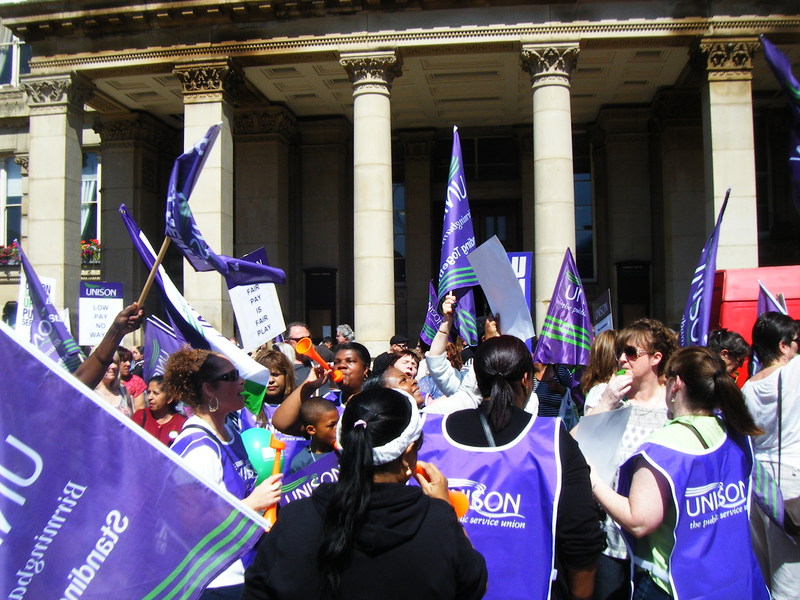