He had battled cancer and still in his 40s leaves a wife and step-daughter. Our deepest sympathy and condolences to them and to his father, our Treasurer, John Grant and his wife Chris.

Stuart dedicated his working life to the trade union movement and to the betterment of fellow workers’ lives and to the improvement of education locally for all our children. It is a very sad loss of such a capable comrade.

The Fight for Women’s Equality is at Wolverhampton Art Gallery, Lichfield Street, until 4 July. The gallery is open Monday to Saturday from 10.30am–4.30pm and Sunday from 11am–4pm. Admission is free. For more details, please visit www.wolverhamptonart.org.uk.

The annual Midlands TUC Chainmakers Festival, is held in Cradley Heath High Street on Saturday 7th July is the largest celebration in Britain of women’s political history. Come and have a sit down with us on our stall. 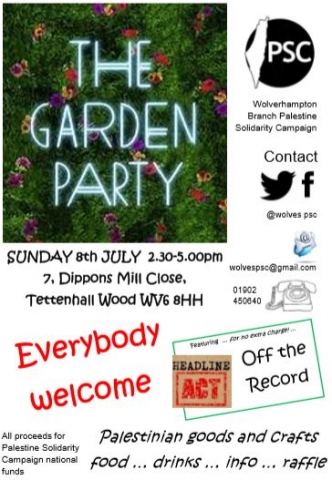 Firefighters in the West Midlands have voted by a margin of 9 to 1 for strike action in a dispute over the imposition of contracts on new entrants into the service.

The results of the ballot released 29 May show a 90% vote for strike action on an 82% turnout. The Fire Brigades Union (FBU) says West Midlands Fire Authority should urgently listen to its firefighters and withdraw the contracts immediately.