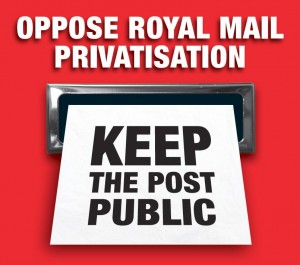 Some 78.29% voted in favour of strike action on a turnout of 62.74%. This is a huge rejection of the Tory-led governments ‘get even richer quicker’ scheme that will destroy the postal service.

The vote for strike action on the 4th Nov will start two days of protest: on Nov. 5th activists from 75 People’s Assemblies around the country will be taking part in a day of direct action and civil disobedience.

At our founding conference the People’s Assembly called for demonstrations. strikes and direct action against austerity. Following the enormous march in Manchester for the NHS last month, with the CWU strike now joining action by the NUT, FBU, UCU and others, and with the Nov 5th day of action across the country the movement is building into a force that can beat austerity.

So join the posties on the picket line on Nov. 4th and join the action yourself on Nov 5th!

Find an action near you:
http://thepeoplesassembly.org.uk/5nov/

The issue of Royal Mail privatisation is now entering a critical stage, and Wolverhampton, Bilston & District Trades Unionn Council is calling on all to support the campaign to ‘Save Our Royal Mail’.

With the planned privatisation of the Royal Mail remaining deeply unpopular with the public and with further growing political opposition, we hope that you can support the campaign by:

· visiting the ‘Save Our Royal Mail’ website at: http://saveourroyalmail.org
There you will be able to sign a petition, register your support and send a pre-prepared letter to your MP.
(It doesn’t matter what party your MP is from, or your constituency, we want to target all MPs across the political spectrum.)

Postal workers have been fighting the sell off of Royal Mail for a number of years, and as before and with your support, we can help them defeat this latest privatisation plan.

Save Our Royal Mail

JUNE 2013 – The Communication Workers Union announced the results of a national consultative ballot of 112,000 postal workers asking the following questions:

(Ballot papers were collected, counted and verified by the independent scrutineer Popularis).