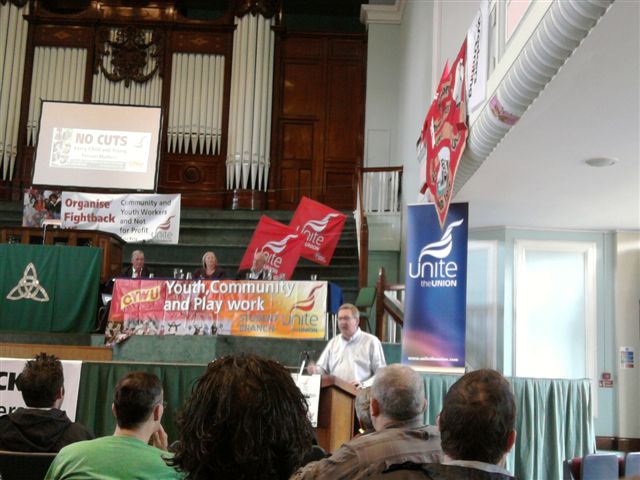 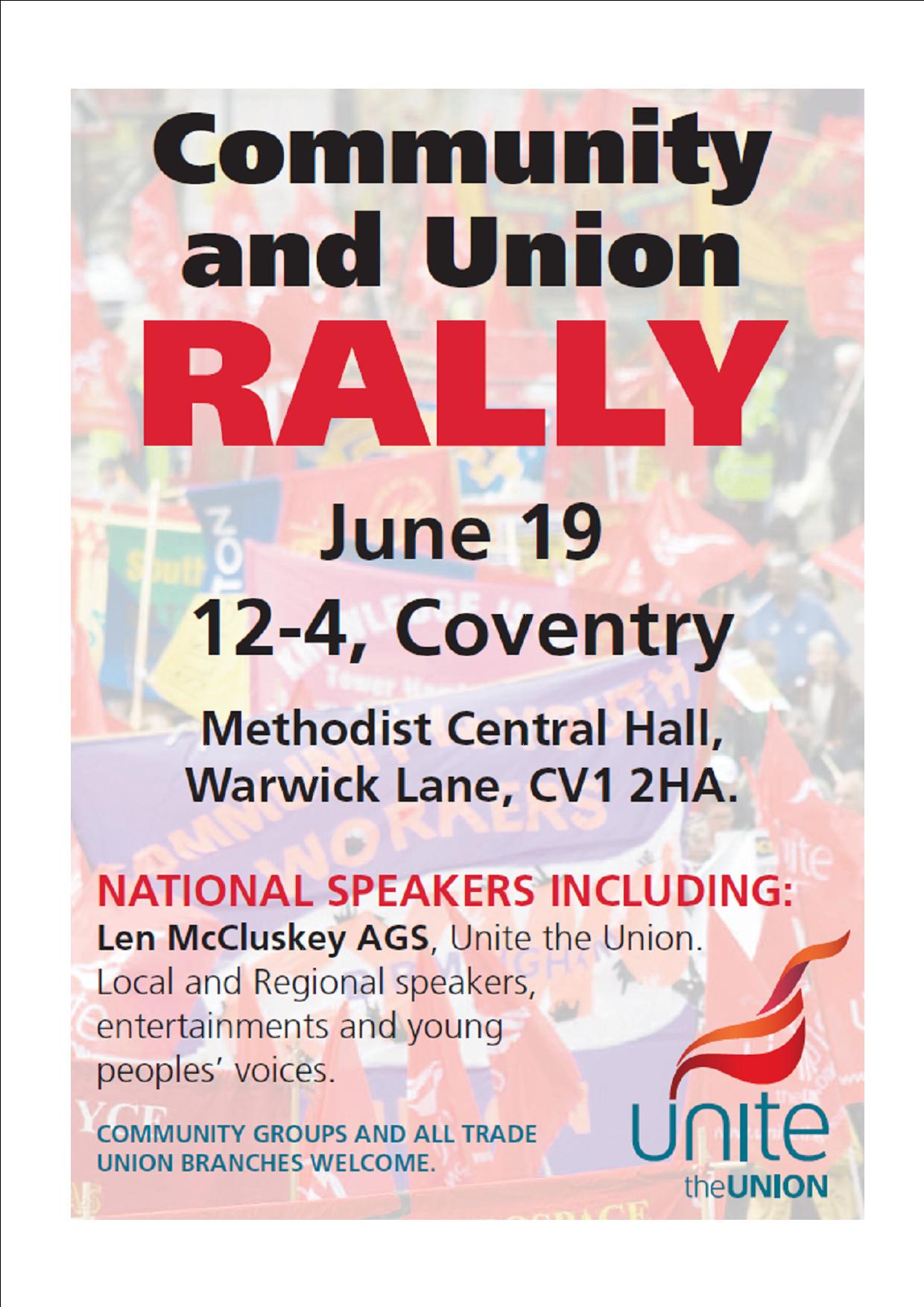 For all our futures

80 part time youth workers in Coventry have been involved in an industrial
dispute including strike action since November 2009. They are fighting to
keep their professional contracts and terms and conditions and stop cuts and
privatisation of young people’s services.
The attack on them was started by a Tory Council and a private consultancy that got paid well for proposing cuts of up to £10,000 a year for part time workers and over £120,000 in essential services to young people. Councils throughout the country are doing the same. They must be stopped.
This is the longest dispute in youth work’s history.
It is one dispute, but symbolises a lot.
We have seen the effects on our communities of manufacturing decline and unemployment.
We have felt the bad effects of privatisation and worse terms and conditions. What if we now accept big cuts to our public services?
This is the thin end of a very big wedge in Coventry and elsewhere.
What future will there be for our young people if we have no manufacturing, no
public services and no welfare and education support for people?
Coventry and the Midlands were proud manufacturing centres of excellence and
full employment. Our young people were valued and we built youth services with
them. What if this is all pulled apart?
Join our rally and say yes to an alternative future. 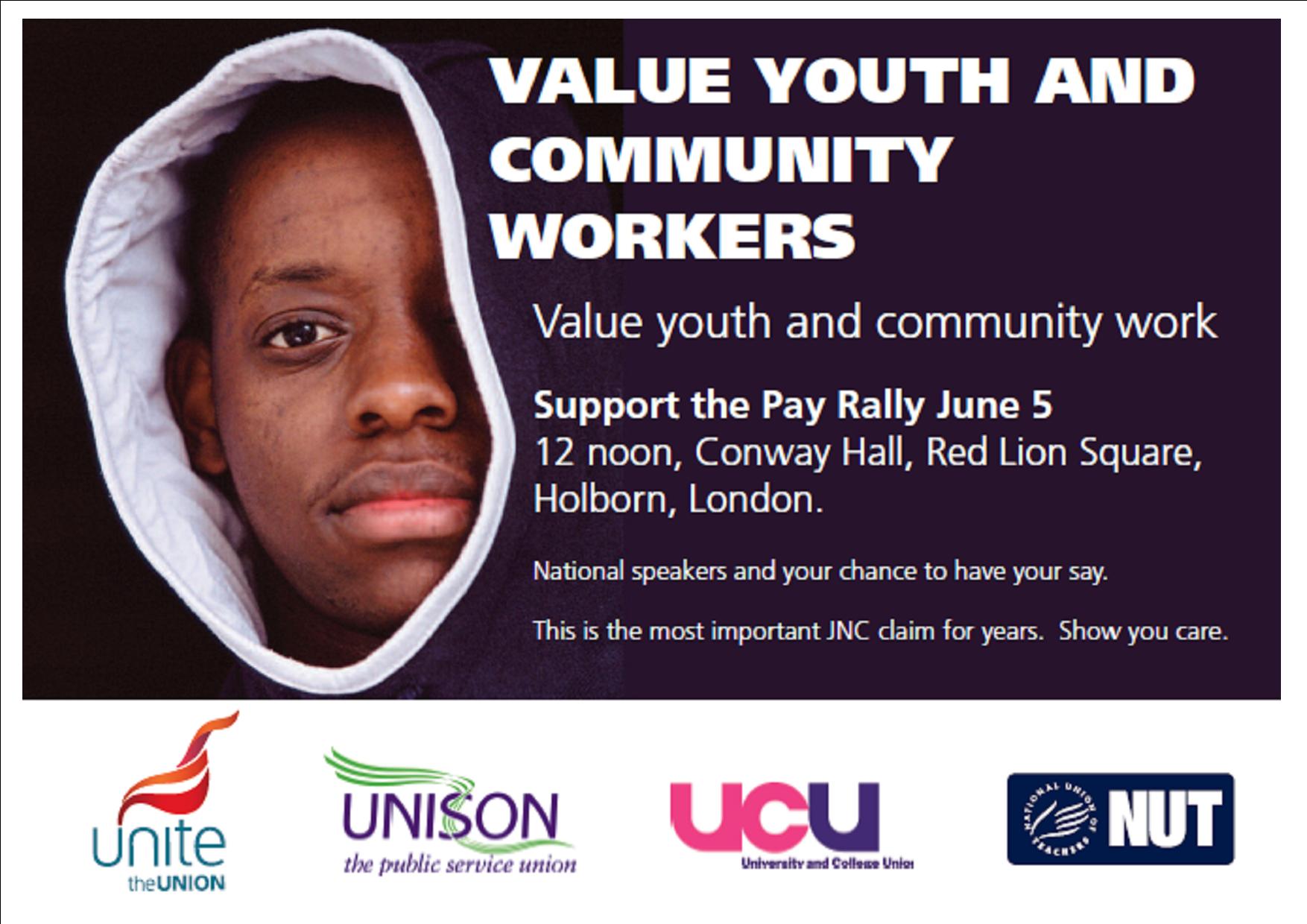 Paying youth and community workers properly and above inflation will help improve services to young
people and community organisations. It will put money in the local economy for growth and jobs.
Better pay for us boosts the economy and help start to reduce the national debt.
The all items Retail Price Index excluding mortgage interest payments – was 4.8 per cent in March, up from 4.2 per cent in February.
We have been told previously that accepting low pay will save jobs.
Last year local government unions accepted 1%, yet this did not stop 15,000 local government job losses over the last 15 months.
The employers will no doubt say they cannot afford our pay claim. Yet the government gave local government £3 billion extra this year. A miniscule fraction of this would enable every youth and community worker to have a substantial pay rise.
The employers say that they cannot use their additional £3 billion in reserves for pay rises. This is not the case.
We reject the fatalism that public sector workers must suffer to help pay the bankers who have created the national debt in the first place.
Youth and community workers deserve improved pay, emergency call out allowances and allowances for the increased late night duties. Our London and area allowances are amongst the very lowest. We are also seeking a job security agreement.
We have to assert our rights to decent pay. There is no chance of stopping more service and job and pension cuts if we cannot organise to campaign for pay.
This is why the joint unions are calling for your full individual and Branch participation in the pay claim this year. There will be lots to do. A concerted campaign is underway, it can only work if you are involved.