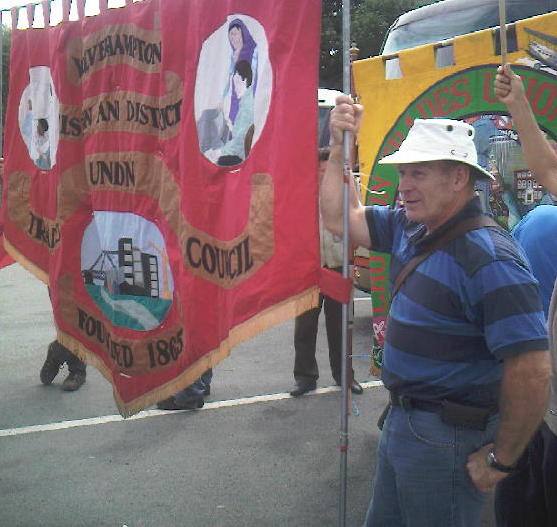 Good afternoon, my name is Nick Kelleher and I’d like to speak in tribute of Norman on behalf of Wolverhampton, Bilston & District Trades Union Council, from delegates both past and present and also from Wolverhampton branch of the Communist Party of Britain.

I have also received condolences from the national Cuba Solidarity Campaign

We mourn the loss of our comrade Norman Brackenridge

Our condolences go out to his wife Marg, his son Greg and to their family.

Without the support and understanding of Marg and his family, Norman wouldn’t have been able to have such a leading role in the labour movement as he did.

It was a great shock to us all. This is a speech that I did not expect to have to give for at least 20 years.

Norman saved lives as a Firefighter, he served his union the FBU for many years organising members and defending members; fighting for equality and for the service and developing cadres both in and out of the service.

I have found his advice so useful on many occasions when I have represented my own members at disciplinaries and he has been an inspiration to me as Secretary of the trades union council and for the twenty years that I have known Norman.

As you’ve heard today he was active both regionally and nationally and completely dedicated to his union.

He was an active delegate of the Fire Brigades Union to the Trades Union Council for over 40 years and served many of those years on our Executive Committee.

Indeed Norman attended our meeting the night before he died, when we’d discussed tax credits. When Norman died, it was in action, whilst emailing the Prime Minister to give him some much needed words of wisdom.

He served on the Midlands TUC and its Executive and fought many battles, often fruitlessly against a right-wing bureaucracy but never wavering in his principles or giving up.

Norman had also been Secretary of the County Association of Trades Councils. Mere attendance at it’s meetings deserves a medal on it’s own, as it can be the dullest of all meetings that you are ever likely to go to. As its Secretary for a couple of years he made it active, no mean feat and one which has never been repeated.

Norman was known for his solidarity actions in support of workers in dispute, joining picket lines all over the country, when workers were in struggle against their employers.

He made so many trade union friends amongst miners, dockers, electricians, care workers and from so many different unions.

Whenever we had strikers at meetings I was so pleased to see Norman, because I knew he would put them at their ease and inspire them in their struggle.

One winter meeting, 4 blacklisted electricians came from Manchester to speak to just 4 of us who made it through the snow in Wolverhampton to that meeting.

It didn’t turn out as embarrassing for us as it could have been, thanks to Norman’s warm welcome. The electricians went away not thinking they’d wasted their time, but they went home with good advice, new links and the promise of solidarity funds to be generated.

When Greg told me that Norman was a bit camera-shy and he didn’t have many photos of him, I checked our library of photos and found loads of Norman…………….. mostly though with his back to me!

There was a couple of photos of Norman at a Shrewsbury 24 demonstration which began with a shot of only the back of Norman’s head, as he was clambering up the huge monument outside Shrewsbury Shirehall. He had just helped put our trades council banner at the top of all the banners.

The next photo was one of just his feet, as he vaulted back down off the monument with the police waiting below.

Another escapade took place some years ago, after a few too many beers, with Derek Robinson & George Hickman one night.

Norman was spotted by two young coppers just as he’d decided that driving home wouldn’t be such a good idea.

They gave chase on foot across Wolverhampton, expecting to quickly catch a man over twice their age.

But he eluded capture, by out-running them, and was about to get the better of them, when a Wolverhampton Council paving slab had the better of him and knocked Normam flying.

Woe betide any future potential fugitives, as their path will hindered by paving slabs left unmaintained due to government cuts to the council.

It took the police some minutes to stop panting once they’d eventually caught up with Norman, before they could actually talk to him to apprehend him.

Norman’s main regret however came later at the police station. As soon as he had handed over the urine sample, he realised too late, that he’d just been standing in a closed cubicle, with full access to topping up his sample from the toilet bowl.

When he needed to be however, Norman could be quite deferential to authority.

On the way back once from a Dockers’ solidarity event in Liverpool, the sight of me slumped in the back of the car attracted police attention and we got pulled over.

He straight away put on the

“we’re all firefighters, brothers-in-arms with the police”, line

and we were soon away but with Norman offering some choice oaths for his brothers–in-arms!

I realised afterwards that these anecdotes seemed to have a bit of a theme of police involvement. I think they represent his anti-establishment views rather than too much waywardness.

This is borne out by his reason, his modesty aside, for turning down the offer of an MBE for his extensive charity work which was little known to many of us.

Norman would always be on demonstrations and supporting our activities.

He helped instigate Workers’ Memorial Day in the city and continued to support it each year.

He leafleted each election for the Labour Party and also for our anti-fascist campaigns. He hated racism and fascism in all its forms.

Due to the success of our campaigns, helped in no small part by Norman, Wolverhampton was the only part of the West Midlands that never elected a fascist councillor.

With the exception perhaps of a couple of local Tory councillors, over the years that Norman gave that title to.

Norman was a Communist and a true internationalist. Invariably when we had international visitors, he would be able to chat away with them about places in their country that he had visited in his time as a seaman.

Since retirement he has made many solidarity missions. Along with Phil Goalby he drove a fire appliance to Iraq and has spent many months on rebuilding work after the earthquake in Haiti and also after typhoons in the Philippines as well as several other trips to areas of disaster to give practical help.

No time spent in Norman’s company was ever wasted, he always had an interesting story and good advice; his politics were spot on and he lived his life as a true socialist.

Farewell comrade you are missed and will be remembered by the thousands of people you met and inspired.

The world was a better place because of your life. 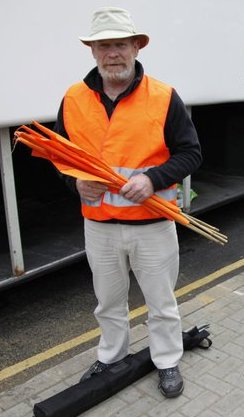 The family would like to thank the West Midlands Fire Service, the Fire Brigades Union, Wolverhampton, Bilston and District Trades Council, Wolverhampton City Council, Wulfrun Rugby club, the ramblers association, ROAB, All Hands Disaster relief and the many other groups and individuals who at some point worked with Norman for all their kind support and words of condolence. It makes a very difficult time for the family a little better knowing he had such a positive impact on so many people.

Norman was just 67, he died 16th October, instantly and unexpectedly, it is suspected of a heart attack while he was emailing Cameron about tax credits as we’d discussed at Trades Council the night before. 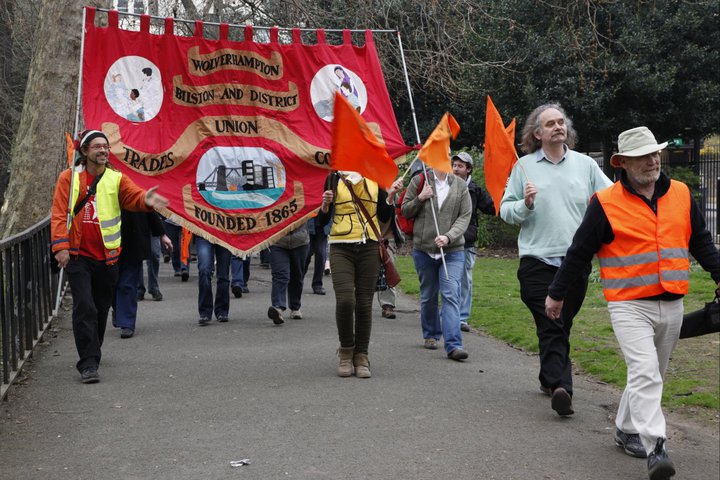