Unions representing over a million local government workers – GMB, UNISON and Unite agreed to escalate their dispute over pay rejecting the 1% offer. An improved offer has been made which will be consulted on.

The PCS union, which represents civil servants, says about 250,000 of its members will walk out on 15 October.  The PCS says that since 2010 pay freezes have resulted in a 20% cut in the income of civil servants, when adjusted for inflation and increases in pension contributions.

The strikes were in the run up to the TUC organised national demonstration on 18 October calling for decent pay.

Local government workers have suffered three years of a pay freeze, followed by a below inflation pay deal and have now been offered a paltry 1%. They have seen their pay reduced in value by 20% since 2010. This resulted in a one day strike on 10 July.

No further talks have taken place since that date, despite the unions offering to go to the Government’s arbitration and conciliation service. 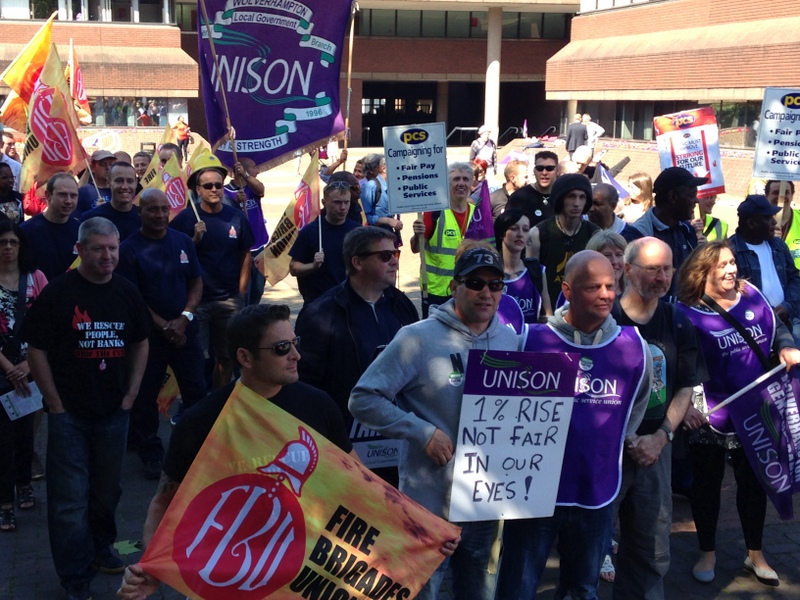 With banners from WB&DTUC, Unison, National Union of Teachers along with Fire Brigades Union and civil service union PCS. Tim Martin entertained with an electric ukulele and his anti-austerity songs, followed by a steel-pan band and samosas.

This strike is about pay – but it is also about the future of the services these employees provide. Services used by everyone.

Local government and school workers in England, Wales and Northern Ireland voted for strike action after rejecting the employers’ pay offer of just 1%.

While the employers argue that their offer is “fair” UNISON is stressing that it isn’t “fair” that the true value of their pay has fallen by 20% since 2010. 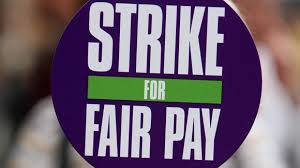 “Poverty pay is widespread across local councils. Household bills continue to soar, but our members’ buying power is constantly being eroded,” she said.

Ms Farmer said that around 400,000 council workers paid below £15,000-a-year for delivering vital local services were now “choosing between heating and eating.”

The FBU will strike between 10am and 7pm and will be the fifteenth in the FBU’s campaign.