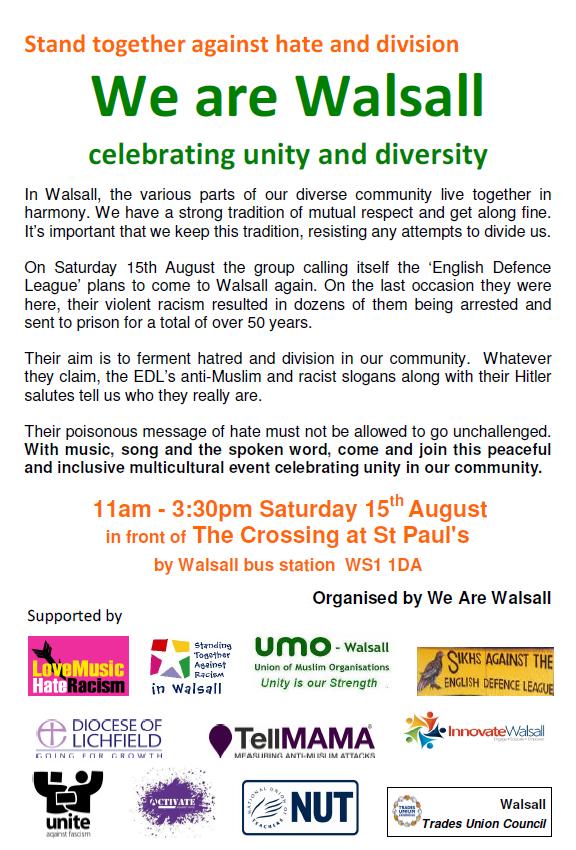 On 29th September 2012 a 1000 strong peaceful, We Are Walsall  rally protested against a gang of 200 racists who came to Walsall from a far a field as Scotland. 9 EDL supporters have been charged with violent crimes as a result.

Seven EDL supporters have admitted being involved in trouble that broke out during an English Defence League protest in Walsall town centre.  http://www.expressandstar.com/news/crime/2013/04/10/seven-admit-playing-a-part-in-walsall-edl-protest-violence/

and another two of them: http://www.expressandstar.com/news/2013/04/11/violent-disorder-at-walsall-english-defence-league-rally-admitted/ 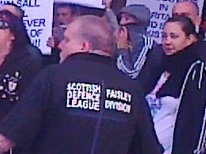 and this poor dab thought he was in Bristol! 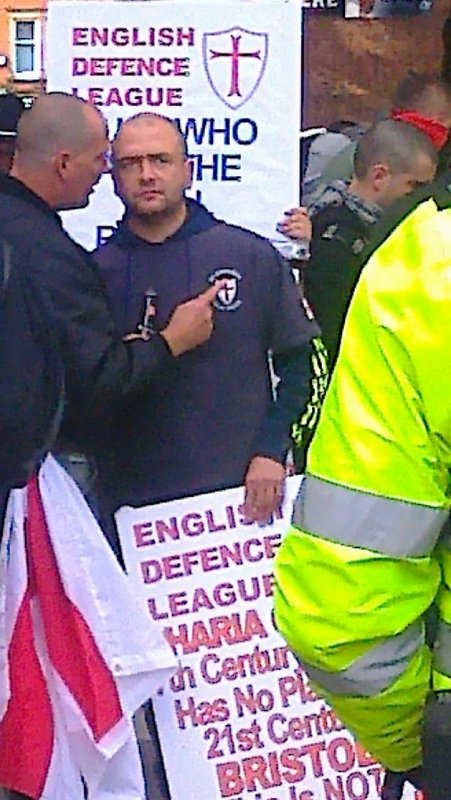 We Are Walsall – held a peaceful and inclusive celebration of unity in our community in front of the New Art Gallery.

The EDL’s aim was to ferment hatred and division in our community. They eventually started fighting each other and attacking the police. See here…..

Whatever they claim, the English Defence League’s anti-Muslim and racist ‘chants’ and their Hitler salutes tell us who they really are.  At their heart are fascists who have been active in the British National Party (BNP) and NF (National Front). Given the opportunity, the EDL threaten, abuse and intimidate anyone whose skin colour or ideas they don’t like. Their poisonous message of hate was not allowed to go unchallenged.

The various parts of our diverse community in Walsall live together in harmony. We are enriched by our multicultural heritage. We stood up against this attempt to divide us and to scapegoat a section of the town.

Walsall taxi drivers on strike against the EDL. Pic:Kelvin Williams

The English Defence League’s national demo in Walsall today brought together just 150 racists and fascists from around the country before degenerating into violence.

The EDL’s latest flop in the West Midlands town follows its crushing defeat when thousands of antifascists blocked its march and rally in Walthamstow, east London, earlier this month.

It has been riven with splits and recriminations, and the attempt to heal the organisation’s wounds in Walsall was a miserable failure.

This pitiful event, which ended with the EDL thugs fighting and throwing missiles at police, was another nail in the EDL’s coffin.

In contrast, 700 local people turned out for a We Are Walsall counter-protest against the racists and fascists – a lively celebration of multicultural unity that overflowed into dancing in the street (see video, on UAF website).

The anti-racist protestors included members of the Muslim community and trade unionists, with banners and flags from the Unite, NUT, Unison and PCS unions on display.

The We Are Walsall event was supported by local councillors and by Walsall MPs David Winnick and  Valerie Vaz, who spoke from the platform, telling the demonstrators there was ‘no place in Walsall’ for the EDL.

Other speakers included a representative of Sikhs Against the EDL and a local taxi driver, speaking on behalf of Walsall’s taxi drivers who staged a strike for the day in protest at the EDL’s racist and violent thugs.

UAF national secretary Weyman Bennett urged demonstrators to support the antifascist protest called by We Are Walthamstow on 27 October, when the EDL wants to make a second attempt at demonstrating in the borough. Local antifascists are determined to send the EDL packing again.