After a 20 month long dispute by Sandwell UNISON at Sandwell Leisure Trust against being fired and rehired to remove staff from national NJC pay, Sandwell Leisure Trust on Friday 13th May 2022 announced that they would be returning staff to national NJC pay.
Congratulations to all UNISON members who showed the resolve and determination to keep on fighting for 20 months and congratulations to GMB and UNITE members who took part in the solid day of strike action on 10 May 2022.
Thanks to all those that supported the dispute across the wider labour movement throughout the country.

On the last day of 20 months of Sandwell UNISON strike campaign, they were joined by GMB and UNITE members who had successfully voted for strike action in support of a 10% pay claim or a return to national pay.

“On Friday 13 May Sandwell Leisure Trust announced that it was returning all staff to national NCJ pay. This follows a 20 month long dispute by UNISON members where there were 7 strikes, 7 leafletting sessions of key councillors and 2 demonstrations.

The dispute lasted so long in part to staff being furloughed – but it still required us to win ballot after ballot to keep the dispute alive. It’s the longest running dispute in Sandwell’s history.

UNISON combined an industrial strategy with a political strategy to win this dispute from day one. Whilst it was great to be alongside GMB and Unite on the last picket lines on 10 May – this dispute was won politically.

Sandwell Leisure Trust has been fired itself after the Labour Council terminated it contract and the Chief Executive placed on leave. Now all 280 staff have been returned to national pay, 14 months after being fired and rehired.

I’d just like to place my thanks to your organisations for showing solidarity during our dispute- whether that be through joining us on leafletting sessions, picket lines or the demonstrations – as well as sending us donations. It was vital to help us sustain our 20 month long dispute.

More centres were affected and shut.  The 10 May picket lines:

The new Sandwell Aquatics Centre, where staff are in dispute, is a venue for the forthcoming Commonwealth Games.

20 months of strikes called by UNISON in the fight against Sandwell Leisure Trust’s totally unjust fire and rehire of staff to remove them from national NJC pay, terms and conditions, was the longest running industrial dispute in Sandwell’s history.

APRIL 2022 – GMB and UNITE have joined with UNISON in a joint pay claim. Each union has successfully balloted for strike action.

Sandwell Council decided to end its contract with Sandwell Leisure Trust.  UNISON welcomes the decision by a Labour Council not to continue to hire an organisation that fires and rehires staff to move them away from national pay, terms and conditions. However, what happens next still remains to be determined. UNISON’s preference would be for staff to be TUPE transferred back to the Council, but this may not happen.  Staff need to be returned to national NJC rates of pay and for this to be written into any future contracts if a decision to bring it back in-house. 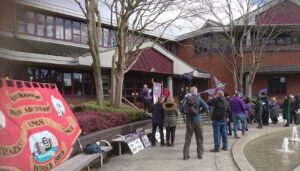 This is to send a clear and loud message that we will not go away until the Labour Council does the right thing and return staff back to national pay.

The UNISON branch has welcomed the decision by Sandwell Council not to renew a contract with an organisation that uses fire and rehire practices on its staff to remove them from national pay, terms and conditions.

UNISON is pleased that the Labour Council has applied Labour values of being against fire and rehire.

However, our members are yet to be returned to national pay bargaining so the dispute with Sandwell Leisure Trust continues.

UNISON is calling on Sandwell Council to step in to fix things, or even bring the arms length service of Sandwell Leisure Trust back in-house. Unless they do it is likely that the Commonwealth Games will be disrupted.

Any donations to our hardship fund made payable to Sandwell General UNISON Branch – (affiliated to WB&DTUC), can be sent to UNISON Office, West Bromwich Town Hall, Lodge Road, West Bromwich, B70 8DY.

Strike action took place on December 14th 2021 at  Portway Lifestyle Centre and Tipton Leisure Centre  where UNISON members voted by 85% on an 83% turnout to continue their fight. 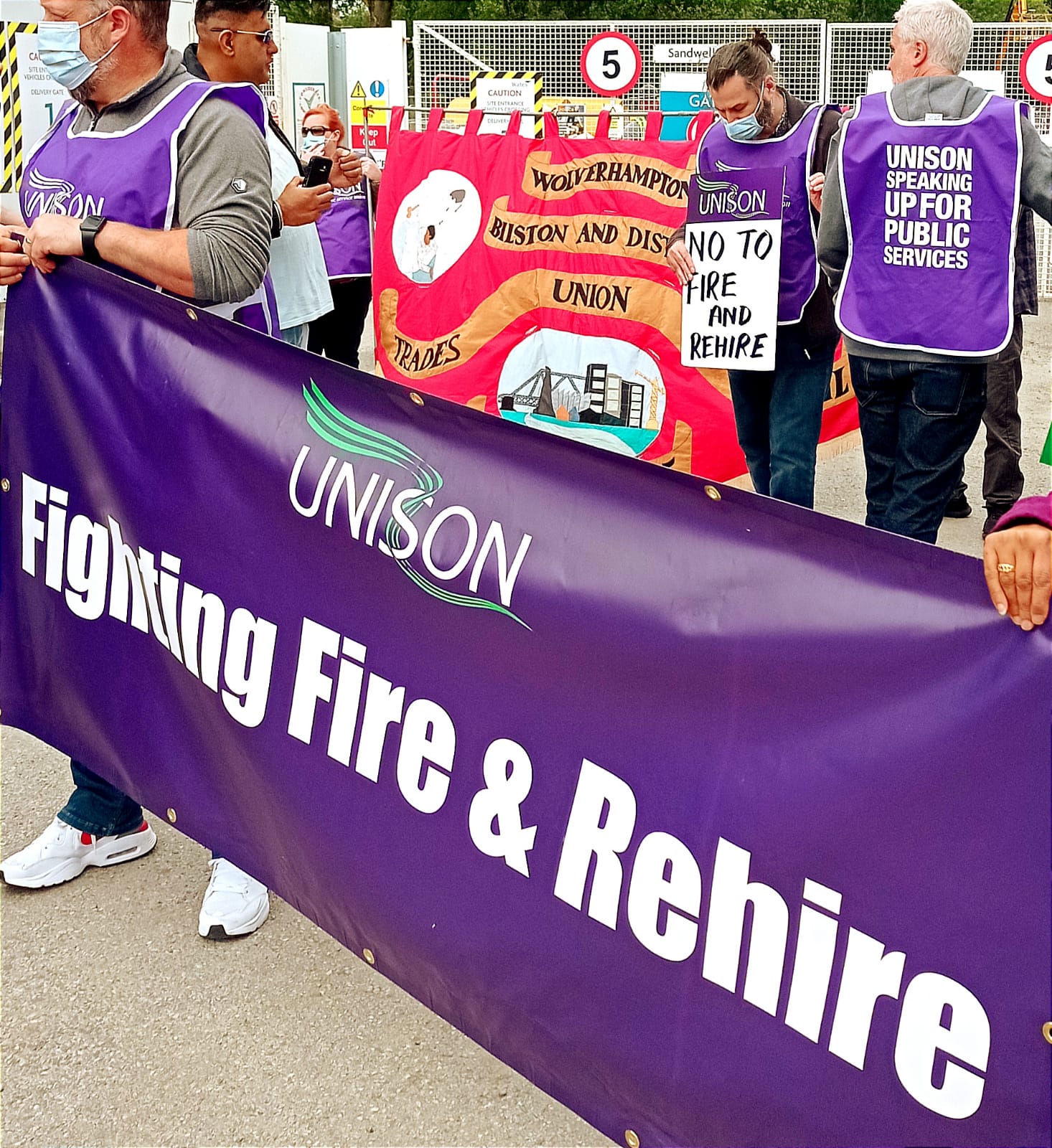 UNISON members working at Sandwell Leisure Trust took industrial action on Friday 30th April against their employer for moving away from NJC Pay, terms and conditions. Pickets forced closures and were visited by the local MP and councillors. More action is planned.

With the Leisure Centres still being owned by the Labour Council in Sandwell, the strike on Friday 30th April 2021 will demonstrate to the Board of Sandwell Leisure Trust (SLT) that UNISON will not tolerate staff being ‘fired and re-hired’ on worse terms and conditions now, nor in the future, when the promise from SLT not to make more changes runs out in March 2022.

At a time when a new £73million Aquatic Centre is being built in Sandwell for the 2022 Commonwealth Games, there can be no justification for attacking the pay or conditions of staff.

Sandwell Leisure Trust dismissed all employees to then re-engage on inferior terms and conditions to those negotiated nationally by their unions.