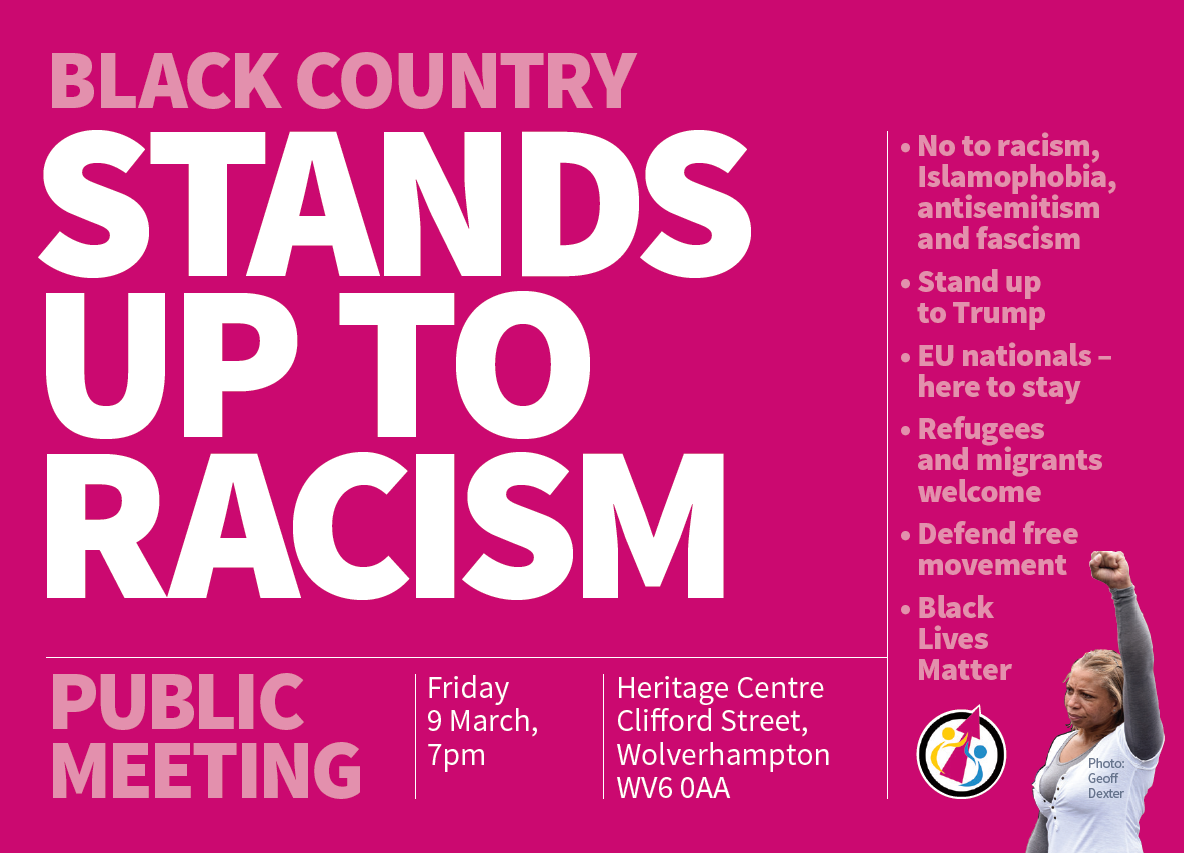 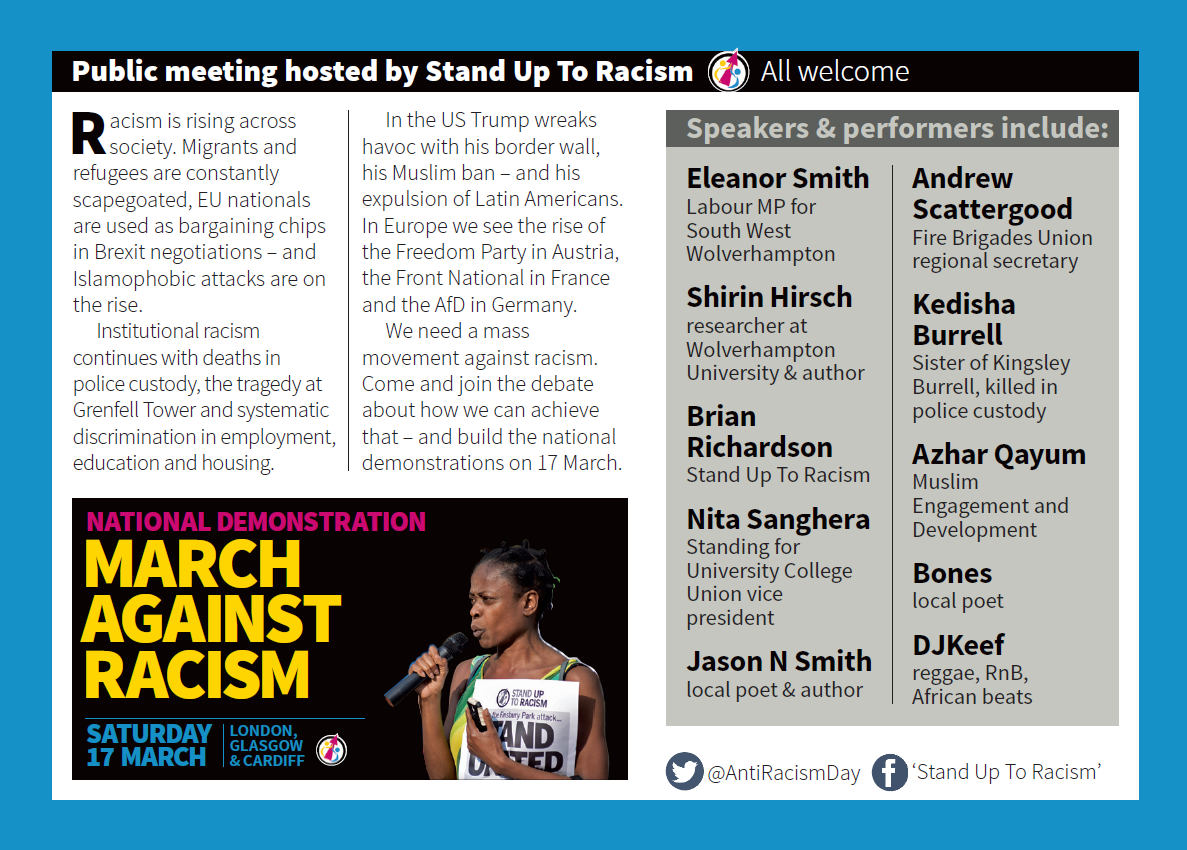 We will be demonstrating against them coming to our town. Let’s stand together against Britain first. Please join us

The original march in Wellington was banned – the fascists now have a short march in the administrative district from Telford railway station at 1pm and then back home to crawl back under their stones.
In Walsall, we have a strong tradition of mutual respect between different parts of our community and we get along fine. We need to keep it that way.
Saturday, 27th Feb, the so called ‘United Patriots’ plan a rally in Walsall. Their aim is to stir up division and hatred, aimed particularly at Walsall’s Muslims.
Come and celebrate unity in our community,  peaceful stand against their poisonous message of hate

Supported by: Stand up to Racism, We Are Walsall, Unite Against Fascism, Innovate Walsall, Tell MAMA, Love Music Hate Racism

Pegida, the right wing organisation which is fronted by the former EDL man Tommy Robinson, are planning to march through Birmingham on February 6th.

Fed Up with Racist Groups Marching in Dudley?
Then Join the UNITY Rally and March  Saturday 13 June 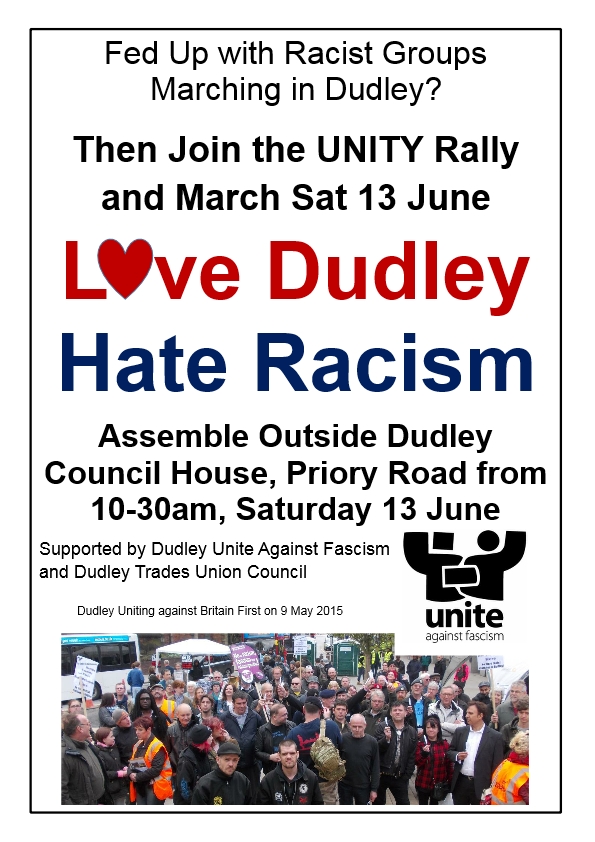 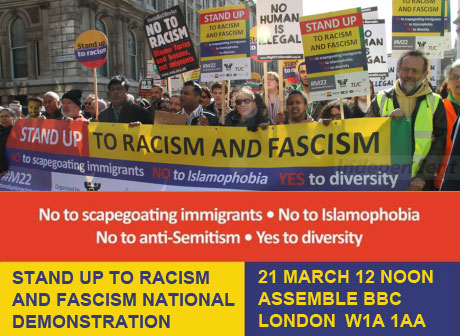 Far right and fascist organisations are gaining support across Europe including in Britain. Scapegoating immigrants for the fall in living standards, economic problems and austerity has provided the cutting edge for the growth of the far-right, racism and fascism.

Across the globe the promotion of fear and hatred of Muslims and Islam is continuing, creating a climate of Islamophobia that is directly leading to violent attacks on Muslim people and mosques, and other communities such as Sikh and Hindu people. Anti Semitic attacks have also coincided with a growth in support for fascism. African and Caribbean communities continue to experience racism as seen with the killing of Michael Brown in the USA.

Black Country Unite Against Fascism called a counter protest ‘Dudley United against Racism’ in response to the threatened demonstration by the EDL on Saturday 7th February Castle Hill/Castle Street from 11am until the racist EDL left town.  The decision to call the counter protest was supported by Dudley Trades Union Council  and other groups and individuals.

The EDL came to Dudley to ferment hatred, division and stir up racism. They say they want to stop the Mosque, branding all Muslims as terrorists, and the dreadful, unacceptable events in France will no doubt be invoked to justify their cause.
Wherever the EDL have turned up, we have seen drunkenness and fighting with random attacks on property, places of worship and people of ethnic minority background. When they came to Dudley in 2010, the Mosque a Hindu Temple and several Asian people were attacked.
We are all, including the Muslim community united in our condemnation of the massacre of innocent people in France but we firmly reject the Islamophobia and racism of the EDL and call upon every one, people of faith, those with no religion, Trade unionists and those who believe in a just and tolerant society to stand firm with us in the Square on Saturday 7th February to send a message to the EDL that not only are they not welcome here. We are Dudley, united against racism and we will not give the EDL the freedom of our town.
Jerry Langford, Black Country Unite Against Fascism

Cathy Bayton, President of Dudley Trades Council, has called for trade unionists from all over the Black Country to come and stand in solidarity, with their comrades, and show the Racist EDL that they are not welcome in Dudley, or anywhere for that matter and we will stand strong with our brothers and sisters and peacefully resist their attempts to stir up racist violence.  Dudley hosted its first live Love Music Hate Racism event in 2014 and that showed unity across all sectors of the community.  I urge all members of trade unions not to allow this unity to be destroyed and to join us on 7th February in the counter protest Stone Street Square, Dudley.

“It is hugely important in the current climate that we all, people of different faiths and none, stand together against hate and division in our community. I hope that as many as possible will join the peaceful and united assembly against the poison of the EDL in Dudley on Saturday 7th  February “
Martin Lynch, Joint Secretary Dudley National Union Teachers

We condemn the recent killings of innocent people in Paris, the Massacre of 142 children in Peshawar in December has clearly shown that terrorists have no religion. We the people in Dudley are united against the terrorists, the extremists and those who spread hatred and divisions among our society.

In 2014, 10,000 people marched in central London for UN Anti-Racism day which commemorates the anniversary of the Sharpeville massacre in Apartheid South Africa. It was part of a series of demonstrations across Europe and around the world.

Many organisations will be coming together again on 21 March 2015 to reject racism, Islamophobia and anti-Semitism; to celebrate diversity and make migrants welcome, to demonstrate our confidence in a future free of scapegoating, racism and hatred, and to remember Nelson Mandela and cherish the idea for a free and democratic society in which all persons live together in harmony and equal opportunities.

We are Birmingham – Don’t let the racists divide us!

Saturday 11 October 2014 Victoria Square, Birmingham to oppose the EDL March planned in Birmingham with a peaceful and vibrant counter protest.

■ No to scapegoating of immigrants ■ No to Islamophobia ■ Yes to diversity

11am, Saturday 22nd March Parade from the Mandela Statue in Parliament to rally at Trafalgar Square

Visit the Stand up to racism website it has full details of travel to London from around the country, a full list of signatories to the statement and you can download the latest leaflet and poster: www.standuptoracism.org.uk

A day of action against racism has been called for across Europe to coincide with the marking of UN Anti-Racism Day in 2014, with eyes on the European elections in May.

Already in most European countries parties of the right, centre and even the traditional left are allowing the terrain of these elections to be dominated by racism, xenophobia, anti-Semitism and the scapegoating of minorities – Muslims, immigrants, Roma, Black and Asian communities. Across Europe the fascist and populist racist right are on the rise.

From the violent Golden Dawn in Greece, the anti-Roma Jobbik in Hungary, the Islamophobic Freedom Party of Geert Wilders in the Netherlands to the success of the Front National in France, these currents are encouraging hatred, fear and prejudice in a frightening wave across the continent. In Britain the far right is hoping for gains in the Euro elections.

The British National Party (BNP) is seeking the re-election of Nick Griffin in the North West and Andrew Brons is seeking re-election in Yorkshire and the Humber.

The mainstream political parties look set to capitulate to UKIP in their calls for draconian ‘anti-immigration’ policies and promoting a ‘Little Englander’ anti-foreign, anti-Europe mentality. The ‘go-home’ vans sent out by the Home Office over the summer are a sign of things to come.

Hostility is already being stirred up towards Bulgarian and Romanian migrant workers who will be able to work here from January.

Such campaigns simply whip up racism in general and induce a ‘blame game’ for falling living standards and squeezed incomes that falls on visible minorities in stepped up discrimination, institutional racism, abuse and violence. This all encourages currents like the English Defence League, which turn their Islamophobic prejudices into real attempts to terrorise the Muslim population – attacking Mosques, assaulting veiled women, insulting religious sensitivities with vile slogans and throwing pigs’ heads, and organising intimidating marches into Muslim communities.

Following the rising violence of Golden Dawn and the murder of anti-fascist rapper Pavlos Fyssas, (also known as Killah P), the Greek anti-fascist and anti-racist movement has proposed that next year’s UN Day Against Race Discrimination on March 21/22 should be the focus for actions against racism and fascism across Europe. While there is a real threat that openly racist parties may win the 2014 Euro-elections in some countries, this can be prevented by the widest possible unity against them and the mobilisation of the broadest progressive forces. Unite Against Fascism has therefore initiated this call for a demonstration and rally to Stand Up to Racism in London on Saturday 22nd March.

We endorse this proposal and call on all those of goodwill to join us in a riposte to the rise of racism, to show that migrants are welcome and demonstrate our confidence in a future free of scapegoating and hatred.