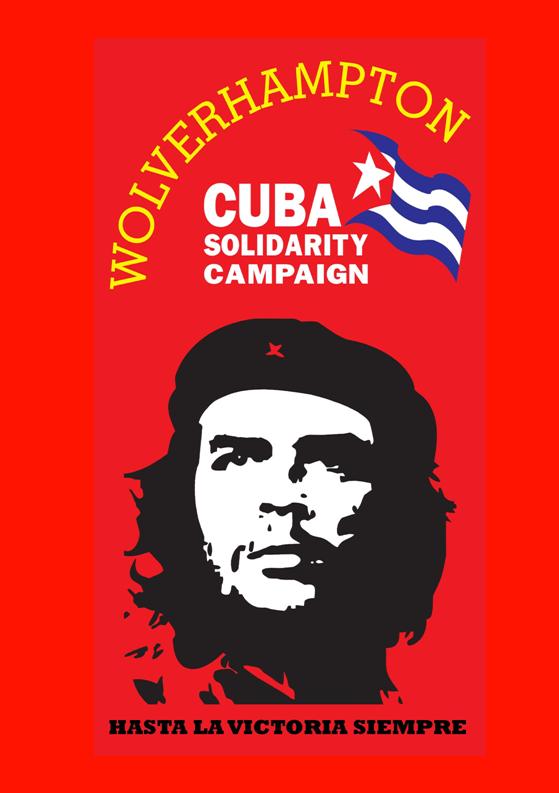 Co-op Bank have closed Cuba Solidarity and Palestine Solidarity accounts without warning. No longer an ethical bank as was taken over by U.S. hedge fund who are now exerting political on a British institution.

Unity trust bank which was set up by the TUC is the bank to trust for political accounts. Wolves trades council always used Unity Trust.

A review of the last 12 months 17 December 2014: Cuba and the US announce the establishment of diplomatic ties. The final three members of the Miami Five are released and return home to Cuba after more than 16 years unjust imprisonment in US jails. Statements by the Cuban and US governments announce diplomatic relations will be established.

Watch the moment the Five were reunited with their families again.

24 December 2014: The US State Department announces $11 million in grants for US and foreign-based organisations to run “civil, political and labour rights” (aka regime change) programmes in Cuba.

6 January 2015: Gema Hernandez, the daughter of Miami Five prisoner Gerardo and his wife Adriana is born. The “miracle” baby is the result of secret IVF treatment begun while Gerardo was in jail and despite the fact Adriana was denied a visa to visit her husband for almost his entire sentence.

22 January 2015: Diplomatic relations begin between the two countries, with the first round of talks taking place in Havana. 11 April 2015: Presidents Castro and Obama attend the Summit of the Americas(OAS) and hold historic bilateral meetings – the first face-to-face meeting between Cuban and US leaders in almost 60 years. Raul’s speech to the OAS is the first by a Cuban president since 1962.

29 May 2015: Cuba is officially removed from the US government’s State Sponsors of Terrorism list.

12 June 2015: The US Appropriations Committee approves $30 million for programmesto “promote democracy and strengthen civil society” (aka regime change) in 2016. This is on top of $20 million already assigned for similar activities in 2015. 20 July and 17 August 2015: The Cuban embassy in Washington DC is opened on 20 July, closely followed by the US Embassy in Havana on 17 August. Watch the Democracy Now report from the US Embassy opening in Havana.

16 September 2015: Cuba presents its 2015 report on the impact of the blockade in advance of the United Nations vote. It estimates that the US policy has cost the country more than $833 million over five decades.

3 October 2015: Solidarity campaigners are urged to remain vigilant about US intentions at the Cuban Futures Conference in London.

“We might end up with the American electorate deciding to elect Marco Rubio, Jeb Bush, Donald Trump – nobody knows what the possibilities are … We haven’t reached the moment where these processes are irreversible yet.” Former Cuban diplomat Carlos Alzugaray. 27 October 2015: The US remains isolated at the United Nations General Assembly vote. 191 countries vote with Cuba to condemn the blockade with just the US and Israel voting against.

“The lifting of the blockade will be the essential element to give some meaning to the progress achieved over the past few months in the relations between both countries and shall set the pace towards normalization.” Cuban Foreign Minister Bruno Rodriguez.

10 November 2015: A historic ruling by the British Court of Appeal opens the door for René González and other members of the Miami Five to visit Britain in 2016. The Court ruled that the British government had breached the freedom of MPs to hear from René after they denied him a visa to attend a meeting at the House of Commons. The Miami Five have already visited more than 20 countries between them since their release, apart from Britain.

18 November 2015: Joint agreements on environmental protection and marine conservation are signed between Cuba and the US – the first direct cooperative agreements reached since negotiations between the two countries began.

25 November 2015: News breaks that the Cooperative bank has closed the account of the Cuba Solidarity Campaign as the bank has changed “its risk appetite”. A campaign against this is launched.

December 8 2015: Cuba and the US begin talks on property claims by individuals and companies who left Cuba after the Revolution in 1959. The two countries also agree to reestablish a direct postal service after more than five decades without one. Bills will be presented before Congress in 2016 which aim to relax travel by US citizens and increase trade with Cuba. However, the cornerstones of blockade legislation: the Helms-Burton Act, the Trading with the Enemy Act, and the Cuban Democracy Act remain in place and must be removed before the blockade can end.

There are five core issues which need to be tackled before relations between the two countries can be considered normal:

Action by the US Congress is essential to make these changes. But our own British government has a role to play in joining international pressure on the United States government to end the blockade and return Guantánamo to Cuba, as well as ending discriminatory banking practices which impact on British companies.

Please support the campaign to end the US blockade.

Join CSC here, or donate to our campaigning work in 2016 here.

Cuba Garden Party was held on

all proceeds to Cuba Solidarity

Gladys Ayallon, European Officer for the Cuban Institute for Friendship with the Peoples and Elio Gamez, the Vice-President of ICAP visited Bilston on Monday 13th June 2011 and a public meeting was held.

ICAP was founded on December 30 1960, as a result of the enthusiasm and solidarity around the world after the victory of the Cuban Revolution.

The objectives of the are the promotion in all possible ways the relationships of friendship towards Cuba; at the same time it promotes in the island the knowledge of a political, social and cultural reality to the countries have relationships with the Institute.

For more information go to http://www.embacubasiria.com/solidaridad070608e-icap.html

July 2009,  two  visiting Cuban women  were present and  gave a first hand experience of the island’s 50 years of socialism.

Father GEOFF BOTTOMS,UK CO-ORDINATOR OF THE CAMPAIGN TO FREE THE FIVE
& STEVE COTTINGHAM spoke at our public meeting on FRIDAY 6 OCTOBER 07

TOTALLY TRIVIAL Quiz was held in November at the OLDE WHITE ROSE pub Biston. There was a good turnout for the excellent beer. Turned out to be a good fundraiser.

April 06 meeting CSC.
An enthusiastic group watched the film Mission Against Terror and talked with film-makers Roberto Ruiz and Bernie Dwyer.
The film is well worth watching and Wolverhampton Cuba Solidarity Campaign has a copy in DVD format which it can lend to members.

The case of the Miami 5 is little known in Britain. It is important that the story becomes more widely known, in particular because it highlights how ready the present US administration is to ignore human rights.

In the case of Cuba, the United States condemns the country for the violation of human rights and seeks to persuade, cajole and bully other countries into following its lead. The US is using the age-old tactic of the playground bully who seeks to blame others for his own wrong-doings. The US has no moral right whatsoever to condemn Cuba.

The case of Guantanamo Bay has highlighted in the national media that the United States clearly violates human rights. The difference between Guantanamo Bay and the Miami 5 is that hardly anyone knows about the 5.

You can find more information on the web at http://www.freethefive.org/

The Miami 5 would really appreciate a letter of support. You can write in English or Spanish.