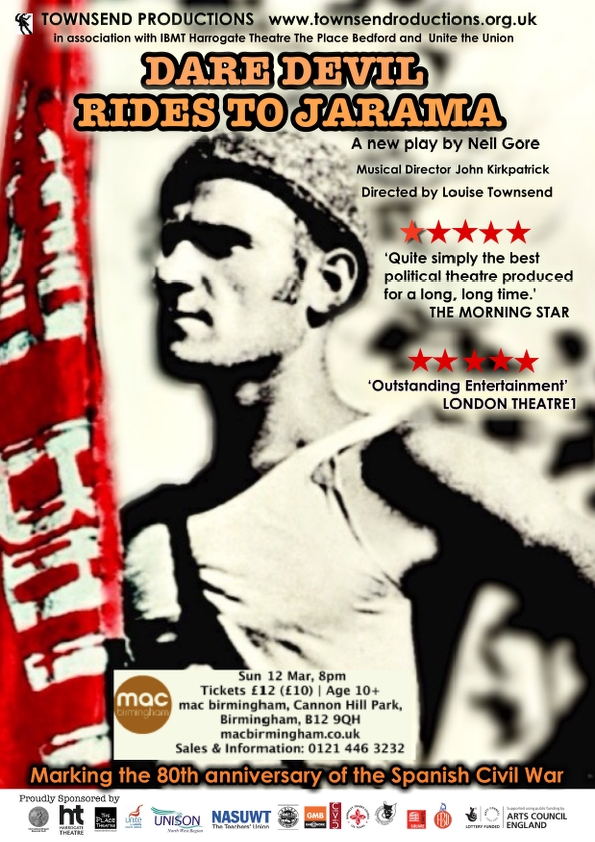 in association with UNITE the union and International Brigades Memorial Trust, which are both linked to our trades union council.

It’s about 1930’s famous speedway and wall of death star, Clem ‘Dare Devil’ Beckett who fought for better wages in his sport and Marxist writer and poet Christopher Caudwell, at first sight two unlikely friends and comrades, who were thrown together by their shared determination to defend the Spanish republic against Franco’s rising fascist tide.

The Townsend Productions show has been commissioned by the Internatioinal Brigades Memorial Trust and sponsored by all the Trade Unions it marks the 80th anniversary of the International Brigades and The Spanish Civil War. Amazing reviews and audience response. Highlighted as one of the top shows in London for 2016 by London Theatre 1.

When Spaniards rose up to resist General Franco’s military rebellion in 1936, it was an inspiration to millions of people worldwide. Their heroic struggle alerted the rest of the world to the threat of fascism. Dare Devil Rides To Jarama commemorates and celebrates the contribution and sacrifice of the Volunteer International Brigades, including two and a half thousand from Britain and Ireland.

Compelling and humorous, Dare Devil Rides To Jarama focuses on the contrasting lives of Clem Beckett, born in Oldham and famous star of the speedway track around Manchester and the North, and Christopher Caudwell, a renowned writer, poet and philosopher. Both men were killed together at Jarama in February 1937, having become friends as members of the British Battalion’s machine-gun company.

‘The play, a two hander in Harrogate Theatre’s Studio, is a powerful evocation of those troubled times.’ Yorkshire Times
http://www.yorkshiretimes.co.uk/…/Dare-Devil-Rides-To-Jarama

‘This is a thoughtful, lively production’ British Theatre Guide http://www.britishtheatreguide.info/reviews/dare-devil-ride-the-bussey-buil-13644

Dare Devil Rides to Jarama at @Busseybuilding ‘history with heaps of heart’ The Bardette
http://thebardette.co.uk/dare-devil-rides-jarama-bussey-bu…/  …