Halesowen UCU members have taken an initial day of strike action over the sacking of the 4 lecturers.  Action Short of Strike Action began March 25th.  Employment Tribunals are lodged.

This is part of the current dispute over the dismissal of the Halesowen 4. The branch have given notice that action short of a strike to include lesson observation boycotts and a boycott of the weekly learner teaching programme is set to begin on Monday 25th. This has been met with excessively aggressive tactics by the Principal, who having stalled action with an agreement to talk refused to allow our regional official to attend and refused to discuss or negotiate over the issue, is now threatening the branch with one day deductions over the one hour ASOAS and legal action to try and get rid of dissent. This seems to the branch a real attempt to crush activism and crush the campaign.

The union is expected to announce strike dates soon if no breakthrough can be found. Messages of support to rhiannonlockley@hotmail.co.uk‘

David Muritu (Branch Secretary of lecturers’ union UCU at Halesowen College) and three other UCU activists including the branch LGBT rep, have now been dismissed from their jobs as Maths Lecturers at Halesowen College.  The College failed to follow their own disciplinary procedure or ACAS guidelines; evidence provided did not, by their own admission, support an accusation of misconduct.

Hundreds of students and trade unionists held a rally on Sat. 26th January outside Halesowen College. UCU members came from all over the Midlands as well as from Wales, London and South West, joined by many local unions and trades union councils.

A march was held by protesters from the college through Halesowen and back in support of the four sacked UCU lecturers to coincide with the College’s open-day. 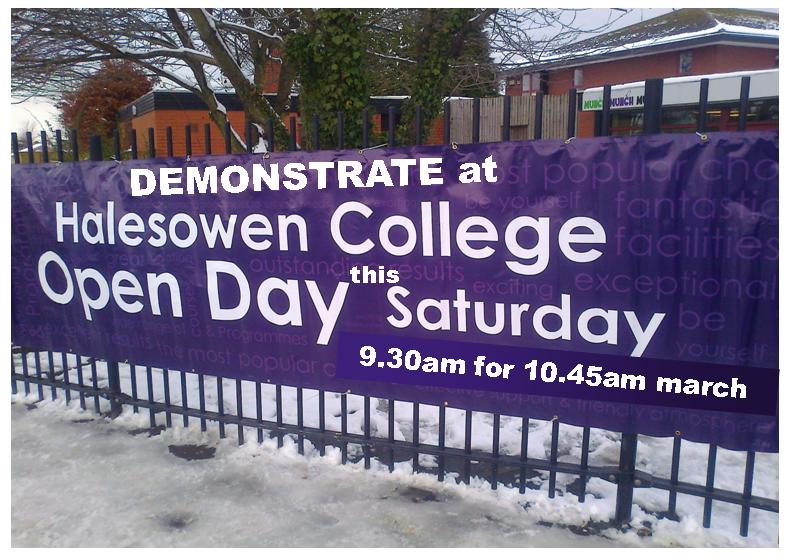 UCU says all four teachers had good records and it was the college’s failings and selective use of information that allowed them to get rid of the staff.

The union says the students’ failures may be a result of a litany of poor management practices by the college, which include:

There were no issues related to lecturers’ competence, none had conduct issues cited in their dismissal and the college admitted there were no individual classroom capability issues. The staff were all dismissed because their students failed to reach expected attainment levels.
UCU regional official, Nick Varney, said: ‘Nobody wants to see strike action or any further disruption at Halesowen, but staff there feel they have been left with no choice.
‘We would like to think the college would be prepared to talk to us about finding a better way to resolve this sorry situation, but we can’t say we’re hopeful of that happening.
‘These members of staff were unfairly sacked and it is quite right and proper that their colleagues should defend them and let the college know it cannot continue to act like this.’

A UCU rally was held on Thursday 24th January outside Halesowen College in support of David Muritu whose appeal was being heard, and rejected.  Other appeals are to be heard on 5th and 6th February when there will be more rallies.

The College claims that the dismissal was made on the basis of David’s results (which are above the national average). David has been rated as a grade 2 (good) lecturer by the College’s own observation system.  Three more Maths Lecturers, all of them active UCU members, have since all been dismissed. This is clearly the employers attempt to find culprits from within the teaching staff for their own management failures

There is an online petition at http://tinyurl.com/Halesowen4 which is over an amazing 12,000 signatures.  Please take the time to sign it and distribute it to your colleagues. UCU has been amazed at the response so far from the wider labour movement.

This action has been taken against 4 active members and officers of the UCU branch at Halesowen College.  This is an attack on trade unionism, an attack on freedom, and an attack on education. It will have disastrous consequences for students and teachers.  Most importantly, David and the Maths team believe that all students have to the right to education.

Messages of support can be sent to the Branch Secretary at HalesowenUCU_branch_secretary@hotmail.com

WB&DTUC urges all delegates and active trade unionists to support this vital demonstration of trade union solidarity with our sacked colleagues:

10.45am march -coincides with the College’s open-day

Rachel, one of the four sacked UCU Halesowen Maths lecturers spoke of her ordeal.

UCU branch secretary David Muritu was sacked before Xmas with three other Maths lecturers, also all active in UCU college lecturer’s’ union were sacked after the Xmas break. [A 5th lecturer who was also threatened but was not in UCU was not sacked.]

Several consultants had been brought into the department over previous two years to continually assess staff.

They were proved to be good teachers by these reports but were expected to teach two classes at once on occasions and non-Maths cover for several long-term absences which impacted on students’ performance.

Their dismissal letters stated they were dismissed not for gross misconduct and that they were regarded as good teachers. Due to pupil under-performance they were being sacked without use of any capability procedure.

New teachers had started before the hearings had taken place.

Brian O’Sulivan regional UCU Chair reported that over 100 had attended a public meeting a few days before and an amazing 11,000 had sgined the online petition, demonstrating superb labour movement support for the union’s campaign.

Thursday 24th January 1pm rally outside Halesowen College in support of David Muritu whose appeal is being heard.

Saturday 26th January UCU national demonstration in support of the four sacked UCU lecturers, outside Halesowen College assemble 9.30am for 10.45am march, coincides with the College’s open-day.  Transport agreed to be organised by WB&DTUC and UCU locally contact Nick Kelleher/Adam Dwight