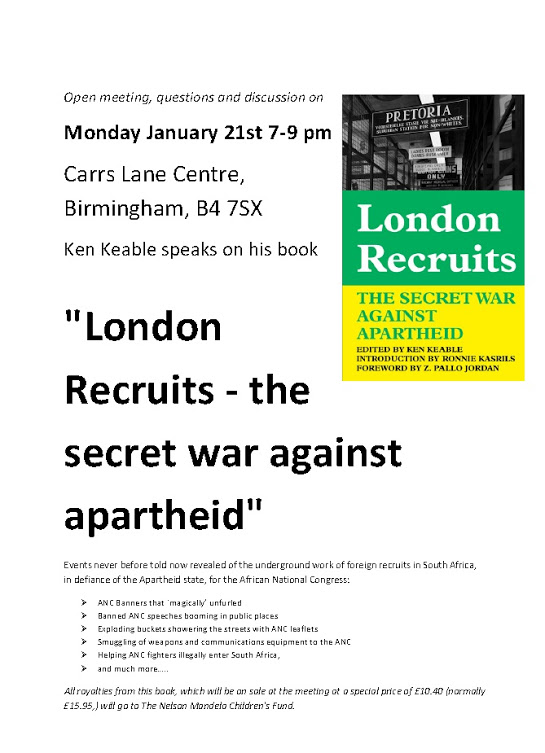 The history of the Anti-Apartheid movement brings up images of boycotts and public campaigns in Britain. But another story went on behind the scenes, in secret, one that has been never told before.

This is the story of the foreign recruits and their activities in South Africa, how they acted in defiance of the Apartheid government and its police on the instructions of the African National Congress. It tells of:

Many recruits were Young Communists, others were Trotskyists or independent socialists; from Britain, Ireland, the Netherlands, and the US, and they all took amazing risks.

Some paid a heavy price for their support. This is their untold story.

to buy a copy of  “London Recruits: The Secret War Against Apartheid”:  http://shop.morningstaronline.co.uk/content/london-recruits-secret-war-against-apartheid

more reviews of  “London Recruits: The Secret War Against Apartheid”:

This amateur video (made, and just released, by one of the Recruits who still wishes to remain anonymous) shows the official launch of the bookLondon Recruits – the secret war against apartheid in a packed committee room of the House of Commons by Peter Hain MP on 11 July 2010.
It lasts one hour 25 minutes. You have to wait a few minutes before it starts.
http://vimeo.com/57451024
Among the speakers are Peter Hain, Ronnie Kasrils, myself, Sean Hosey, Katherine Levine, Mary Chamberlain, John Rose, George Bridges, His Excellency Mr Zola Skweyiya (the South African High Commissioner) and Bob Newland.
It is a wonderful record of a historic and unforgettable occasion. About 100 people were present.