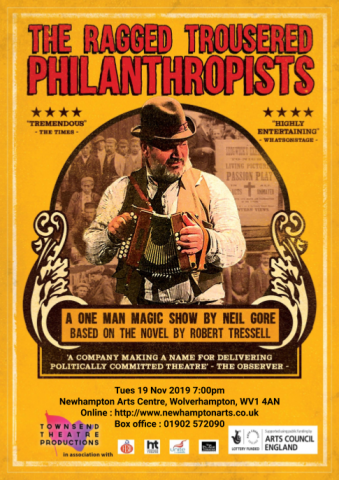 Townsend Theatre Productions are putting on their adaptation of ‘The Ragged Trousered Philanthropists’ at Newhampton Arts Centre, W’ton on
Tuesday 19th November.
http://www.newhamptonarts.co.uk/the-ragged-trousered-philanthropists/

Morning Star’s review of the play

This adaptation of Robert Tressell’s famous novel is a hilarious fast-paced show that shares with its audience a year in the life of a group of painters and decorators, as they renovate a three-storey town house for Mayor Sweater. It traces their struggle for survival in a complacent and stagnating Edwardian England. These workers are the “philanthropists” who throw themselves into back-breaking work for poverty wages in order to generate profit for their masters.
The book is available here. Voted one of the nation’s 100 best-loved books in the BBC’s recent ‘Big Read’ event, The Ragged Trousered Philanthropists is an influential classic of working class literature. Written in the early years of the last century but not published in full until 1955, it has now been translated into six languages and sold millions of copies worldwide.

Christine Coates, Librarian of the TUC Collections, said: ‘This is a book which changes lives and has had a profound effect on tens of thousands of workers since it was first published in 1914. I never fail to be surprised at the power of The Ragged Trousered Philanthropists, the story of a group of painters in a small town on the south coast of England at the beginning of the 20th century, to evoke immediate sympathy and support from readers around the world.’

Robert Tressell Society  2011 is the centenary of his death.