The proposals were amended following comments and suggestions from thousands of service users, residents, staff and other stakeholders in what was the city council’s biggest ever consultation exercise.

The decision was subsequently “called in”, meaning the proposals were to be considered by members of the council’s Scrutiny Board on December 18, 2012. Scrutiny Board can either “note” the report, meaning it can be implemented as planned, or refer the matter back to Cabinet for further consideration.

Subject to the outcome from the Scrutiny Panel meeting, the plans will see a number of centres created in locations around the city which will offer a wide range of services from under one roof.

Cabinet agreed that six libraries – Central, Finchfield, Low Hill, Penn, Tettenhall and Whitmore Reans – will continue to be provided as they are at present, five libraries – Blakenhall, East Park, Long Knowle, Pendeford and Wednesfield – will become the location for the new community hubs while the other five – Ashmore Park, Collingwood, Spring Vale, Bilston and Warstones – will be relocated to new premises, though the latter two will be subject to further consultation.

Of the city’s 13 youth centres, it is proposed that nine – Bushbury, Duke Street, Dunstall, The Gorge, Graiseley, Park Village, Rocket Pool and Springfield Youth Centres and Epic Youth Cafe – will be retained as they are and three – Low Hill, Mirage and Oakley/Buckley – will be relocated to community hubs.

All Saints, Dovecotes and Woodcross Community Centres will be transferred to new providers while Fordhouses and Oxley Community Centre has become part of the North East Wolverhampton Academy’s new Diploma Learning Centre while.

Portobello and Lanesfield Community Centres will be required to become self-sufficient.

It is expected that the first new community hubs, those in Ashmore Park, Blakenhall, Long Knowle, Low Hill, Parkfield, Pendeford/Priory Green and Wednesfield, will be completed between 2013 and 2014.

Thousands of people took part in the consultation which shaped the proposals. More than 1,800 people attended meetings, while feedback from over 1,000 questionnaires, 12 petitions and hundreds of letters was also taken on board.

W’ton Council – the ‘No to Hubs’ petition was heard with the Penn Library petition at Council, Civic Centre on 7th November 2013

This is a general petition that can be signed by people right across Wolverhampton.

You can sign this petition even if you have already signed one of the local petitions.

Please note  the petition text extremely carefully – it is not saying no to the concept of hubs, it is saying no to Wolverhampton Council’s current vision for hubs as it poses too great a threat to branch libraries and community centres.

A meeting of 50 people was held 31 July to form a  ‘Libraries and Community Centres Action Group’.

The aim is to explore ways in which residents and communities can work together to continue to respond to the Council’s proposals for our libraries and community centres.

& 7 community centres in Wolverhampton face being shut down or moved. 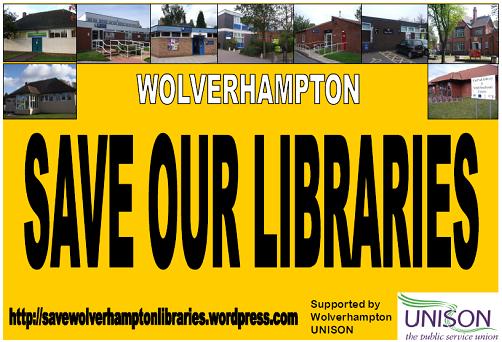 Tettenhall Library and Central Library would be the only ones in the city to remain as single-purpose buildings.

Under the proposals, libraries, youth centres and community centres would relocate under one roof at venues across the city, with some facilities closed down completely.

Campaigners from Save Finchfield Library addressed trade union delegates at our July meeting and support was pledged from UNISON, who represent librarians affected plus from all other local unions.

Council officers estimate cuts will save them £1.1 million over the next two years – around £600,000 of which will come from staff cuts.

A senior council officer was quoted as saying that “a library is 3,000 books plus a member of staff” (and not necessarily a librarian)

Walsall Library Consultation Report 2011:  ‘The library is far more than a building with books in it’

Library users around the city said they were “very concerned” at the plans and have established community petitions and campaigns to fight to save their public services.

On 26th June Wolverhampton Council met to agree to start consultation about the future of libraries in Wolverhampton.

A twelve week consultation process was due to begin on 27th July. However, opposition members called this decison in for scrutiny, and the Council halted their consultation. All meetings and questionnaire were postponed pending the meeting of the Scrutiny Board on 17th July.

Under the plans, over the next five years, 12 smaller “community hubs” providing library, community centres and youth services would be created, along with three larger community service hubs.  These would be based in Heath Town, Bilston and Warstones and would provide the same service, alongside childrens’ social care, and family support services.

some excellent reports below, plus some from the council: