100 people attended the meeting held in the Britannia Hotel Wolverhampton. The meeting also heard from Vince Butler one of the employees from HMRC who face losing their job, if they do not accept a transfer to another site.

Staff at HMRC in Wolverhampton have collectively agreed to oppose the closure have said, “We fight this closure not just for our jobs but because these jobs will be lost from Wolverhampton forever.”

Staff at HMRC were told in 2016 that their office will likely be closed by 2019, over 300 staff (2/3 of these being women) were told that if they do not except a transfer to Birmingham, then they will lose their jobs. Recently Coventry City Council in a full council meeting united (Labour and Conservatives) to oppose the HMRC closure there. Wolverhampton Council leader, Roger Lawrence has already stated his opposition to the closure and has persuaded business leaders from Wolverhampton to oppose the closure. Black Country Chamber of Commerce defined the offices of HMRC, being, ”critical” to Wolverhampton.

Andrew Lloyd, PCS Regional secretary said, “We cannot allow this closure to happen, it makes no sense to have a Tax system that is purely based in Birmingham. A Birmingham centric region will be bad news for Wolverhampton, not just for lost jobs, and services, but because of the economic impact on this city, that will run into millions being lost.”

The public meeting will also discuss the public sector pay freeze and consider the impact of the Chancellors Spring statement expected today (13.03.2018).

Frank Keogh, Unite Regional official commented, “If the Chancellor refuses to scrap the pay cap on the public sector then there will inevitably be a massive reaction from union members. It may well mean mass industrial action if our members continue to feel undervalued.”

Eleanor Smith, MP has said, “I will fight for my constituents to have a decent standard of living. It cannot be right that we tolerate a situation that means children of public servants are put into poverty. 45,000 children in the West Midlands are defined as being in poverty because their parents are poorly paid public sector workers.” 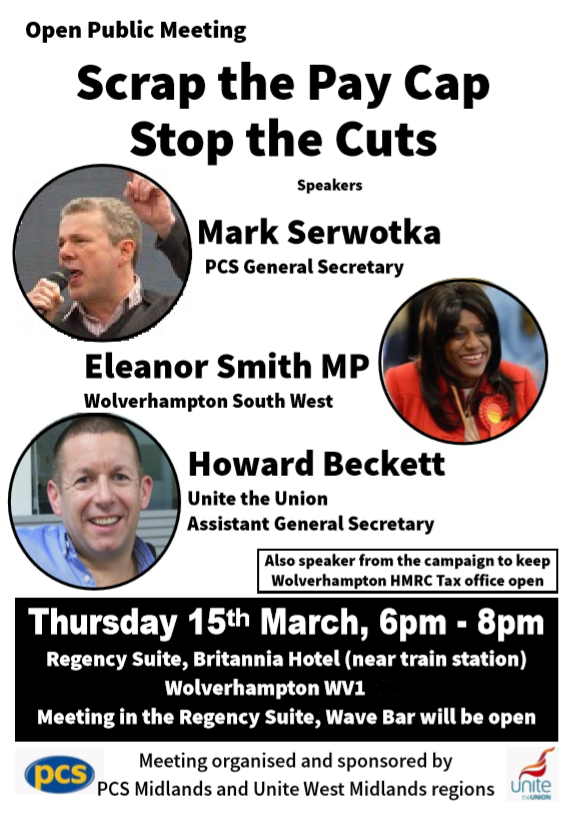