Midlands TUC has been working with bus unions and the TUC Pensioners Network over recent months around campaigning for better buses.

This has led to us producing our bus activist campaign pack. https://www.tuc.org.uk/sites/default/files/2021-05/Bus%20Activist%20campaign%20pack_0.pdf 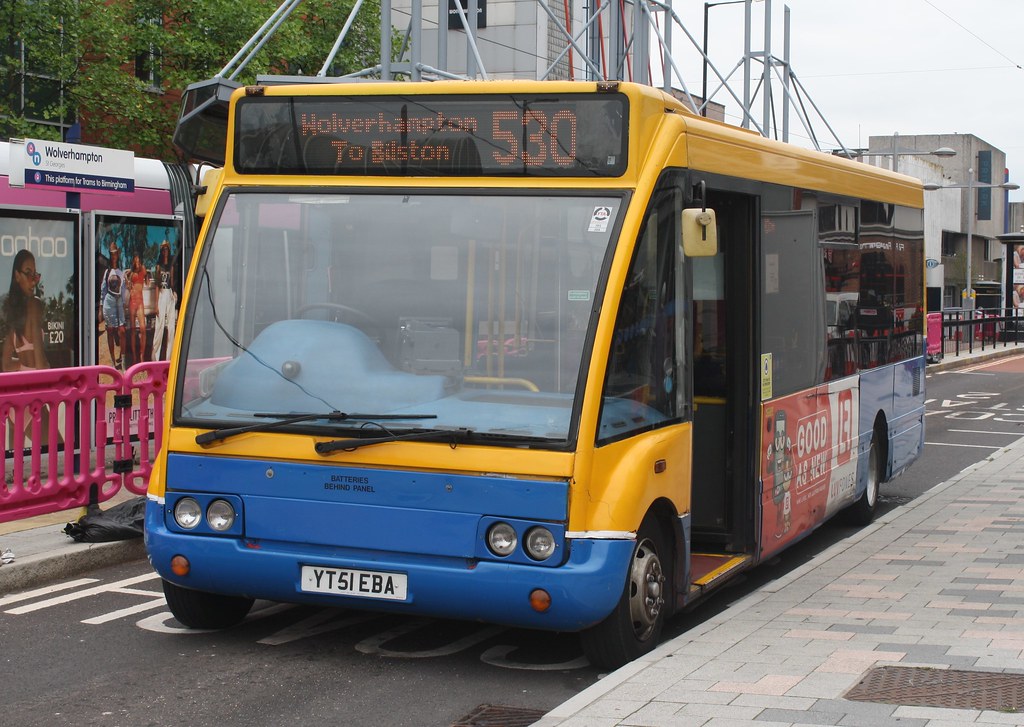 Public control is the norm around Europe. The UK is a notable exception for its extreme position of bus deregulation, allowing private operators to set their own fares, routes and standards.
The pack https://www.tuc.org.uk/sites/default/files/2021-05/Bus%20Activist%20campaign%20pack_0.pdf gives some suggestions for local campaigners how to go about building support for franchising etc. The pack explains the short-term solution of Enhanced Partnerships e.g. trading new bus lanes for increased routes with bus companies.

Trades councils can play a crucial lead in building sustainable local coalitions and putting greater regulation of the bus services on local authority agendas – “what’s good enough for London is good enough for us”.

The former UN special rapporteur Philip Alston has produced a damning report on the effect of bus privatisation in the UK on poverty.  It is being published on 20th July.

The national meeting to launch the report was on July 21st 2021. 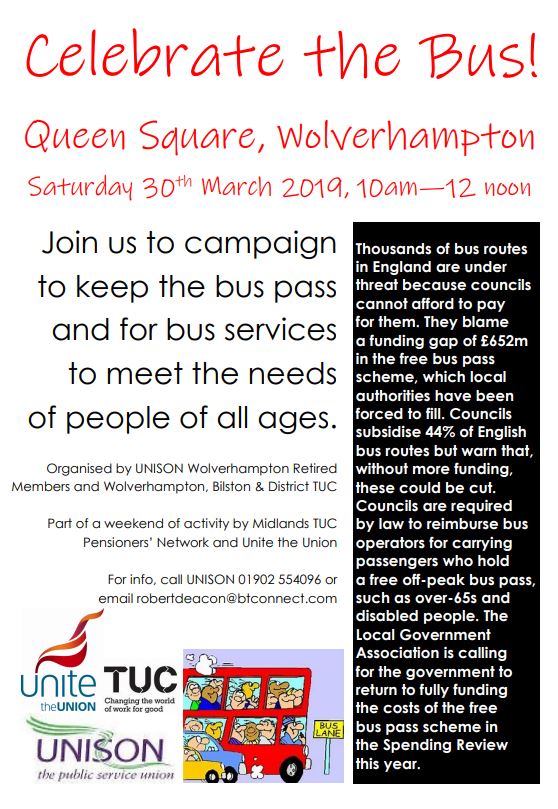 Celebrate the Bus 2019 – UNITE nationally have agreed to promote the ‘Celebrate the Pass’ days of action around their networks and encourage branches/activists to set up their own campaign actions. A rebrand of materials will be produced with UNITE. The aim will be along the lines of ‘Action for Rail’ with activity taking place across the country. 28-30 March

But a bus pass is no use unless there are some buses. England saw 500 bus routes withdrawn or reduced in 2016/17. English councils have cut funding for buses by a third since 2010.

TUC Midlands Pensioners’ Network celebrated this anniversary with a tour of the Midlands by bus from 7th  to 21st April using public transport.. The tour went from Hereford to Skegness.

“Everywhere we go, we’ll campaign to keep the bus pass as a universal non-means-tested benefit and for bus services that meet people’s needs.”

Wolverhampton’s day was 11th April with TUC Pensioners Network along with some Wolves TUC delegates collected postcards filled in by passers-by to their MPs.

The tour has three main asks:
 Protect the pass.
 Invest and expand bus services.
 Defend the workforce.
The bus pass is an important benefit that brings financial, health and social benefits to both older and disabled people.

It also benefits wider society by helping to keep bus services viable, reducing congestion and helping people to access work.
Nearly two thirds of jobseekers don’t have a car.
And yet the bus is under threat. According to the Campaign for Better Transport, 500 bus routes were cut or withdrawn in 2016/17. Funding for buses has reduced by a third since 2010.

April 2018 will see the 10th Anniversary of the

The pass brings financial, health and social benefits to older and disabled people.

It brings environmental, economic and social benefits to the community as a whole, since it helps keep buses viable and reduces parking and congestion.  64% of job seekers do not have a car they could use for work!

Buses are an increasingly neglected public service. Other forms of transport gobble up all the investment. According to answers to Freedom of Information requests from the Campaign for Better Transport another 500 bus routes were cut or withdrawn in 2016/17. Funding for buses has reduced by a third since 2010.

To mark the Anniversary, working with the TUC, The Midlands TUC Pensioners Network plans a celebration bus tour of the Midlands over the fortnight 7th to 20th April 2018

Everywhere we go we will campaign among the general public to keep the bus pass as a universal non-means tested benefit and for a bus service that meets people`s needs.