Sunday 14 November  Wednesfield North ward  UNISON and UNITTE helpers meant a total of 5,000 leaflets were delivered to homes this weekend

Saturday 13 November  targeted areas of Bushbury North, Oxley, Bilston East and Coseley East wards were leafleted with the Hope Not Hate Remembrance Day leaflet and our Fight the Cuts leaflet. PCS, UCU, UNISON and UNITE members turned out. 70% of our leafleters out today were women. 3,500 leaflets out today.

October 2010 Kick Racism Out of Football 3,600 leaflets handed out by 2 dozen volunteers in 45 minutes. CLICK HERE

July 2010 – Bilston North by-election – the fascist Bnp are trounced as their voters of two months before abandoned them.

The fascists received the lowest number of votes in any council ward they have EVER contested in the local council.

Local elections, May 6th 2010 – our 3-week 2010 election campaign – we delivered our anti-bnp message to 16,000 homes in the wards where the fascists stood. We maintained our 100% record of campaigning each time they stand. we remain undefeated as they struck up another 5 dismal election defeats!

we delivered primarily our own locally produced ward-specific literature, see below: 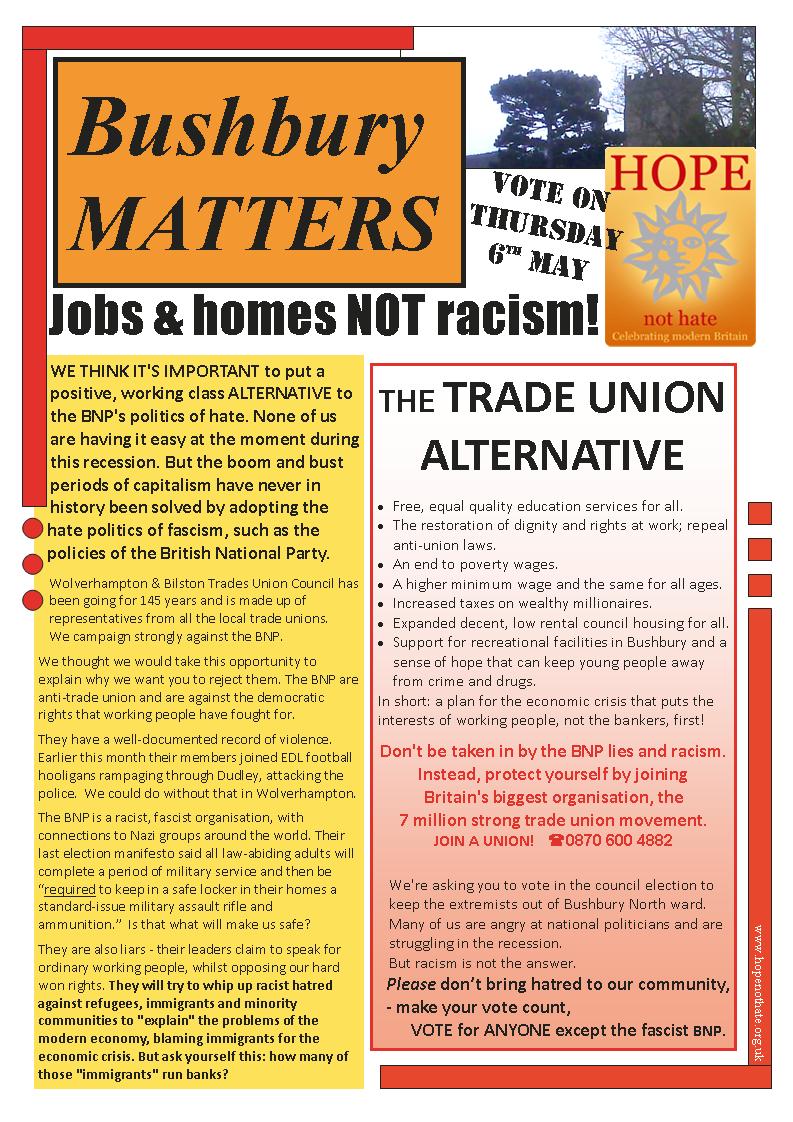 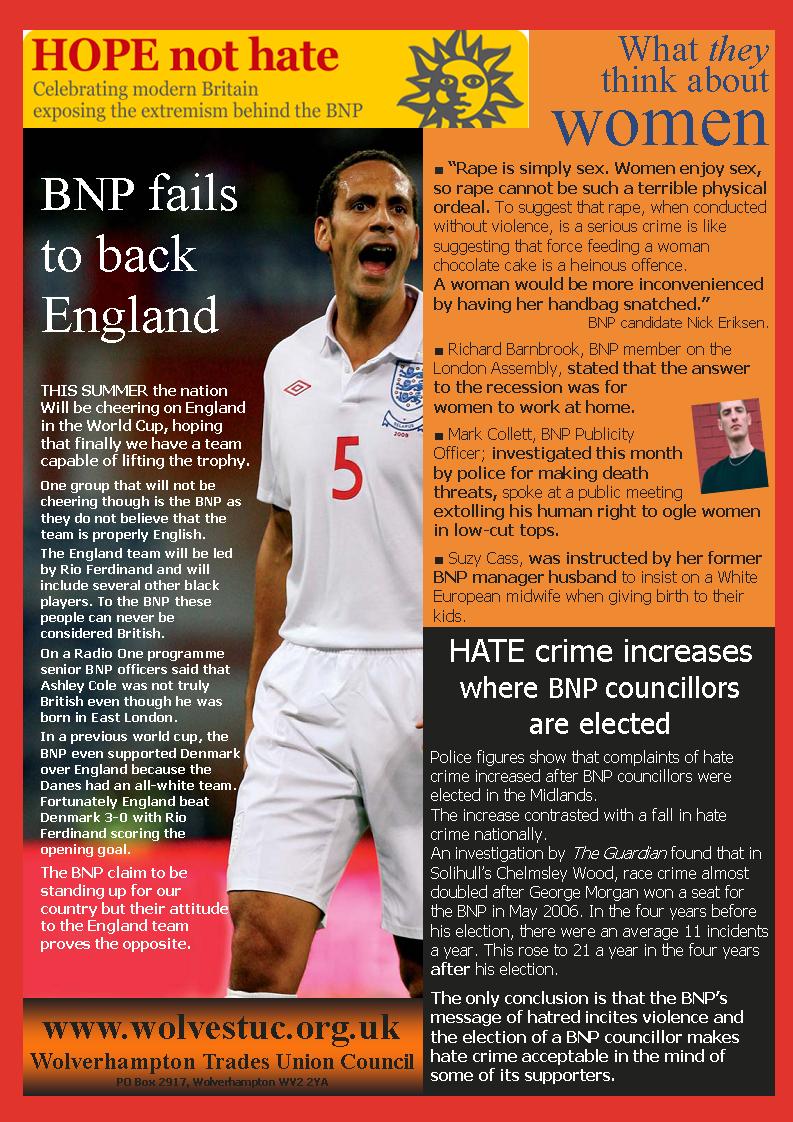 WB&DTUC urges you to register to vote  if you are not already or ring the local election office 01902 551177 – too late for these elections now though but register now and be ready for next time
2010 – what's been done this year:
Thurs 6th May council & general elections – vote to stop any fascist candidates
Sun. 2nd May  leafleting finished. 16,000 homes plus another 2,000 in Stoke by our volunteers.
Sat. 1st  May a contingent went up to Stoke to help out during the day with their campaign and back in time for the Wolverhampton Workers’ Day  anti-fascist theme
Friday 30th April Tettenhall Wightwick leafleting
Tuesday 28th April  Bushbury – finishing off last bits
Union Monday 26th April leafleting of 1600 Whitmore Reans homes for the anti-fascist 1st May event
Sun 25th April just over an hour's work by a good turnout of volunteers now two thirds complete
Sat. 24th April got Bushbury leaflet off to a good start completing almost 40% of ward in 90 minutes – over 10,000 homes delivered to with our anti-fascist message in a fortnight
Fri 23rd last bits of East Park being done, ran out as were begged for a quantity to take to the local Gudwara, whilst delivering.
Thurs 22nd 80% ward now complete
Tues 20th April Bilston N good turnout over half ward done
Sun.18th April leafleting of Bilston N began, 1600 (over 30%) homes covered
Sat. 17th April- huge regional mobilisation to help their priority campaign – the  HNH coach to take us to Stoke was overfull and some of us had to follow on by train.
Thurs 15th April 7.15pm Wolves TUC meeting  discussion of campaign
13 -15th April leafleting of East Park ward near completion now
Sunday 11th April kicked off the campaign with 25% of homes in East Park ward leafleted 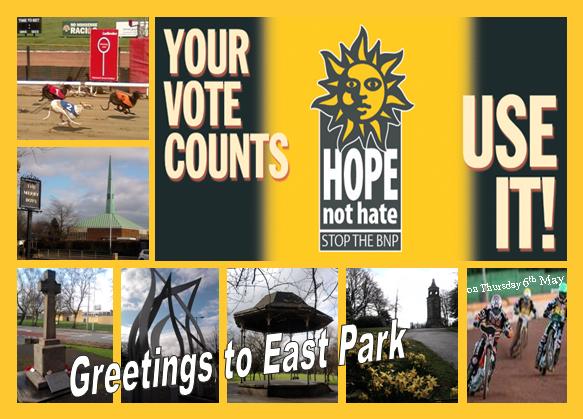 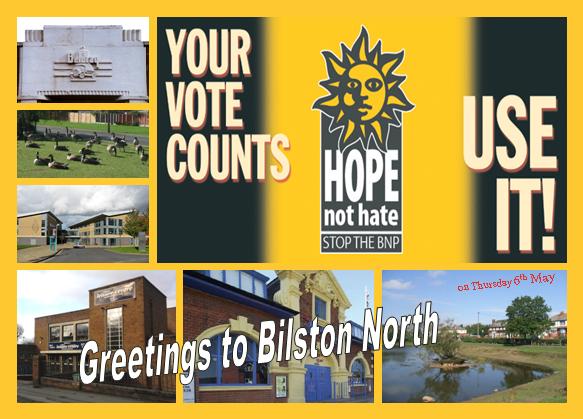 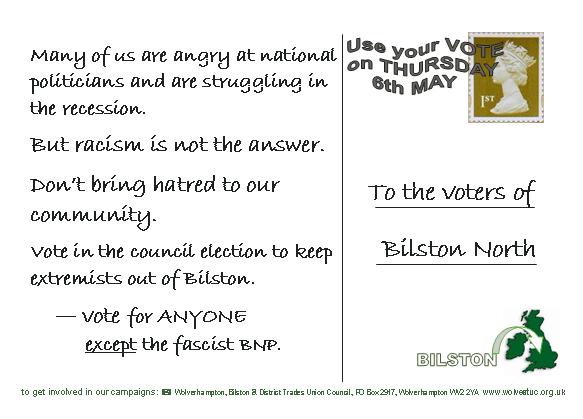 Wednesfield North was fully leafleted on the Weekend of Action 27/28th March – a magnificent turnout 23 people volunteered this weekend:
Sun 28th March the remaining 1,400 homes in the Wednesfield north ward were leafleted and in the pub by midday Sunday.
Sat 27th March – 3,400 homes leafleted on the first day of our latest Weekend of Action a magnificent effort by our volunteers, just 1,400 left for Sunday.