Behind the Violence in Venezuela

A Brief Summary – by Carlos Herrera

The recent protests in Venezuela that started on February 12 have been protrtayed as being nationwide protests by students in the corporate media. Nothing could be further from the truth.

Protests, barricades, fire bombs, assassinations and violence took place in 18 out of 335 municipalities nationwide. Detainees are 183 with just 18 being bona fide students.

The background – goes back to November 2012 when an economic war started against the country. Forced devaluation of the local currency; hige price speculation on goods of over 1000%; engineered shortages of basic subsidized staples such as milk, corn flour, chicken, toilet rolls to provoke the population into blaming the government. It has been proven that hoarding of products by unscrupulous distributors and smuggling of huge amounts of food to neighbouring Colombia area causing the shortages.

This economic war has been continuing for 18 months and was complemented by the violent protests on February 12 when the Attorney Generals Building was attacked. The violence continued for three months and the interesting point is that the incidents took place in municipalities run mainly by the fascist opposition party Voluntad Popular.

The aim is to cause chaos and have it portrayed as a nationwide phenomenon, force the resignation of President Maduro or “Syrianise” or “Ucarinize” Venezuela so as to spark a civil war or invasion by the US. In the meanwhile there is strong evidence that Colombian paramilitaries are also participating in the violence especially in the border state of Tachira.

The methods used by the supposed “students” is to block the roads with burning barricades making life impossible for the local population. When the security forces clear the barricades there have been incidents where snipers have shot national guard and policemen in the street from high buildings.

In some municipalities the local mayors were cooperating in the violence and even walls were built across the street with the local police turning a blind eye to such criminality which is forbidden in Article 50 of the Constitution.

There is no problem with demonstrations and protests in Venezuela as this is guaranteed by Article 68 of the Constitution but the protests have been anything but peaceful. Caches of arms, drugs, explosives, nail bombs, rifles, Molotov cocktails have been found as the “protesters” always turned up around 4pm to start their daily work.

The emails which were given in evidence by the government (Mayor Rodriguez of Caracas) last week prove conclusively that the protests were orchestrated and financed from the beginning and were not spontaneous. No coherent demands were ever presented.

For example – apparently the protests were due to food shortages but the paid vandals then started burning articulated lorries of food; ministries were firebombed; police vehicles burned; over 100 buses attacked; tube stations attacked; buses with passengers stoned; threats to burn people alive and other terrorist acts.

The whole situation has been one of terrorism and not protests. The aim is clearly to overthrow the government so that the USA can get its hands on the world’s biggest oil reserves.

Much has been made of “repression” by the authorities in the media so as to discredit the government and security forces. But only crowd control measures that are internationally approved are used – tear gas, water cannon and plastic bullets. Any security personnel discovered mistreating detainees have been charged and are awaiting investigation and trial.

President Maduro called for a peace conference but it took the opposition some two and one half months to attend and in the meantime some 42 people lost their lives – some were beheaded by wires stretched across the road to stop motorcyclists.

This is a clear attempt at a coup in Venezuela and the latest emails presented last week indicate that there is also a plan to assassinate the President and spark a civil war.

Latest polls show that 88% of the population is against the violence being propagated by a small fascist minority in the face of the latter being incapable of winning democratic elections in the last 15 years.

Of 19 electoral processes the opposition won once in December 2007 and so has opted for non democratic ways of taking power in Venezuela.

Longer term this will have negative effects on the population and economy which does not matter as the vultures are waiting to swoop and pick up the pieces left over. 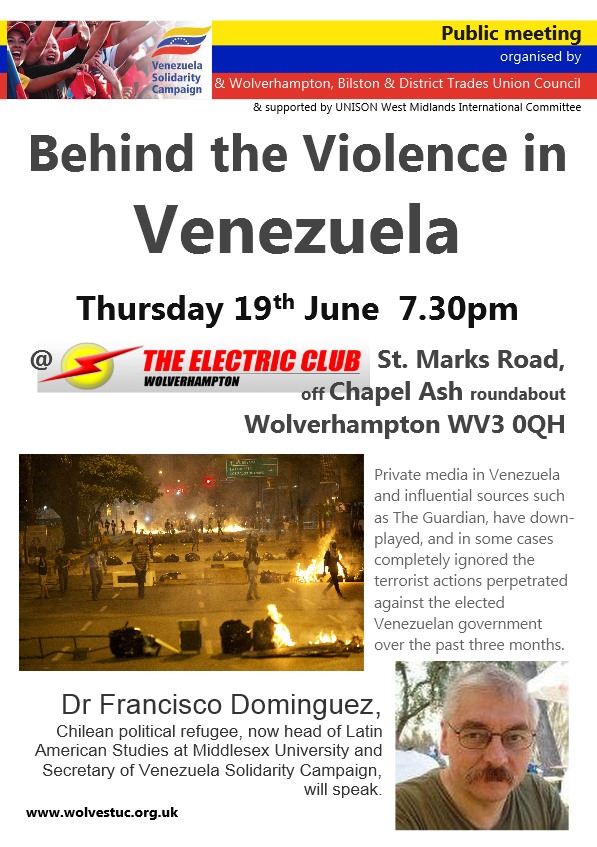 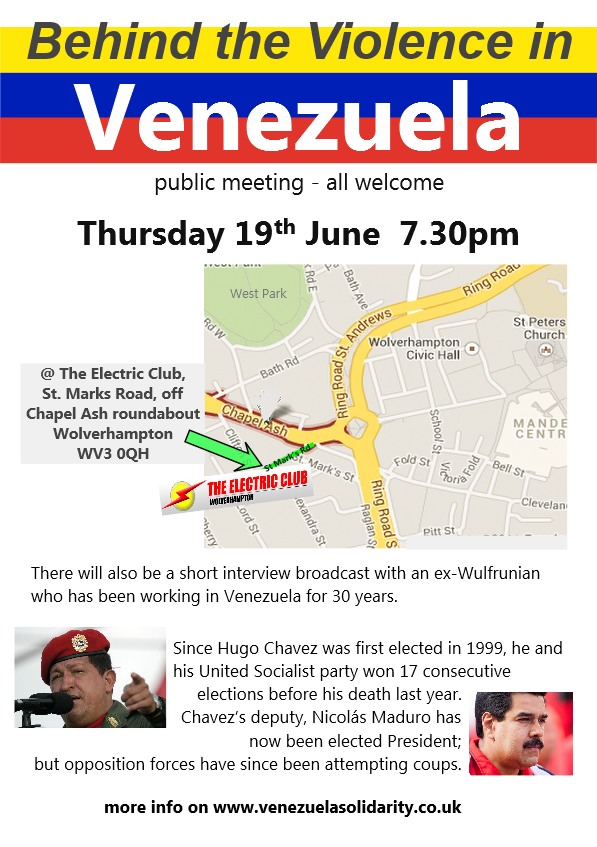