What are Trades Union Councils and how do we fit into the democratic structure of the labour movement?

Trades Union Councils exist in all major towns as well as in rural areas across Britain.

(3rd Thursday each month 7.15pm, UNITE office Wolverhampton for us)

We discuss issues of joint concern to the local labour movement and make democratic decisions to organise events and campaigns which bring the message of trade unionism to the wider public.

We promote the policies and campaigns of the Trades Union Congress but are not their local representatives.

To explain the democratic structures:

It’s annual conference delegates decide the policies of the combined trade union movement; they are elected directly from those unions.

There are regional structures such as the Midlands Trades Union Congress which meet quarterly with an executive.

It has three staff and it’s delegates are from the regional trade union bodies (which are in turn delegates from local branches) and also delegates representing trade union councils.

Midlands TUC organises regional events such as that over pensions and the Birmingham March for the Alternative and Cradley Chainmakers’ festival.

It’s staff and office costs are funded nationally but it has no budget and must raise funds regionally for any events.  A funding levy is operated by other regional TUCs to help them campaign but it has not yet been established here.

It is here where ordinary trade unionists are able to get involved in campaigning.

We are funded by affiliations, local fundraising by appeals and by volunteer festival bar teams. We get just £300 annually from the TUC. We have no paid officers and pay no form of honoraria; all our work is by volunteers in our own and not in facility time. 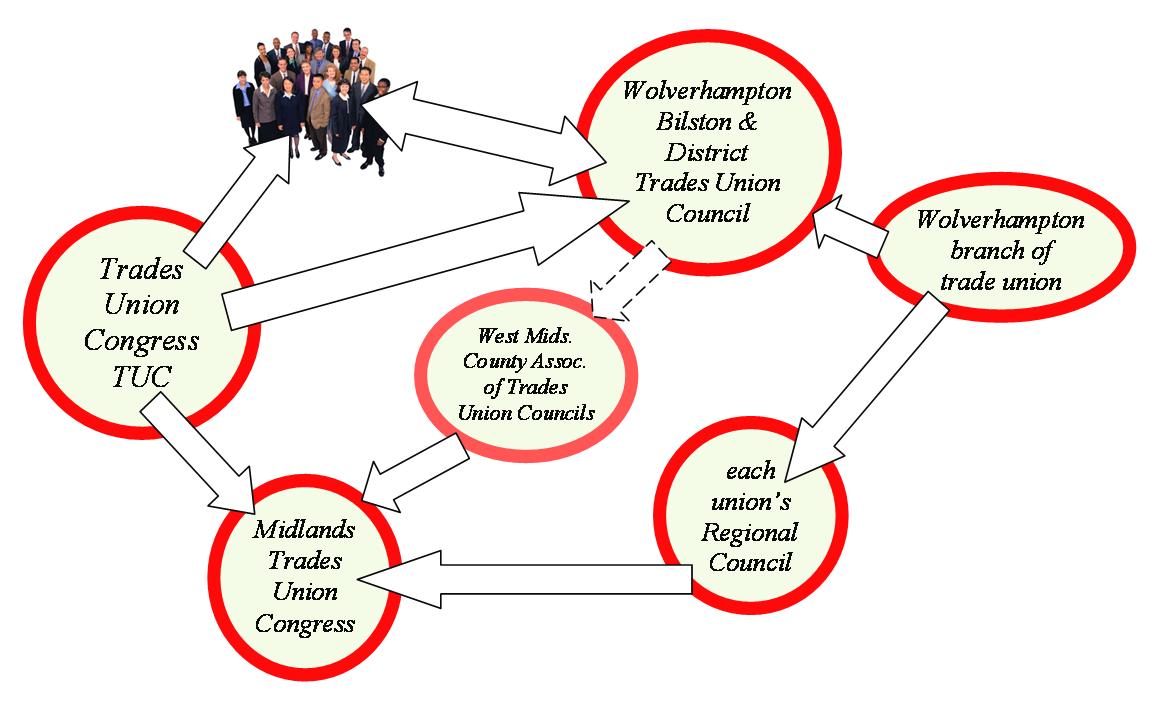 Delegates elected by trade union branches which meet or  have members working or living within the area meet as Trades Union Councils.

Delegates elect officers from amongst themselves to represent the views and priorities of the constituent branches and to take responsibility for working for and supporting the policy of Congress and the TUC General Council. This is because trades union councils are registered with the TUC, rather than being entirely independent bodies.
The Annual Conference of Trades Union Councils takes place over a May/June weekend.