In this excellent BBC round up correspondent Mary Jane Baxter reports on 2010 May Day demonstrations around the world including 2 million on the march in Russia.

Saturday 1st May 2010 WOLVERHAMPTON 16th Workers’ Day free festival was held in the Pegasus Pub in Whitmore Reans, the diverse area we annually hold the event. 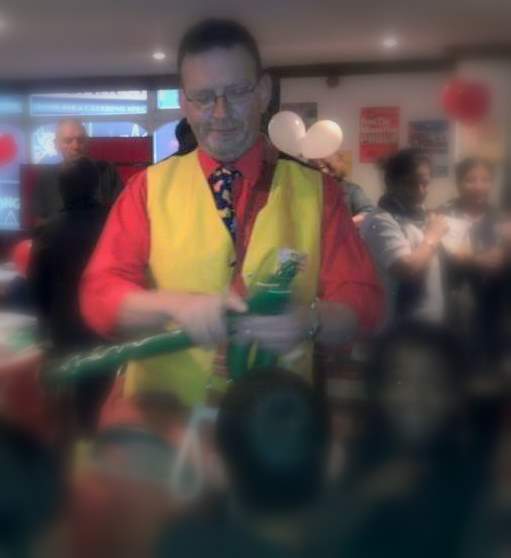 Steve the Magic Bloke, made balloons and entertained kids & adults alike. His love of Comedy and innate ability to make people laugh culminated in 1989 with him working as a comedian on the Comedy Club circuit during which Steve’s childhood love of Magic was rekindled when working with Magicians such as John Lenahan and Ian Keeble Magic started to creep into the act and in 1992 he joined the Wolverhampton Circle of Magicians (WCM). He accepted the invitation to “do some magic” at a friend’s child’s birthday party the following year and it wasn’t long (with the help of Ron Ropple, fellow WCM member and UK Children’s Entertainer of the Year) before he was working locally in Wolverhampton as a children’s Entertainer. In the mid 1990’s Steve won the WCM’s close-up magic competition three times in succession (the only time in the club’s 60 year history that had been achieved) and from that success he started to get corporate work as a close-up Magician. Working at Cadbury World (in Birmingham) as a family entertainer he struck up a friendship with Malcolm Mallen one of the country’s top balloon modellers and it wasn’t long before large multiple balloon sculptures were featuring in his shows. In 2006 he embarked on a secondary career as event manager at the Civic Halls in Wolverhampton and as ran events as diverse as Squeeze, Jimmy Carr, and Brainiac. So if you take all of these separate disciplines and fit them together like pieces in a jigsaw you get “Steve the Magicbloke who also does balloons!”

7-10pm Azaad Dhol Group – see their recent perfomances was created following the earlier success of the Punjabi pop band 'Azaad'. Harjit Singh, founder of the Dhol Group, was a professional drummer for the acclaimed pop band. After the group split in the early 90's Harjit decided to share his musical talent through teaching. He, therefore, carried the band's name, meaning 'freedom', by forming the Azaad Dhol Group. 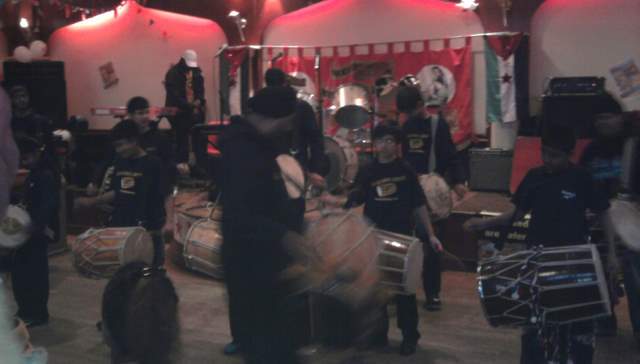 Today the Azaad Dhol Group are a proffessional outfit who combine education and performance in order to keep traditional Punjabi Folk Music alive and kicking! The group have performed at events throughout the UK and include prestigious venue's such as The Royal Albert Hall & NEC. Their address: PO Box 3969, Wolverhampton Wv2 4ZA

7-30pm Jockey Morris Men of Birmingham have been active in Birmingham since their formation in 1949. They have performed all over the country and have been proud to represent morris dancing and the City of Birmingham in places as far flung as Warwickshire, France, Flanders, Holland and Germany 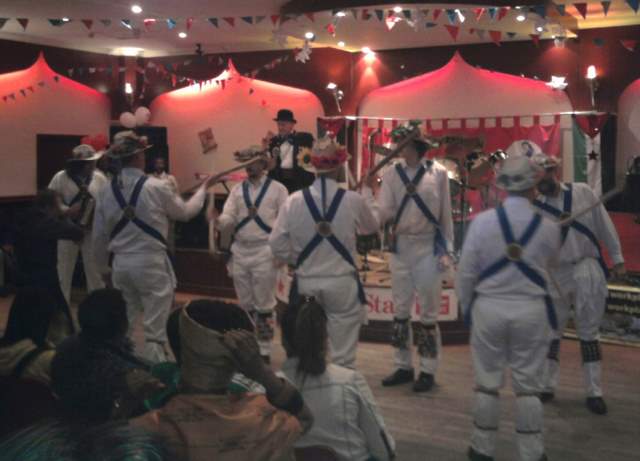 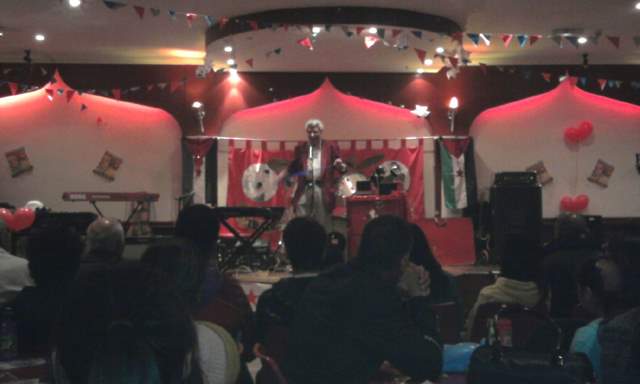 8.10pm Ian Saville – Socialist Magician  www.redmagic.co.uk  For more than 25 years, Ian Saville has been presenting his Marxist Magic and ventriloquism.  Whereas David Copperfield is content with little tricks like making the Statue of Liberty disappear, Ian Saville aims at the much more ambitious goal of making International Capitalism and exploitation disappear. True, he hasn't quite succeeded, but recent developments are encouraging. The act is funny, magical, thought-provoking and topical. It is a celebration of Socialism.
The act is suitable for all sorts of events and venues. It can last for anything from 15 minutes to an hour, and needs few facilities. If you are organising a social, a celebration, a training event or a public meeting, get in touch to see if Ian can add his magic.
As well as the Cabaret Act, Ian has presented full-length shows – Brecht on Magic, Getting Nowhere – Again and Left Luggage. With singer Leon Rosselson he presented Look at it This Way. And he does shows for children (though Karl Marx and Bertolt Brecht don't feature in those).
Awards won by Ian Saville include The Brighton Fringe Review Award, The Tapwater Award (a more acceptable alternative to the Perrier) and a Time Out Theatre Award. See what the critics have said in the reviews.
Ian Saville has performed socialist magic on picket lines, at benefits, and at many labour movement events, conferences and meetings, to audiences all over the UK, and overseas.
He's also performed in comedy clubs, theatres (including the National Theatre), arts centres, Performance Art events, universities and the Albert Hall. watch his act 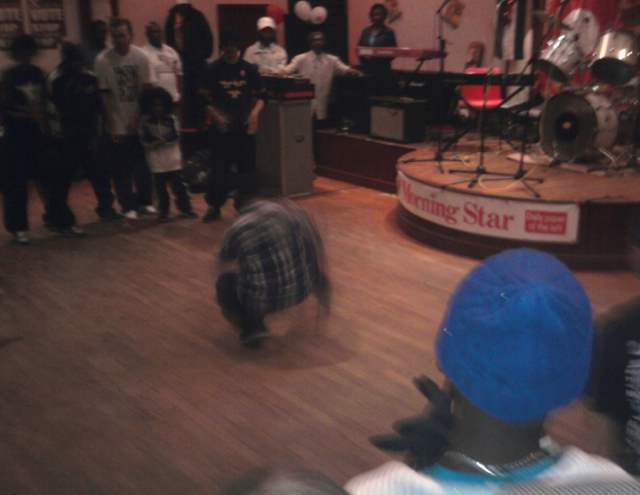 Hip Hop Expressive Arts Organisation driven to promote the positive side of Hip Hop Culture & its Arts. As a collective they have big aspirations to building a positive future for there community through the means of entertainment & education. At current TT is made up of a committee, Keith Fraser who is the chairman, Darren Fairclough Treasurer and Carol Nedrick Secretary. Money B is the main B-boy tutor alongside Dale, Sunny B, Jovan & Sketch that helps as facilitators. The crew get a lot of support from the families that attend the classes, trainee crew performers & old school breakers from Wolverhampton especially Hanifa Queen UK 1st B-Girl (Previously known as B-Girl Bubbles). The crew officially started up in the year 2006 with the aid of the Wolverhampton small grant scheme. Unofficially we have been about since 2004 (that is when we started the classes at Newhampton Arts Centre) TT are actively seeking new crew members that would like to represent Wolverhampton in B-Boying / B-Girling in the UK and Worldwide. This Athletes Art Form is very demanding and we train almost every day, so only the strong and passionate need only apply. If you would like to contact us email us on transit_trix_mail@yahoo.co.uk Where did the name come from? Back in summer 2005 the core members at the time were trying to think of a name that represented the different styles, culture and arts that where in the dance crew, but also needed to express a positive movement. So the name transitional trix was shortened to transit trix. Transitional meaning the act of passing from one state or place to the next. We are a crew that never stands still but always moves forward to reaching our goals. We look forward to the future development and preservation of the arts and culture of Hip Hop.

followed by singing of Internationale led by Nick Kelleher of the May day committee and will not be appearing on X-Factor anytime soon! 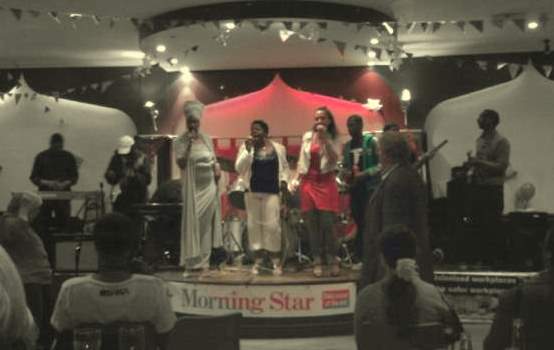 Tru-Fam Live are an already popular band formed under the umbrella of the Wolverhampton-based Tru-Fam Record label 18 months ago.

The main act of 2010 Tru-Fam Live shows, Syrona Ma’rie, has recently released an album  'This Is Reality' – her Jamaica Album Project in collaboration with 'Bunda Beat' (Rudi'Bunny'Nelson & Darees'Daz'Nelson), Tru-Fam Record Artist Derrick'Dezert Rhino'Buchanan and infamous Bongo Herman. Syrona's excellent track 'Up To You',  released as a single,  received constant airplay on Irie FM, Hot 107, RJR as well as many other Radio/ TV stations through out Jamaica.

As a collective the band, together with the artists can boast a talent to express Reggae, Soul, R’n’B and Jazz . All are professional musicians, with experience playing in different bands for many years. They have played at festivals in various countries including Belgium, Holland, Germany and Canada.

In the coming months they are completing a increasingly busy UK Tour and have planned to tour Europe as well as the far East, playing out at Festivals, further building there ever-growing profile.

UK Rising Star Syrona Ma'rie released her debut album 'This is Reality' in June 2009. Released on Tru-Fam Records and available world wide for digital download from all the largest online stores including iTunes, Amazon and many more.  Her single Runnin' Away

See the May day poster by clicking here