The Housing Bill passed in parliament on 12th May.  It will not come into effect before April 2017: there are still lots of ways to challenge and fight it, spelt out in the Kill the Housing Bill statement below

FIGHT IS ON AGAINST THE HOUSING AND PLANNING BILL:

The passing of the Housing and Planning Bill (the Bill) is distressing for many and should anger all who are concerned about housing in Britain. Government has again shown its arrogance, refusing to listen to the well reasoned arguments of tenant, housing and homeless groups, local authorities, academics, trade unions, faith leaders and community organisations, as well as Peers and MPs.

Government has ignored the millions of people directly threatened by the Bill, warning that it spells disaster for the future of housing and sustainable communities. The parliamentary process has failed to safeguard the interests of working class people, of the majority of British people who know we already have a housing crisis, of those already homeless, of Gypsy Travellers, of people fearing the Pay to Stay tax, and everyone trapped in expensive private renting, and struggling for a stable home they can afford.  Instead Parliament has passed legislation that will make the housing crisis worse. For us this is not the end but the beginning of building a serious mass movement to stop these attacks on tenants and housing rights.

On 13th March, 10,000 people demonstrated in central London against the Bill and for secure homes and rent control for all. On 3rd May, 200 people, from at least 25 local authority areas, protested inside and outside parliament, with the support of the leader of the Labour Party, the Green Party, trade union representatives and council, housing association and private sector tenants and organisations. This is the start of a powerful alliance that will continue to grow. Huge meetings opposing the Bill have already been held in several London boroughs and similar campaigns are developing across the country.

We are determined to fight and defeat this Bill. We will:

The Housing Bill is the most comprehensive attempt to transfer public assets to the private sector of recent decades, writes Brian Rye Acting General Secretary UCATT, the construction union.

“We are one step away from the concerted eradication of social housing in Britain. The Tories’ Housing Bill will accelerate a policy, started under the coalition government, to irrevocably change the social fabric of this country forever.” Read full article…….

Kill the Housing Bill briefing by the campaign

Wolverhampton Federation of Tenants Associations spoke at our meeting in March

Conference notes that (after amendments by the House of Lords yet to be debated by the Commons) the government’s Housing and Planning Bill will:

Conference further notes that the Tory government has also:

Conference welcomes the formation of the Kill the Housing Bill coalition. It congratulates the coalition on the success of its lobbies of parliament on 2nd February and 3rd May and its national demonstration on 13th March.

Conference urges Trades Union Councils in the Midlands to consider inviting speakers about the Bill and circulating Kill the Bill material to their delegates and affiliates and to seek ways to work with local tenants’ groups and relevant unions in their localities to campaign against the bill, lobby local Members of Parliament to oppose it and continue to work jointly in future on campaigns to reverse the legislation and to sustain council housing and social housing.

Conference urges the Regional Executive Committee to support and publicise such local campaigns.

Write to your MP – Kill the Housing Bill
Ask your MP to oppose the Housing and Planning Bill: model letter here, and find MPs details here.
Copy to Labour shadow housing minister john.healey.MP@parliament.uk And to Housing Minister Brandon Lewis MP helen.hill@parliament.uk or brandon.lewis@communities.gsi.gov.uk, Twitter:@brandonlewis.
Or you can write to them at House of Commons, London WC1A 0AA, or phone 020 7219 3000 and ask for their office.

Organise to beat the Housing Bill

3. Do street stalls and knock doors with petition and leaflets

4.Get in touch for speakers and help: info@defendcouncilhousing.org.uk 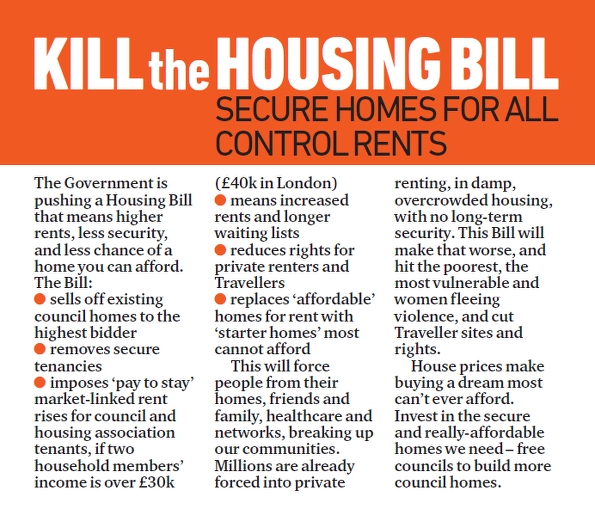