3,000 people marched for The Alternative – Birmingham , organised by Midlands TUC

Rage Against the Lib Dems!

Their conference (17-21 Sept) is in the ICC with the Lib Dem leaders hauled up in the Hyatt Hotel which is interconnected so that the won’t need to ever need to go outside. with prices starting at £349/night it seems a good waste of Lib Dem members’ subscriptions! 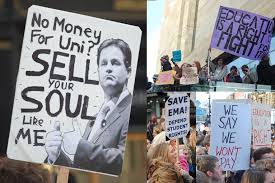