Austin met local firefighters and supporters  and pledged to do all he could to fight the Fire Authority’s plans to shut this much needed local service. (Aug08)

And he accused the Fire Authority of failing to consult local people properly, keeping the plans under wraps until after this year’s local elections and waiting until the end of July when people are going on holiday before announcing the proposal.

He said the planned closure would leave the Sedgley area without its own local fire cover and its appliance would be removed. Sedgley and the surrounding area would rely on the area being covered by Dudley and Tipton fire stations.

He’ll be working with local campaigners to launch a petition against the plans and has written to Fire Service chief Frank Sheehan demanding answers to a series of questions about the level of service, average response times and the time it would take fire engines from Tipton to reach a fire in Sedgley. He wants know how much money it takes to fund Sedgley fire station compared with its full time counterpart Tipton, as both stations operate one fire engine twenty four hours a day seven days a week. 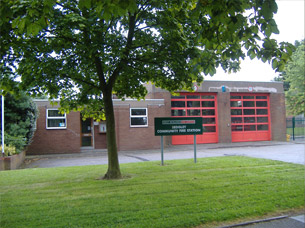 Sedgley fire station is the region’s only retained fire station and is believed to be the most cost effective in the area. The Government is calling for a national increase in the numbers of retained firemen as it allows for better cover and expansion of the fire service. Sedgley Fire Station was estimated to answer around 800 calls a year when fully operational.

“I am completely opposed to plans to close this fire station and reduce the level of cover provided for my constituents and I think the fire authority has failed to inform local people properly. They clearly kept the plans under wraps until after the local elections and unveiled them right at the end of July as local people are heading off on holiday.

“Sedgley fire station was answering around 800 calls a year, so I’m also worried about the effect on other parts of Dudley because the fire engine at Dudley would have to cover Sedgley as well as the rest of the town.

“We should be moving towards a position where we are encouraging the creation of more retained fire services, as the same funding will allow for a stronger and less stretched local fire service.”

Read the petition comments here and write your own once signed.

If you live in Sedgley, write to your Local Councillors – Get them to raise concerns in the local media and pledge to support the Fire station from closure.