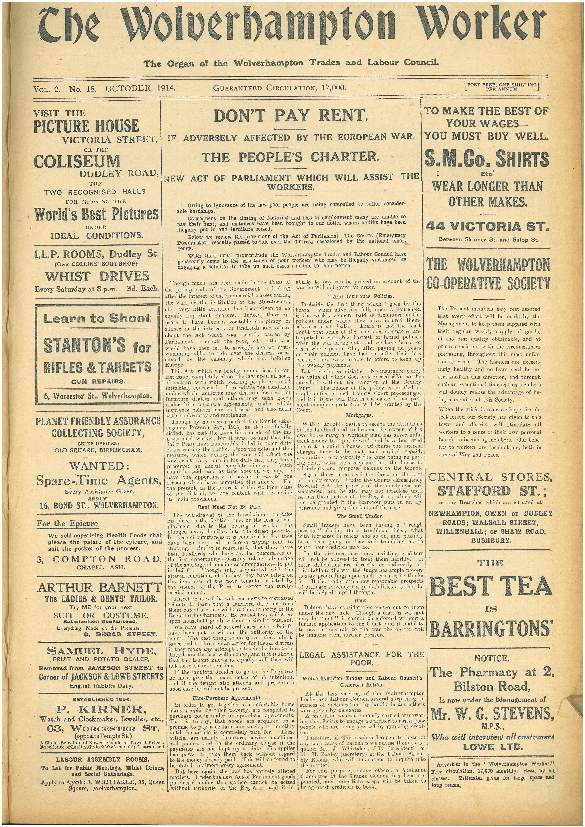 This new archive provides a unique and interesting portrait of the lives and struggles of working class people in Wolverhampton in the lead up and into the First World War.

The entire set of publications was purchased by Wolverhampton, Bilston & District Trades Union Council in October 2016 using some of the money raised by our volunteers at music festivals.

We have digitised it online so it is available to view for all. Thanks to Kim in the UNISON office for all help.

We intend to donate the documents to relevant archives.

There were 24 editions published. Click on link or page image to read each paper in full. 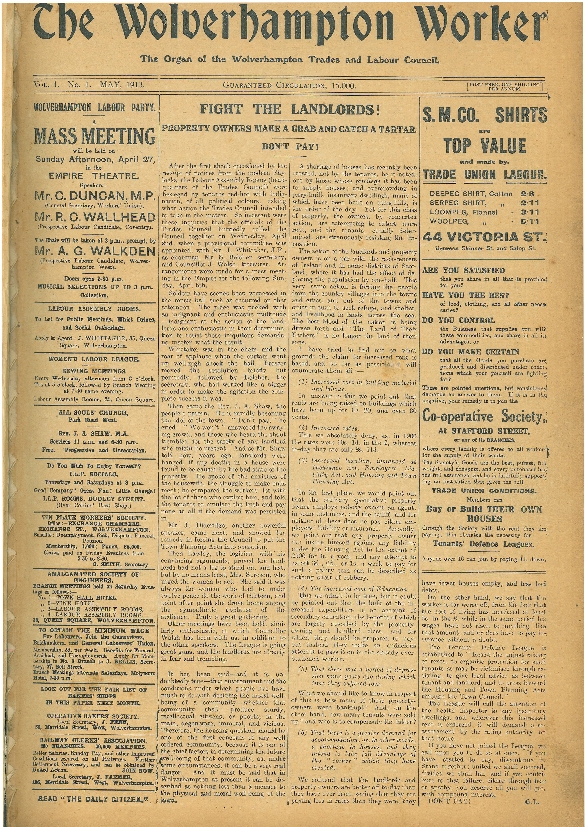 The first eight-page issue leads with “Fight the Landlords, Don’t Pay” reporting on a mass meeting of the Wolverhampton Trades and Labour Council which was besieged by tenants, demanding action (which was then taken). They were angry at private landlords who had sent out 9,000 notices of increases of rents.

The first Trade Union Mission Week was advertised with 36 outdoor meetings to be held in the May Day week.

It analyses the jobs of Town Council members, 3 Labour out of 48 total. One Tory councillor’s job was listed as “Manure Manufacturer”, still a popular Tory profession! 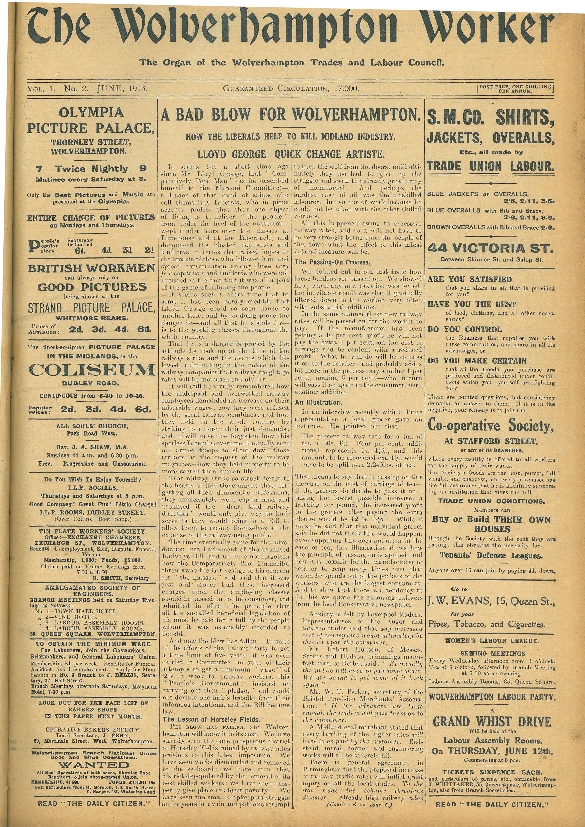 Welcome messages for the Wolverhampton Worker continue including one from Kier Hardie MP and Womens’ Labour League..

“Why I’m in the Labour Movement” by local vicar.

Analysis of jobs of MPs all 40 Labour MPs are ex-miners or other trades. The Liberals and Tories include an equivalent number of heirs to peerage in their ranks.

Between 1,000 and 1,500 workers in Wolverhampton joined their trades union after being recruited in previous month’s Trade Union Mission Week despite heavy rain all week at the outdoor meetings, over 30 were held to recruit trade unionists from the existing estimated low level of 5,000 trade unionists in the town.

Reports from Womens Labour League on their role in the union week and campaign  “against starvation and sweating conditions at the Works at Monmore Green”.

Reports from Labour Party and also on the local PSA, the Pleasant Sunday Afternoon movement. Cartoon of the tenants’ war.

Article explaining the minimum wage demand by corporation workers for 25 shillings and how “the two capitalist parties joined together to defeat Labour”. 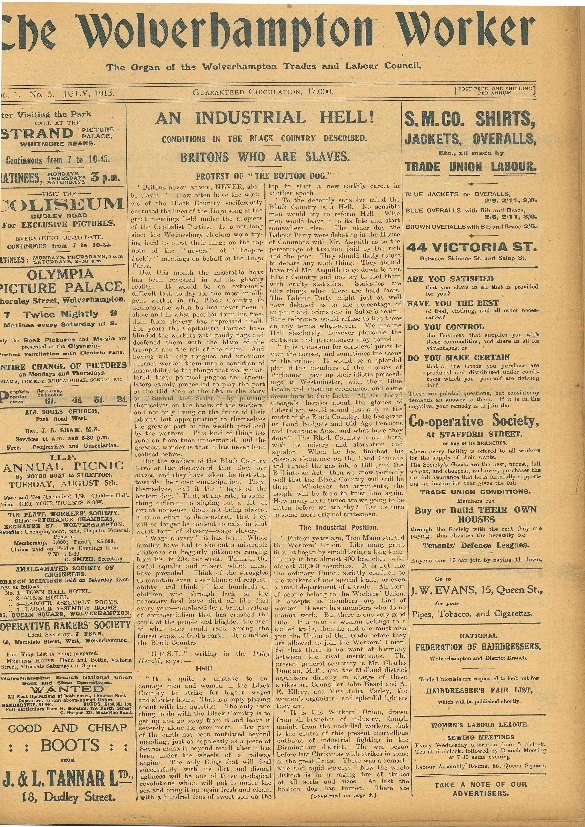 Denigrates politicians out of touch with the conditions of the Black Country.

Article on election fraud by ruling class using motor cars to cast up to 20 votes each. It calls for those eligible to register to vote, noting no women can vote still.

Another taking the Tories to task.

Gas Workers union resolution for the council to give part time employment to a pensioner who had worked 51 years for the Corporation starting at 10s and never earning more than 20s in his career who had never been able to afford to marry and now had 5 shillings/week pension to survive on.

The 3 Labour councillors were appointed to General Purposes Committee to discuss the minimum wage of 24s not the demanded 25s.

Success of Tenants’ Defence League in getting council to form a Housing Committee. Campaign against overcrowding.

Another Trade Union Mission Week to be held in September. 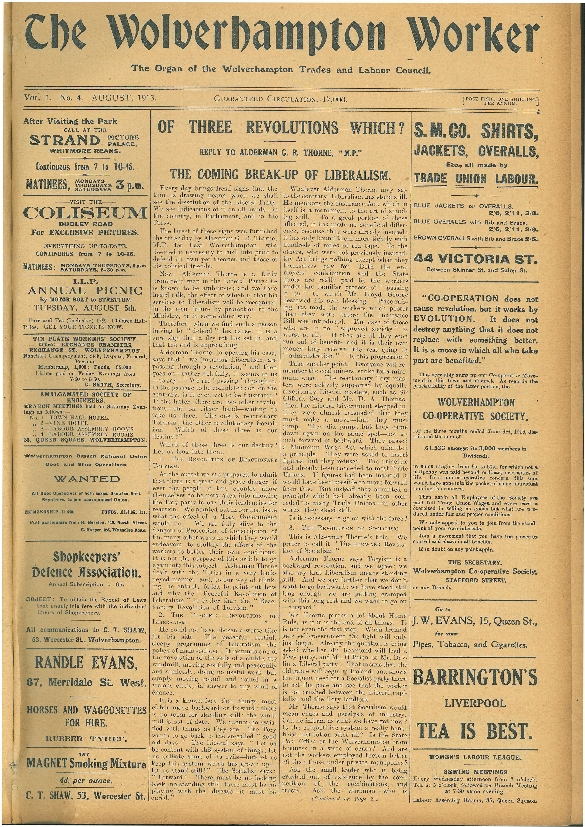 Leads with “Revolution of reactionary Toryism… Peaceful revolution of Liberalism…. Revolution of Socialism” and predicting the end of the Liberals, “it’s wealthiest men will go over to Toryism, and the more progressive minority will come into the Labour Party. Then the fight – the great fight of the future – will be between Labour and Capital, and everyone will have to decide, clearly and honestly, which side he means to defend.”

Article by vicar “relation of religion to the working-class movement”. Another on benefits of trade unionism.

Comedy attack on School Medical Officer who’d said “children attend school in a filthy and disreputable condition, and that poverty is not the cause of most of it”! 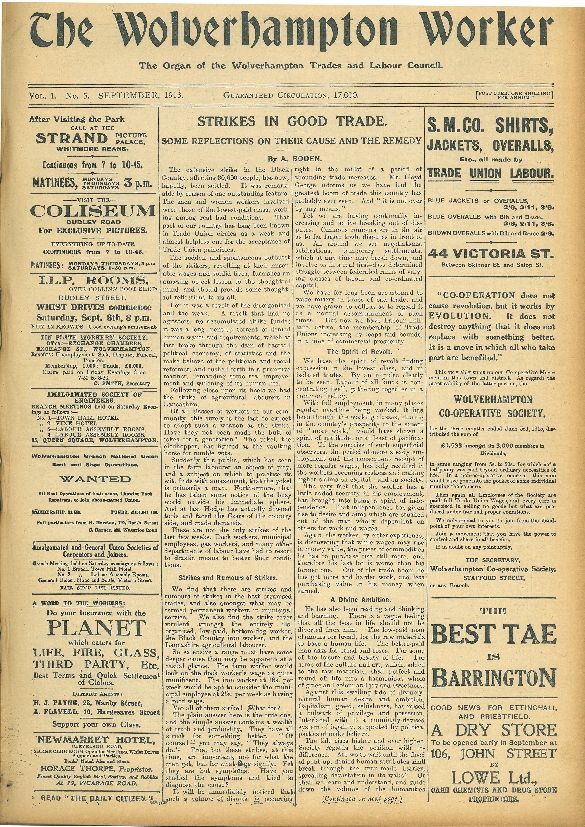 Settlement of strikes, 30,000 strong across Black Country. “The men and women workers involved were those of the lowest paid class, working amomg real bad conditions. That part of our country has long been known in Trade Union Circles as a weak and almost helpless one for the acceptance of Trades Union principles….it was the revolt of the  disorganised and the weak…which at last broke through the dam of bastard political economy, of statistics and the make believe of the politician and social reformer”.

42 open-air meetings listed for the second Trade Union and Labour Mission Week, up to 7 meetings being held simultaneously outside various workplaces.

Trades Council appeal for workers who lost their tools at the “disastrous Star Motor Works fire” raised a record £258.

Wolverhampton Wanderers given support for coming season along with the comment: “The Wanderers club have always done their utmost to keep the sport clear from all deteriorating influences of the betting evil”.

A year before WW1 starts, the Wolverhampton Worker reports on states begin wars amongst themselves in the Balkans after attack on Turkey “in name of Liberty and Christ”. It’s advice: “if force is still to have its use in the world, let at least it be used by the people against their oppressors, and not by the people against themselves for the benefit of those oppressors”.

Call for railway nationalisation. Engine driver killed due to profiteering. 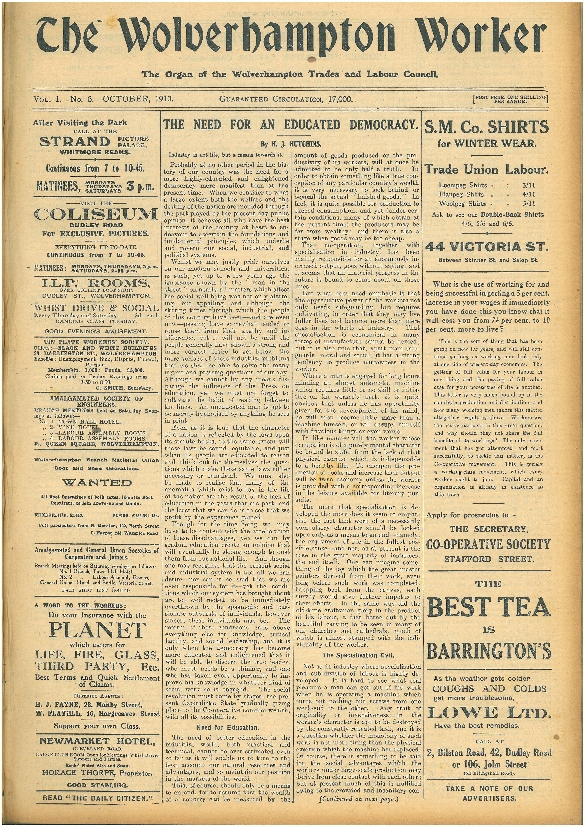 Need for workers’ education, so that “the aspirations of an awakened and educated democracy will express themselves”.

Start of column “Women in Politics” by Marion Phillips, General Secretary of Womens Labour League who later became an MP, leading on the establishment of baby clinics.

Exposure of senior council officials pay rises agreed at a 13 minute meeting, whilst still they had not paid the 4s a day minimum wage (on a six-day week) from June. Comedy conversation with the mayor over the issue.

Letters page, cartoons and reports of distribution of the Wolverhampton Worker. 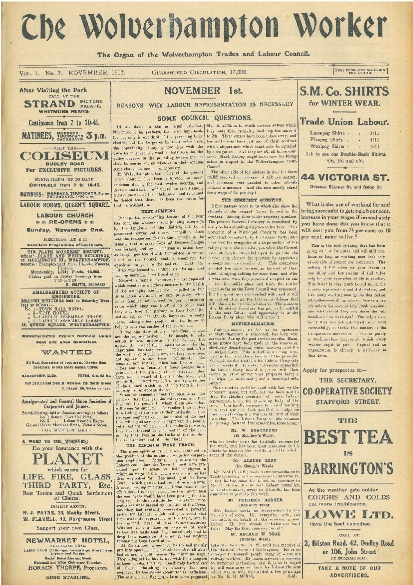 Call for election of 4 Labour councillors in municipal elections along with photos and articles from each candidate.

Report of £20,000 raised by Daily Citizen appeal for workers at Dublin lock-out, paying for food ships being sent via TUC from Manchester.

Other articles include “Is Wolverhampton Drunken?”.

Labour to hold monthly mass meetings in the Empire. They invite this month,”outspoken Labour MP”  John Hodge, who became the first Minister of Labour and claimed that all strikes during war-time were acts of treason.

Drafted-in police brutality at the “Battle of Bugle” in Cornwall as 5,000 china clay workers strike for minimum wage, fortnightly pay and union recognition. 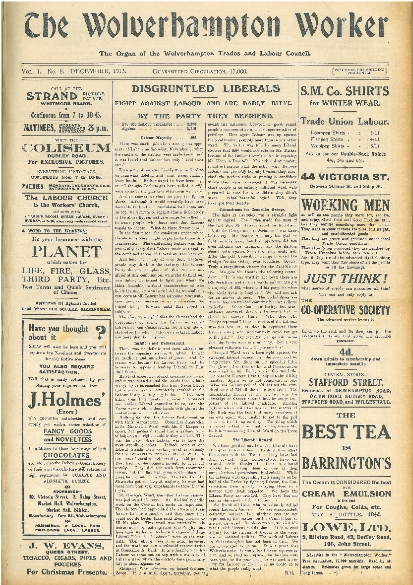 Two Labour councillors elected. In Graisley it was a straight fight against capital. The Tories’ slogan was “Vote for George and no Socialism” won by just 7 votes. Slander by Liberals and their “insidious and underhand” collusion with Tories.

Second column “Women in Politics” by Marion Phillips, General Secretary of Womens Labour League on the exclusion of women in politics.

Trades and Labour council resolution passed against the “menace to social progress and working class welfare involved in war, and the terrible suffering and loss of life” and condemned the government for military build-up. It condemned the British War Trust for profiteering, mentioning an “engineered 1909 German scare” which pushed up military spending. “Britain spends nearly £50m a year on her navy, twice as much as Germany“.

Photos inside local housing and articles on slum housing in new column “What’s the matter with Wolverhampton?“.

More on the PSA brotherhoods.

more editions on next pages