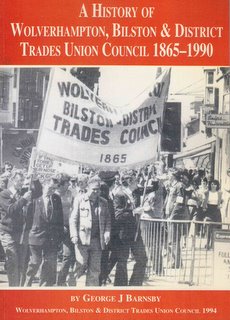 The decision to publish a history of our Trades’ Union Council was easily taken. That it appears some three years after the 125th Anniversary that it was intended to mark demonstrates that it was less easily translated into practice. This is no reflection on George Barnsby who applied himself enthusiastically to the task of writing it and completed the project on time. Thanks also need to be given to Andrew Goodall for all the effort that he has put into the typing up and laying out of this book. The problems come later as we grappled with the organisational and financial problems of getting it into print. Nonetheless, it has been an important and worthwhile endeavour to set down in print the 125 year history from 1865 to 1990 of this one strand of working class struggle in Wolverhampton and the Black Country.

In highlighting the setbacks and successes of the trade union movement over that period it provides an historical context and perspective for the problems which the movement faces today. History does not provide us with a blueprint for the future but it does provide the examples of courage, fortitude and determination of working people that can see us through the difficult times.

The election of a fourth successive anti-trade union Conservative government challenges the movement to produce policies and a leadership adequate to the task. Three million unemployed, opting out of hospitals and schools, attacks on public spending, the destruction of the manufacturing base of the economy, attacks on employment and trade union rights and much more to come as the government grapples with the problems of a massive budget deficit, demonstrates the scale of the task before us.

Of the many issues the book highlights, possibly the most important is that the future which we face is determined by our actions as much as by the actions of others. Workers, trade unions and trade union councils can play an immensely important role in determining the future. By working and fighting together, by defending jobs, by demanding decent homes, education, health and social services for all, by opposing racism we can build a better future. It is that hope that has sustained the movement throughout its history. So long as it is there, then so also will be the organisation and struggle that can bring it about.

Two issues stand out before all others as the keys to success in the current period. Firstly there is the need to rebuild the manufacturing base which can create the wealth which in turn can address the social needs of our society. In the long run, no society whether capitalist or socialist, can spend money that it does not have. If we rule out economic imperialism and the massive exploitations of workers abroad as acceptable sources of wealth, then we have no option but to create it ourselves. A sound manufacturing base is an essential ingredient of long-term economic recovery.

Even more importantly, we have the spectre of racism and fascism once again casting its shadow across Europe. Its presence is felt in this country and marked by a rising tide of racist attacks. As in the recent past it is likely to become even more apparent if Conservative power is seen to wane. Elsewhere in Europe the trend is even more marked, notably in Germany where the collapse of the GDR and an influx of refugees from Eastern Europe and the former Yugoslavia have produced economic and social tensions which are providing a breeding ground that fascists have been quick to exploit. Stemming this incipient fascist tide is the essential priority for the movement today. It is an area which history has much to teach us. We know the price of complacency and appeasement.